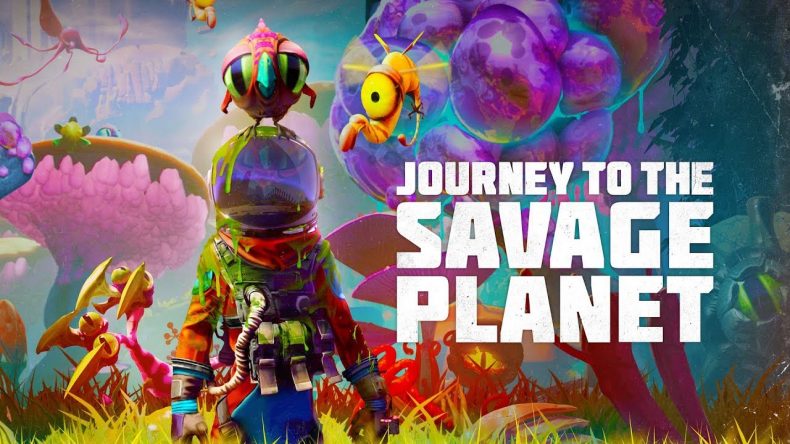 Space exploration games are slowly but surely developing a worrying uniformity. No Man’s Sky, Outer Wilds and The Outer Worlds all share aesthetic elements that could, to the untrained eye, make them fairly difficult to tell apart at face value. For all the potential inherent in crafting an alien planet from the plastecine of pure imagination, there sure is an awful lot of neon violet thrown about.

Of course, if you dig a little bit deeper you’ll see how far each game goes to separate itself from the apparent herd, implementing core gameplay systems and mechanics that really couldn’t be more different. But to many people, that first impression is enough to elicit a non-committal shrug before they file all the aforementioned games into one drawer labelled “Sci fi walking simulators” and go off to play Fortnite some more.

Journey to the Savage Planet attempts to stave off its own trip to the drawer by opening wide and scarfing down specific elements of all of its genre mates, and it doesn’t even wipe its chin afterwards. It borrows the heavily-capitalist future concept from The Outer Worlds, the laser-beam mineral gathering and exploration from No Man’s Sky, and the effortless pacing of Outer Wilds, and wraps it all in a ridiculously charming aesthetic. Even the things that are trying to kill you (which in Savage Planet is almost everything) are bright and colourful and almost cute despite their weird alien grossness. Huge, vibrant patches of vegetation pepper the landscape of the various biomes, gnarled tree limbs twisting towards a pastel sky, tangled, thorny roots burst from the kaleidoscopic grass and a menagerie of weird and wonderful alien fauna hops, flies and prowls between the flora.

Dropped into this world by Kindred Aerospace, who proudly boast at being the “4th Best Interstellar Exploration Company” in the galaxy, your put-upon space adventurer is on a scouting mission to discover and catalogue everything there is to see on this strange new world, even if it kills you – which it will, over and over again, each death forcing your ship to disgorge a new clone and continue the cycle. Upon death you’ll need to locate your dropped backpack and the precious materials within, or in cases where your pack was still empty, “shamefully bury” the corpse of your former self.

Armed initially with just a laser pistol and whatever you can gather from the planet itself (plant spores that explode when thrown, alien mucus that forms a bounce pad when dropped, among other things) you’ll brave the unknown and find, scan or collect samples from everything the planet has to offer. Some of the alien life will run when it sees you coming, some will simply carry on as though you’re not there, while some will attack you on sight, whether they’re alien beasts or particularly vicious species of plant life. Often, you won’t know something is dangerous until it tries – or manages – to kill you. You can alleviate some of the danger by playing in coop, teaming up with another adventurer to press on together. Because you can play the whole game solo, there aren’t many instances where teamwork wins out, but it does make elements like combat a little easier. That said, it seems that the coop is world-specific, so if you join another player’s world you’ll advance their story anf character but not your own, which is a shame.

Progression is handled through the acquisition of various minerals mined from nodes or harvested from aliens and plants, though most of the more significant enhancements to your suit come through the discovery of specific alloys found in various places in the world. Once you have the required materials you can return to your ship on foot or through one of the handy teleporters spread about the landscape (and I do mean spread, as they’re well-spaced) and upgrade. You can improve your weaponry or add new functions to your suit like a double jump and a grappling cable, or improve your helmet’s terrain scanner with, for example, greater range. Personal improvements to health and stamina are earned by finding glowing alien goo eggs and eating them, because why not?

While it’s flogging a dead horse to lament what a game isn’t in a review, I still find it a little bit of shame that Journey to the Savage Planet isn’t procedurally generated. As it stands there is a finite number of things to find, and the different biomes will open up in a fairly linear way no matter how many times you play. While that stops the game from outstaying its welcome or becoming at any point too overwhelming, it would have made a fantastic water-cooler game, like No Man’s Sky but with an actual personality.

But I won’t dwell on what Journey to the Savage Planet doesn’t do, because what it does do has been more than enough to utterly captivate me. I can’t speak for how it runs on console, but on PC I’ve barely noticed load times and I’ve had zero issues with performance. The graphics settings isn’t the most detailed and robust, but there are a few things you can comfortably adjust down to improve performance should you need to, and the cartoony aesthetic means you probably won’t lose an awful lot by doing so.

Journey to the Savage Planet is a much more focused experience than a lot of exploration games and, while you can waste time exploring every nook and cranny – and indeed, you’re rewarded for it – there’s more of an onus on improving and upgrading so that you can reach the next area or return to previous ones with your newfound powers like Metroidvania. However you choose play, solo or with a buddy, there’s a lot to get stuck into and risking your life on the savage planet is never less than charming, entertaining fun.

Multiplayer is world specific
Shooting could be tighter

Journey to the Savage Planet is a smaller, happier version of what No Man's Sky should have been at launch. Filled with things to find, trials to survive and, most importantly, genuine personality.