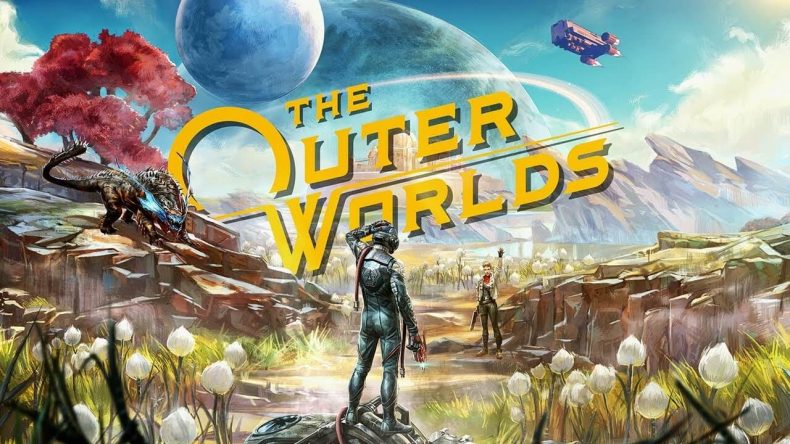 Mistaken identity is hardly a new trope in video game writing, but it’s rarely handled in such a deliberately tongue-in-cheek way as it is in The Outer Worlds. Awoken from hypersleep early by decidedly dodgy outlawed scientist Phineas Welles, your protagonist is bundled into an escape pod and sent hurtling towards the surface of Terra 2 to meet with smuggler and adventurer, Captain Alex Hawthorne of the Unreliable. Unfortunately, after a rather unfortunate series of events, you’re soon calling yourself Alex Hawthorne and taking control of his freighter. Well, once you find a power source to get it back star-side, that is.

Such is the opening of The Outer Worlds, a gleefully grim (or grimly gleeful) space-western set in a far-future galaxy where mega-corporations own everything: worlds, sports teams, human lives. A person is nothing if not employed, and people dance to advert jingles and worship brands, not gods. It’s worth knowing on your way in that this is very, very much a Fallout game in all but name. Fans of Bethesda’s somewhat fallen idol will be instantly familiar with many of the systems, including the ones that have been tweaked like copied homework. For example, the slow motion, appendage-targeting V.A.T.S system is here called TTD, or Tactical Time Dilation, a side-effect of being thawed out of hypersleep so quickly. It works in much the same way, slowing time to allow you to do extra damage to targeted areas, and rewarding you with a slow motion kill cam shot for your trouble. Reward is a big part of The Outer Worlds, in fact, and Obsidian seem to delight in giving you things and watching your little face light up. New weapons and weapon-types come at you thick and fast, you level up at a fair pace, unlocking a new perk at every even level, and you earn XP for everything, even for locating new areas or winning dialogue rolls. The loop takes hold of you early and hangs on tight, even factoring in permanent debuffs called “flaws”, which work counter to perks. If you take too much physical damage in a short space of time, for instance, you could receive a flaw that sees you taking more melee damage from that point on. Some of these flaws can be refused, but if you take them you will unlock another perk point in return, so there’s a cost-benefit analysis to do every time.

Another system that feels similar to a certain other franchise is the dialogue. People face you square on, fully voicing their lines while you select responses from a drop down menu. Occasionally one of your character skills will factor in, such as Perception or Science, allowing you to steer the conversation in your favour. Each skill has a numerical value assigned based on points you spend when you level up, and as long as the number is at least equal to the required value, you’ll win. It’s not a new system but it’s effective, especially as some of the writing is so good. There’s more to the NPCs of the Halcyon system than just giving you busy work to do, and you can push most people you talk to into opening up. Your companions, six in total, have colourful personalities that will react not only with one another but with people you meet and things you do.

Each companion has their own reasons for tagging along with you, and they all have their own backstory and purpose. In addition to just being another gun in a gunfight, they can extend their expertise to you. For example, first recruit Parvati is a novitiate engineer intent on cutting her teeth on the Unreliable’s battered engines, and her presence in the party (you can have two with you at any time) will increase your Engineering skill, allowing you to apply her knowledge to the world and conversations. As a result of this, every foray outside your ship could potentially go differently depending on who you take with you. You could make different allies, avoid a tough fight, or completely ruin your standing with one of the various factions. I don’t know how deep it goes, but the potential for replayability is high – which is a boon, because The Outer Worlds isn’t a 60-hour open world epic. Areas in the game are separated, and you’ll need to travel between each one in a way more akin to something like Dragon Age than Fallout. Many towns have vast areas around and between them that you can trek across, but sooner or later those areas will be walled off and you’ll need the Unreliable to go further. Exploration is vital, though, as you’ll encounter scores of side quests and hidden curiosities, not to mention local wildlife that evokes memories of Borderlands. Almost everything you kill or search will yield something worth collecting, from weapons and armour to vendor trash, crafting materials, and collectibles. The various locales of The Outer Worlds are fizzing with flavour, from data-pads and terminals you can hack to NPCs with stories to tell.

As you progress through the story you’ll align yourself with one or more factions vying for various end-goals, either greater control of the System, freedom from oppression or maybe just better quarterly finance reports. You’ll investigate relay stations that have lost communication, deal with infestations of alien horrors, come into possession of a shrink-ray, and save the residents of a space station from being cooked alive. Maybe you’ll work out why there are suddenly woolly-haired cows in your engine room, which had me stumped for a while. Or you might not do those things; the important take-away is that your choices will shape the story you tell around the water cooler with your friends, and you may find your experiences very different to theirs. Stealth plays a part, too, offering you even more ways to approach situations. Interestingly, you’ll receive a device early on that projects a holographic cloak around you, which allows you to disguise yourself as various different guards or personnel provided you have the data card to do so. It’s a cool system that not only adds tension to infiltration, but forces you to use your wits if you get found out, as you’ll be given three opportunities to talk your way out of trouble.

Of course, such choice and variety often come at a price, and that price here is performance. I want to be clear that compared to other games of the genre, The Outer Worlds feels refreshingly polished. NPC models use the character creator, but the lip-synching and expressions are above average – as are some of the performances (Parvati in particular stands out for me). The issues instead manifest as drops in frame rate, and texture pop-in, both of which are noticeable and frequent in certain areas. The latter is a particular problem on the inventory screen where it takes several seconds to apply textures to your protagonist’s armour. I haven’t encountered any actual bugs or glitches though, which is surprising considering how beautiful The Outer Worlds looks a lot of the time. Environments do reuse assets quite a lot, especially in settlements where you’ll often see the same exact room with some of the furniture rearranged in two different buildings, but, my word, some of the sky-boxes are breathtaking.

Ultimately, if you’ve played a Fallout game before, you won’t be surprised by many of The Outer Worlds’ systems and features, but each familiar idea is tweaked just enough to feel different if not unique. A wealth of side quests and places to explore ensure that you can never quite predict what’s over the next horizon, and some surprisingly intelligent and thoughtful writing shoots a bolt of maturity through the satirical atmosphere that provides levity and occasional pause for thought. The retro-futuristic, space western style may be nothing new in 2019, but The Outer Worlds approaches it with such undeniable charisma that you can’t help but be drawn into its colourful, diverse universe. And what’s more, it’s so confidently written and lovingly made that you’ll almost certainly want to go back for another adventure when you’re done.

A spiritual successor to Fallout: New Vegas in every way, The Outer Worlds is better written and more polished than we've since come to expect from the franchise it emulates.