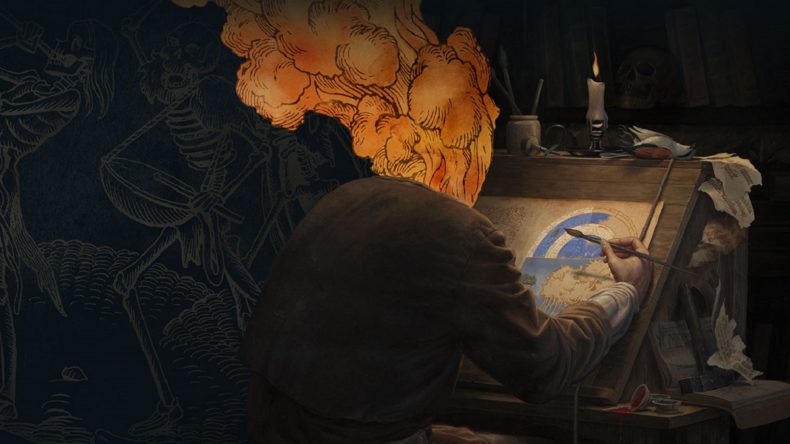 I’ve never played anything like Pentiment before. It can be clearly defined as a choice-based narrative driven game, but its presentation in every aspect is both fresh and enticing, like a hefty series of novels that keep you turning the page with every new revelation. It is rich with lore, both historical and story-related, feeling old and new at the same time, with an art style that is unlike anything I’ve played before. Not only does it look vastly different to other titles that fall within the genre, it is helmed by one of the most prestigious studios when it comes to dialogue, storytelling, and deep character crafting.

Many players will fall off Pentiment early. Not because it is a bad game; far from it. It requires plenty of patience in reading through every conversation and detail, and that punch of excitement comes in more subtle bursts. You don’t swing a sword, jump across ravines, or immerse yourself in a menagerie of movement or combat, but rather, you use your brain as the weapon; your powers of deduction; your wit and candour; your observations and knowledge. There’s a lot of reading the words of others and texts from various tomes, and it might not be what people expect.

Regardless of that fact, Pentiment is thoroughly enjoyable. The characters are well-written and interesting, providing Andreas, the game’s protagonist, with a list of NPCs to get to know and even become friends with. The story takes place across many years, and as you progress through the story, small changes to the town of Tassing become apparent in subtle yet smart ways, and the power that the Abbey has over the town starts to show through rising anger and frustrations from the townspeople. There’s an incredible amount of detail in everything, and the more you learn and explore, these changes regardless of how insignificant they might be, highlight the quality in the world’s construction. 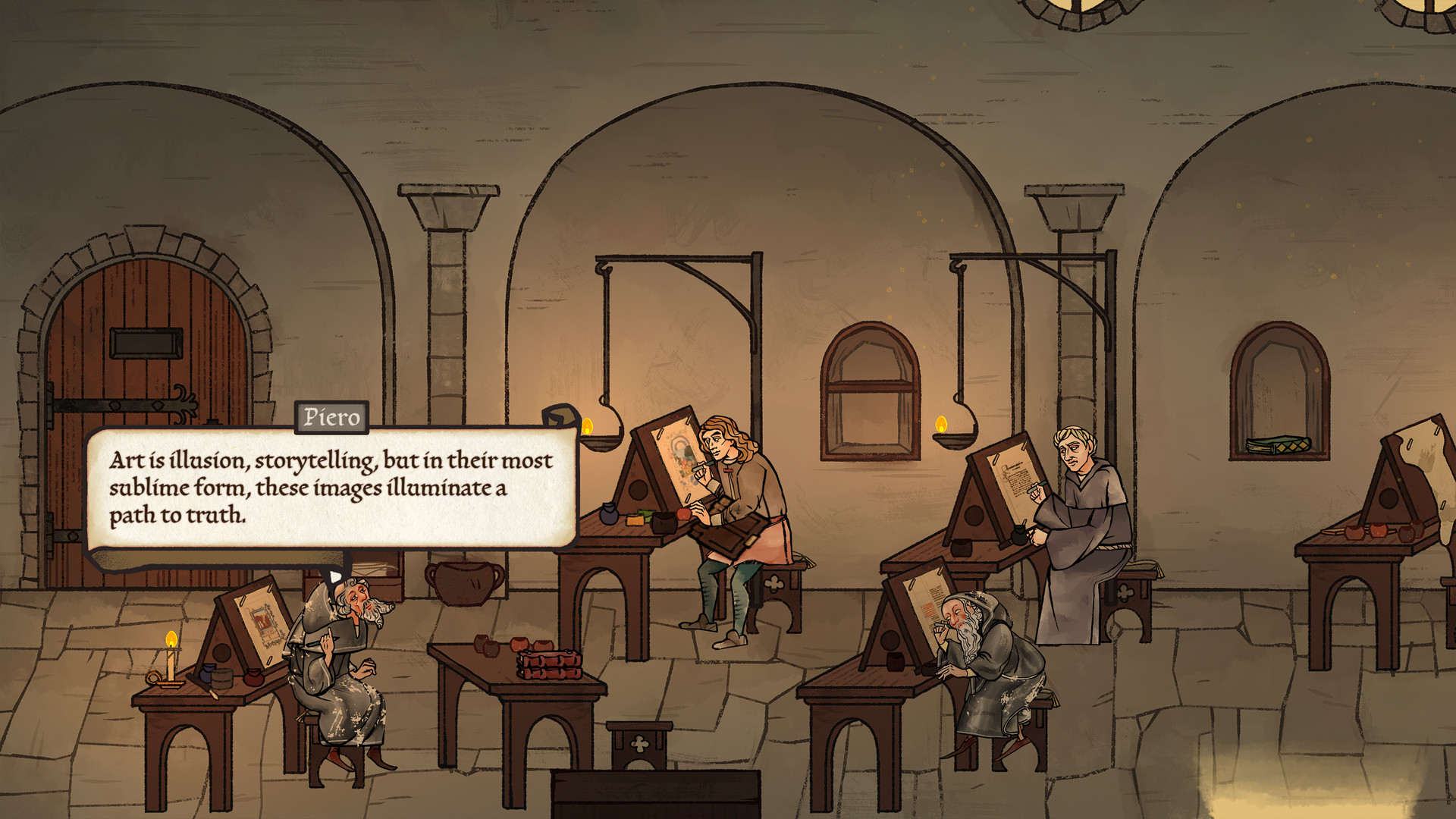 Upon returning to the town after studying in Europe, Andreas Maler continues to work on his paintings within Kiersau Abbey. You get to shape Andreas throughout Pentiment by making decisions based on his past, or what he’s been up to when not currently controlling him. My Andreas was a hedonist who enjoys women and wine, but also finds fascination in nature and all of God’s creations. He had a great knowledge of Catholic theology, and knew a fair bit of Italian and French. When conversing with the locals, certain options become available due to your background, and I can’t help but wonder how my different choices for who Andreas could’ve been would influence the story.

It isn’t too long after Andreas’ return until a Baron is murdered within the confines of the monastery, and you are tasked with uncovering just what happened to him. Father Gernot is convinced it was Brother Piero, one of your dear friends, but can you convince the Archdeacon it was somebody else? By questioning the locals, finding clues within parchments, completing minigames, and investigating various locations within Tassing, you must try and find out who the real culprit is. This is only the beginning of the game, and the repercussions of your findings end up impacting everything that comes after.

What makes Pentiment so enjoyable is getting to know the townspeople and building bonds with them, or harbouring reservations about some of the more shiftier ones. What unfolds isn’t as simple as who the murderer is, rather why someone might be pushed to murder. Some of the important figures within Kiersau Abbey aren’t exactly holy, as you’ll find out. One instance had me truly shocked as I watched it unfold, leaving me to try and run away so that the two in question didn’t find out it was me who watched them get up to something they shouldn’t. Whatever you choose or however you react to a certain situation leaves you feeling the weight of your decisions, and it’s that guilt that I struggled with. 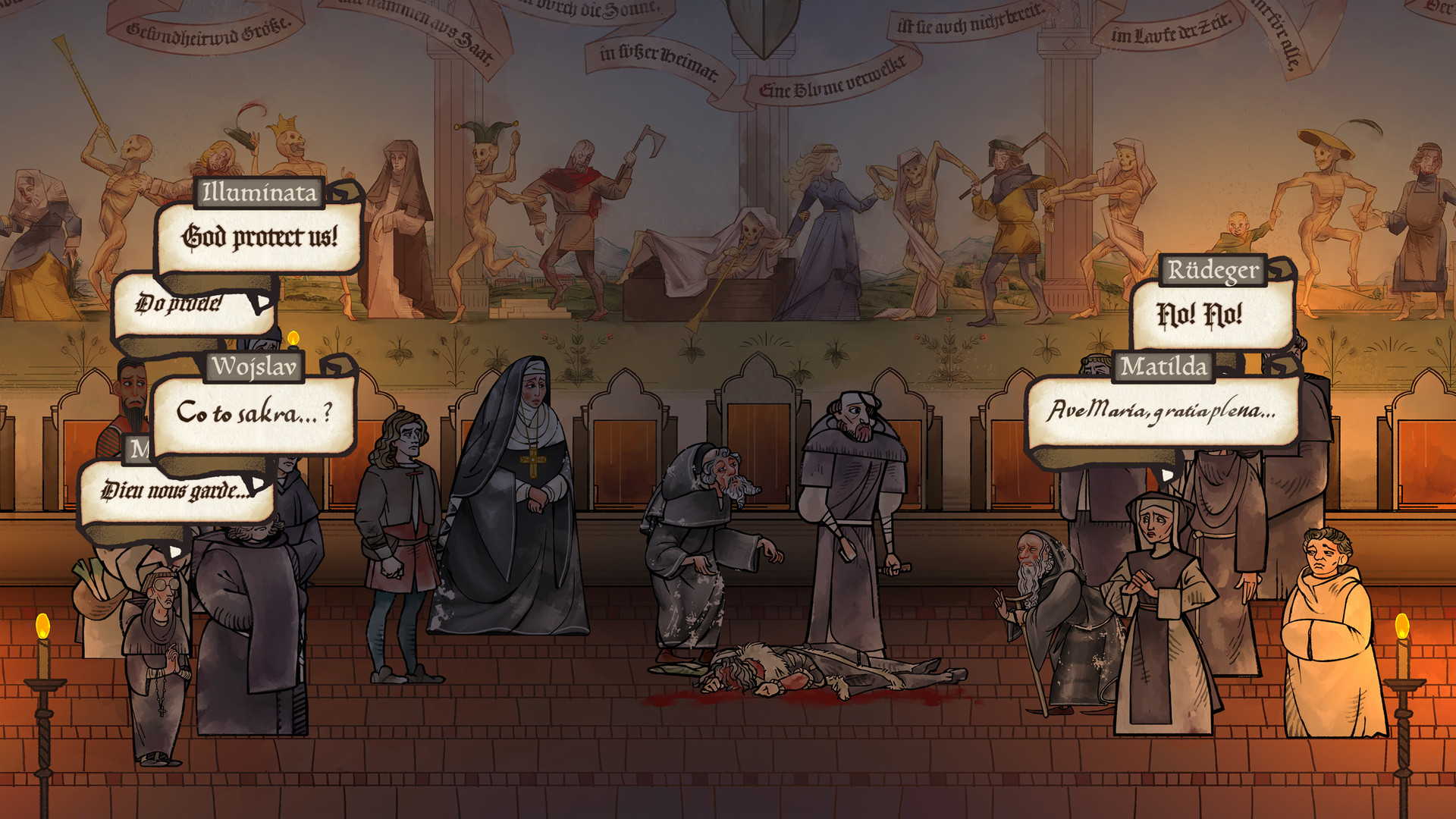 Pentiment has such a strong foundation that it is able to sprout so many roots that grow into every part of Tassing. Whoever you chat to, be it Otto, Lucky, Mother Cecilia, the Gertners, or the troublesome Martin, you’re left with an opinion of them. The characters are linked in many aspects, and these revelations are what keeps you engaged in finding out more. To have a game with no dialogue yet leave you with strong feelings towards the cast is a testament to the hard work the thirteen individuals at Obsidian have done. Some characters might not feel overly important in the beginning, but the more you learn, the more enticing the plot becomes.

The art style of Pentiment is wonderful, and it flourishes in the smallest detail. Just from looking at the overall environments and character designs, it evokes memories of old manuscripts and historical artwork, but that feeds into simple things like the font used during conversations. Depending on who you talk to, a different font appears, and each line starts off thicker and blacker but fades as the lines go on. Any religious mentions like ‘God’ or ‘Lord’ are highlighted with red in keeping with the times, and characters make errors in their spelling as if the handwriting is being done in real-time. It is this attention to detail that makes you appreciate the effort gone in to making it looks as good as it does. 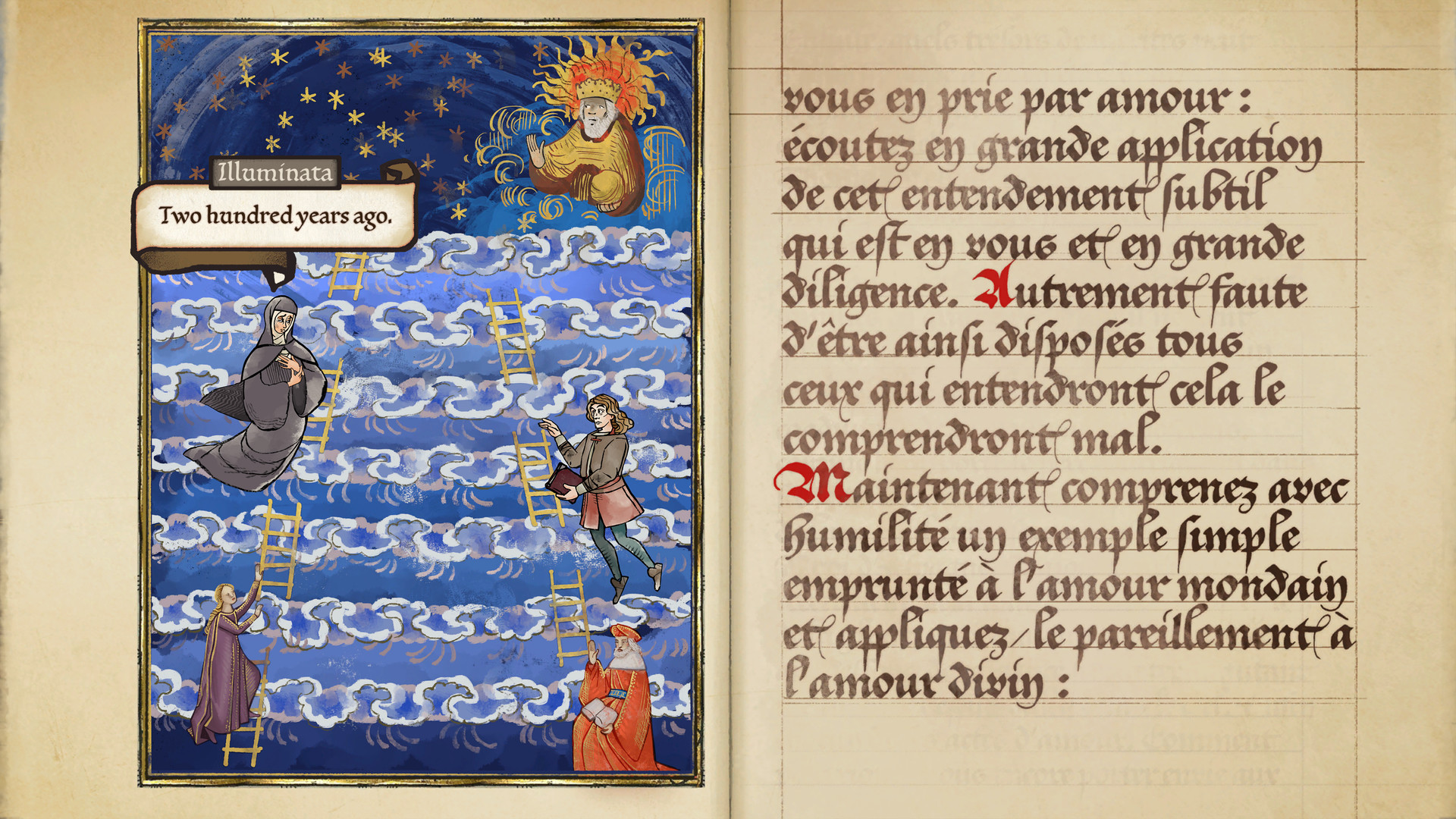 The paintings and pages in books all have an authentic style and look to them, as does the time dial to signify the change in the time of day. Everywhere you look, its art is mesmerising and unlike anything I’ve seen before. The menu is rich in detail and lore, proving insight into names or words highlighted with a red line during conversations, allowing you to read up and learn about what has been mentioned. Characters all have biographies written about them which change as you progress, with a glossary clearly specifying some of the overarching story’s finer points. Even missions are clearly detailed to help you know where to go, with a map to assist you of the locations of certain houses or establishments that need visiting.

Despite me enjoying Pentiment a great deal, there were times when the text did feel a bit too much. This became more apparent when I had to keep going to various houses to eat. A conversation would ensue around a table, and with every bite, the conversation would continue on. Sometimes, it felt like too much exposition and not enough context. While this isn’t necessarily a bad thing, it just seemed to happen a little too often. What manages to break up a lot of conversations is the various minigames you might have to take part in, and while not difficult, they serve that purpose well. Some might be as simple as spinning yarn, while others are more detailed like solving a code. Either way, they are a nice departure to some of the text-heavy moments.

Pentiment tells an engrossing story by allowing you to talk with countless characters who are all deeply rooted in the town. Their plights and frustrations, their sorrow and disappoints, and their joy and happiness are all explored, and they help to tell a much greater tale of a town oppressed by the Abbey. By making some tough choices along the way, you’ll potentially regret decisions or think twice before trusting, and it is this facet of the game that made me fall in love with it. When the art work is so sublime, and the score hits in all the right places, there are few titles out there quite like this.

Pentiment is a stunning piece of work, with a rich story, gorgeous artwork, and fleshed out characters that keep you hungry to learn more.