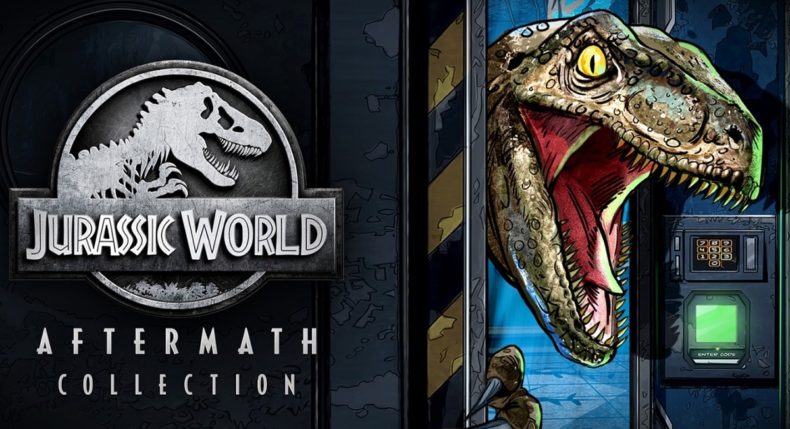 Released previously on Oculus Quest, it’s clear it was made for VR. It made complete sense to create a game where you’re forced to survive in the remains of Jurassic World, hunted by raptors and other dinosaurs, feeling as if you’re right there in the thick of it. Jurassic World Aftermath Collection combines both parts of the original game into one complete package, but the transition to Switch doesn’t quite hold a candle to what players experienced in VR. What starts off as dread-filled dashes across different areas of the facility becomes tedious, as threats begin to become more of a burden than a catalyst for a potential freak out.

After your plane crashes on Isla Nublar following an attack by a pterodactyl, you’re left all on your lonesome. An early encounter with a Tyrannosaurus Rex sets the tone for what should be a nerve-wracking experience, and in the first few hours, Coatsink has managed to do just that. With the help of geneticist Mia Everett on the other end of a two-way radio, you become her obedient servant, venturing around the facility to locate her life’s work. She’ll apologise for making you do the things you have to do, but will still get you doing them anyway, mainly because her work is of the utmost importance. 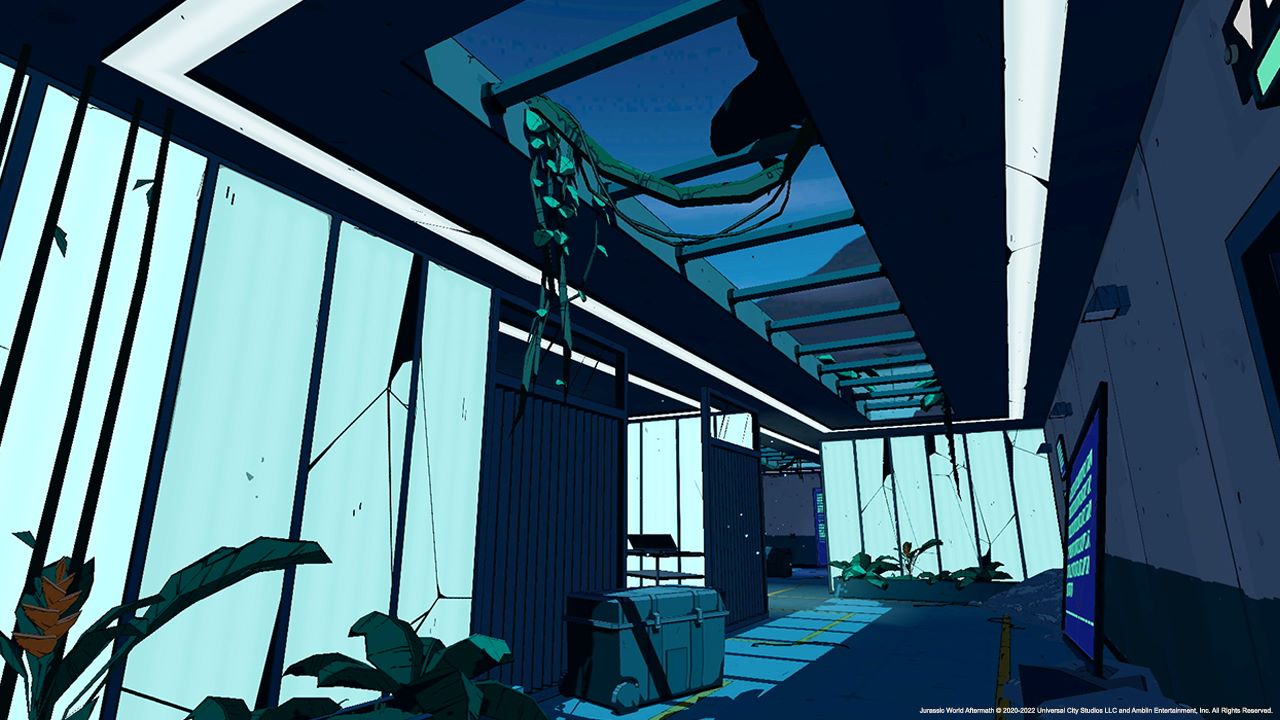 The story is filled in with various audio logs and conversations with Henry Wu, that once sweet scientist-turned cartoon villain we see in the World franchise, as well as some fan service from the wonderful Ian Malcolm AKA Jeff Goldblum. It’s a fairly paint-by-numbers plot, filled with typical jump scares and tropes seen throughout the six movies, but they’re executed fairly well. Playing on Switch, it’s clear how they would have worked infinitely better in VR, especially when you’re hiding from the velociraptors. That’s pretty much what you’ll spend most of your time doing, and while taking cues from games like Alien Isolation, it doesn’t quite maintain that level of terror.

There are some other familiar dinosaurs that pop up throughout, such as Nedry’s best pals, the Dilophosaurus, but the majority of your time will be spent evading the raptors. You can hide in cupboards, closets, lockers, and other containers to make sure they don’t find you, as well as distracting them by hacking into various electronics to take their attention away from you. It’s a neat idea, and it helps to give you some distance from them, but I often found it frustrating more than scary. They are also pretty dumb as well. On multiple occasions I would hide just as they were right near me, as if I turned invisible the moment I crawled inside. I also found the pace of movement too slow even when running, which could have been improved upon since making the jump to Switch. 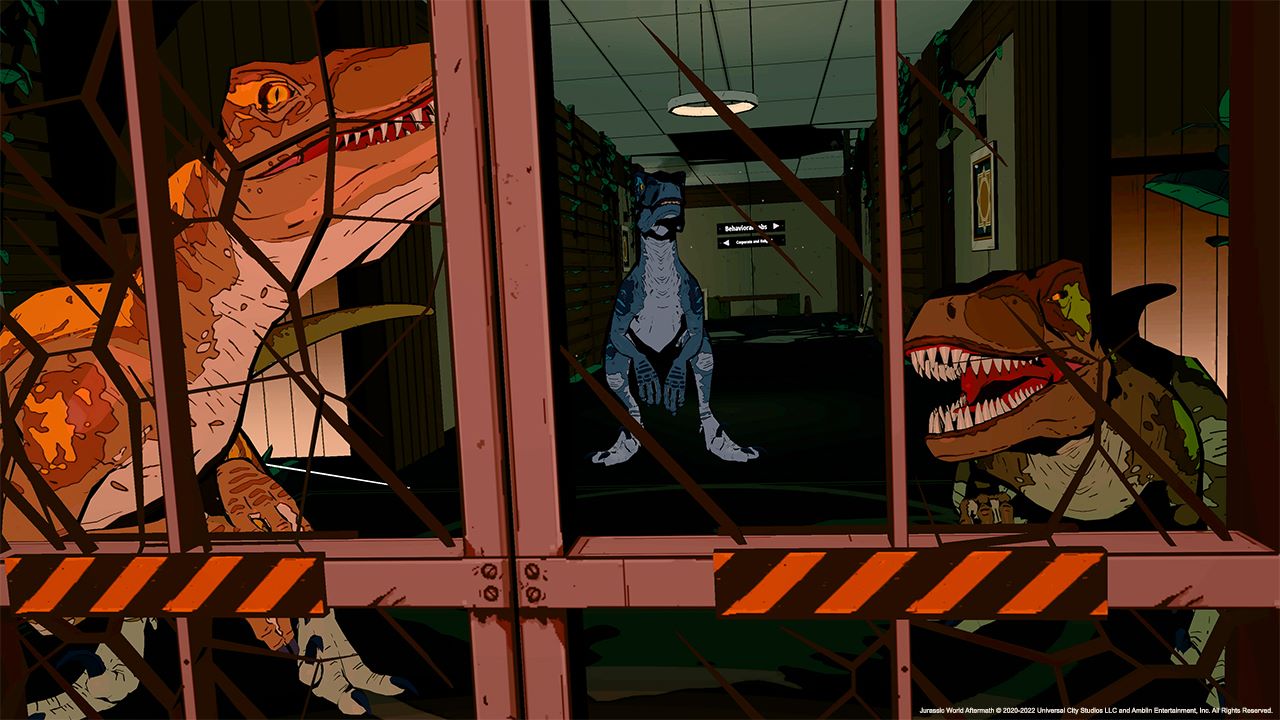 There are some simple puzzles involving electronic locks on doors, where remembering patterns on a keypad or matching frequencies would open them. Other puzzles followed simple formulas, which aren’t intended to tax you, but rather have you doing something else when not running for your life. Computer terminals sometimes need hacking, and missing parts for machinery need finding. It’s all a touch arbitrary, but that makes sense in VR as there’s more immersion. On Switch, they just feel a bit pointless.

The sound design in Jurassic World Aftermath Collection is superb, remaining faithful to the movies in every aspect. The snorts and shrieks of the raptors, the roar of the T-Rex, the eerie hooting from the Dilophosaurus – it’s all spot on. The soundtrack is strong, too, featuring John Williams’ exceptional score to elevate moments of success and awe. It’s not a bad game by any means, but it doesn’t quite have the same impact it did on Oculus Quest. Despite some excellent voice acting thanks to the wonderful Laura Bailey and genuine moments of excitement and panic, it becomes a bit too familiar and frustrating.

While Jurassic World Aftermath Collection has some strong points, it doesn't quite do the game justice like it did in VR.