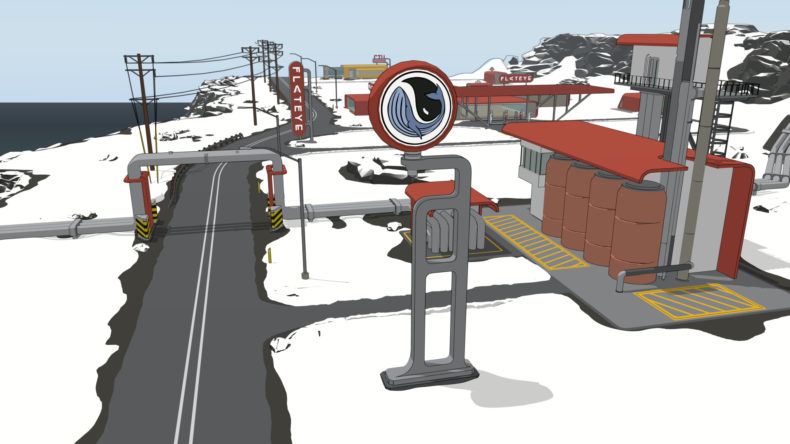 Flat Eye is a strange game. It’s a post-apocalyptic store management sim in which you obey the whims of a corporate AI to govern a cutting edge store in Iceland. It’s shot through with socio-political musings, anti-consumerist themes, and a multitude of not-so-subtle digs at the world we live in now. It’s also nowhere near as clever or hard-hitting as its developer believes it is.

From the off, there’s an air that someone set out to make an edgy, courageous study on the horrors of the Big Corporation. We’re all just commodities and those in power don’t really care about us, etc. It’s certainly a worthy goal, but it’s not exactly lifting the curtain on anything we didn’t already know. A trigger warning before the title card suggests we’re in for some troubling revelations, and there is talk of potentially upsetting subjects such as suicide, climate change, and gender politics, but there’s little that’s actually shocking in Flat Eye.

A story accompanies your first days as manager of the Icelandic store, but it will take some time to piece together and once you do, it’s a little nonsensical. It may or may not involve time travel, and shady goings-on behind the scenes of EyeLife, the global storefront that controls your life now. 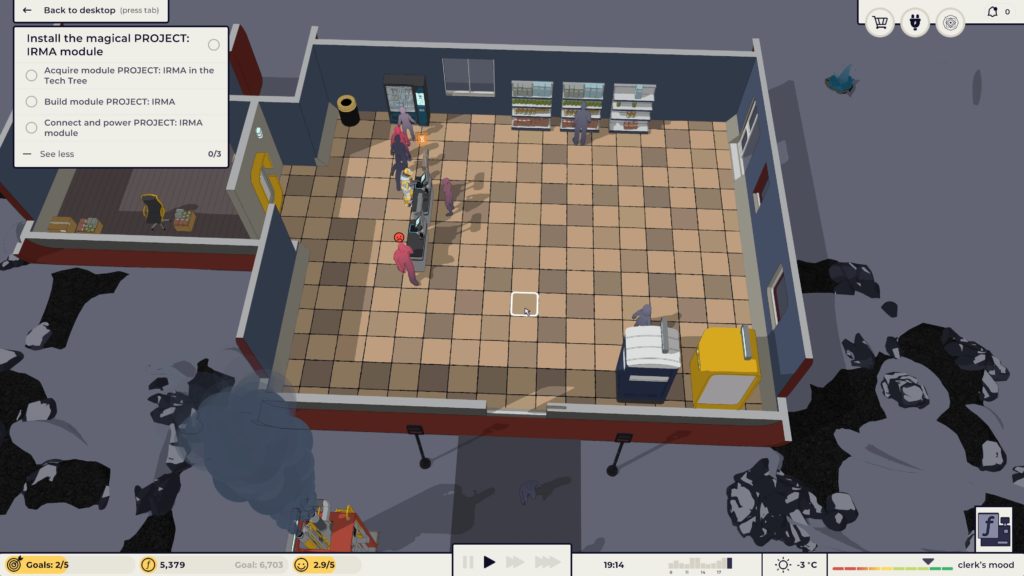 The minute to minute gameplay is somehow both incredibly busy and oddly relaxing. As customers come and go you must direct your store clerk to work the register, maintain and repair modules and power supplies, restock shelves and dispensaries, and deal with “Premium Customers”. As you progress you’ll unlock new modules and machinery that can automate aspects of the job. There are mirrors that take biometric readings of customers, smart AI cash registers, a walk-in “Doctor” booth, and self-scanning vending machines.

Each new installation requires either power, a network connection, or both, while some also provide them. It’s up to you to manage the power grid and keep everything operational. Without a doubt, this is where Flat Eye excels. The store management element is hectic enough to keep you focused, but has relaxing lulls now and then where you can get things done.

You’ll need to manage your Clerk’s time, allowing breaks to maintain their happiness and, therefore, productivity. They’ll also need training to avoid workplace accidents that end your day early and reduce your all-important revenue. If they die or quit, which happens from time to time, you need to hire a replacement and begin again. Each day offers two or three random challenges such as installing a set number of new decorative items or achieving a specific revenue, which keep things feeling dynamic. 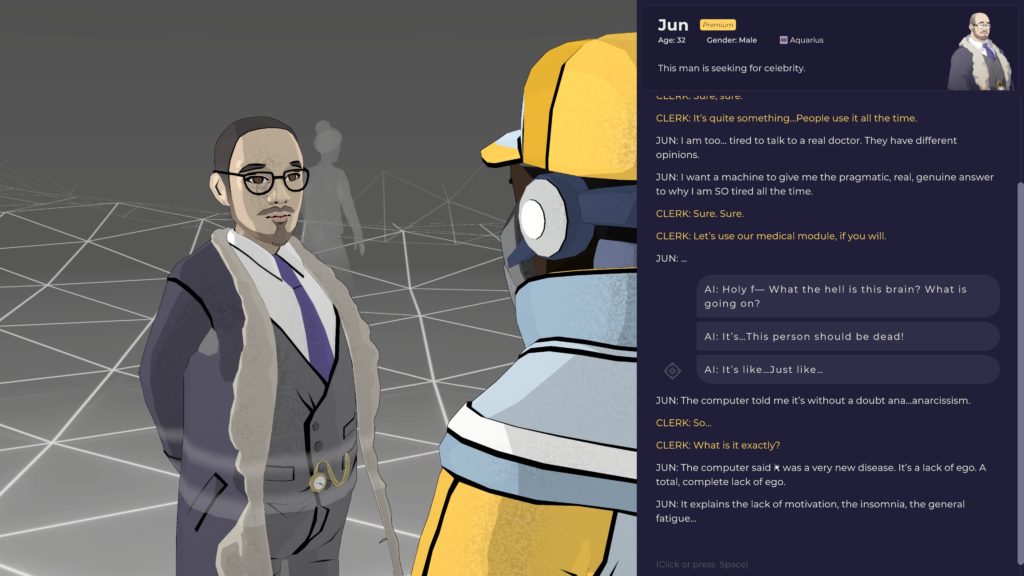 The other half of Flat Eye is less appealing. Before each working day you can use your desktop to surf various corporate websites, assign training or pay increases for your employee, or answer emails from other managers. These conversations are always over-laden with subtext, none of which is nearly subtle enough to be fully effective. There’s an underperformer who asks for advice and bemoans his lack of success, a cocky supervisor with no respect for the workers, and a constant parade of new CEOs suggesting that it’s even more brutal at the top. In the background, there’s the AI, who appears to be using EyeLife as a way to analyse, study, and ultimately control humanity.

To this end, you’ll be instructed to deal with the aforementioned Premium Customers. These named characters come in from time to time to ask probing questions, inspect new technology, or outright challenge EyeLife’s corporate doctrines. The writing is weird: no one talks the way human beings talk. Again, it’s all over-thought musings on the human condition, and you’ll need to pick the right responses (or trust your Clerk to do so) if you want them to come back. But you won’t want them to come back, because they’re all pretentious twats. Maybe it’s the point, but few of these characters are likable, relatable, or believable. The only one that really comes close to any of these is a mascot from a rival store dressed as a pink hippo. I hesitate to even criticise it too heavily here, in case I’m just not getting the joke. 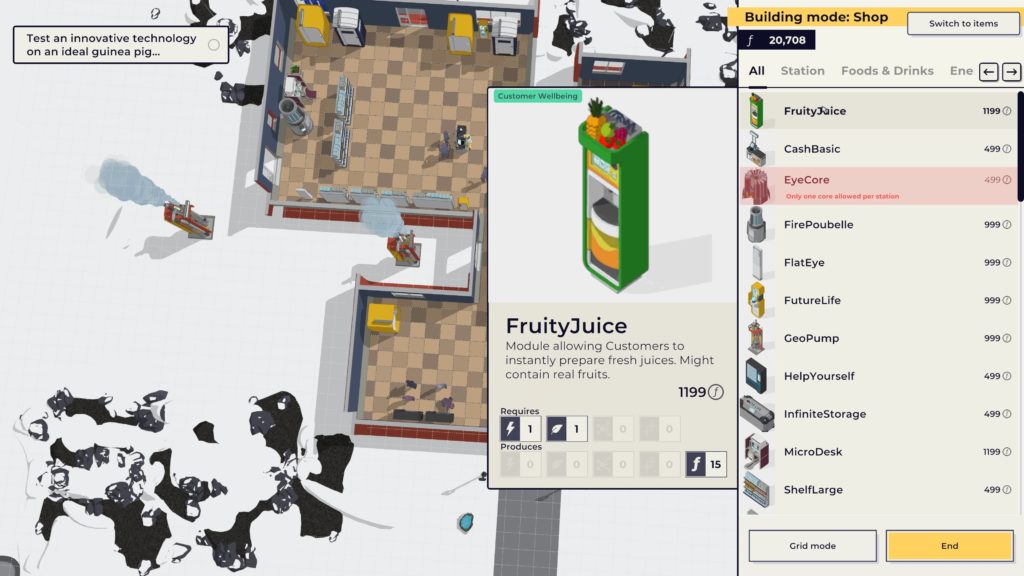 Either way, talking to them is the only way to advance the story and uncover the sinister truths behind EyeLife. But it lacks any kind of real impact; nothing feels like it has stakes attached, and the story feels almost at odds with the simple, addictive and challenging store management gameplay. Although, that too is often plagued by little bugs and glitches. The clerk’s AI isn’t always great, sometimes struggling to remember how to stock shelves or take a break. It can be annoying when you’ve limited windows to do either.

Flat Eye’s deliberately sterile aesthetic is striking, and invokes a sense that the people roaming around your store really are just faceless consumers. It’s not without its ideas or occasional charms, but in trying so blatantly to be challenging and provocative, the developers may have overplayed their hand. It’s at its best when it’s being a store management sim, but often stumbles over its clumsy attempts at social commentary.

Flat Eye is not without its ideas or charms, but in trying so hard to be provocative, the devs may have overplayed their hand.