Return of the Obra Dinn review 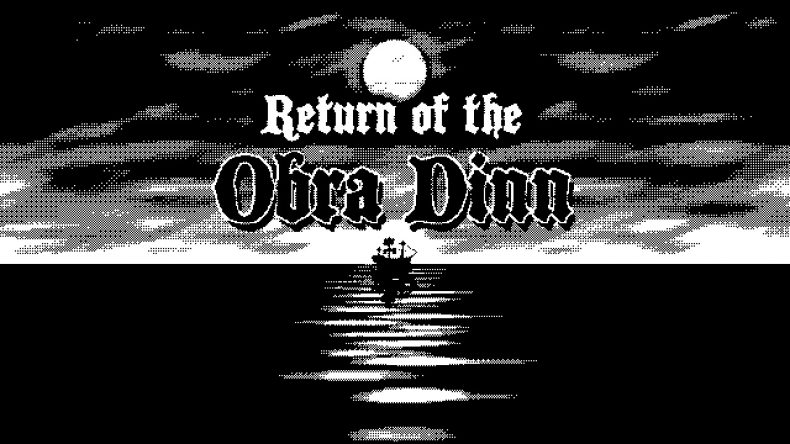 It’s remarkable that a game like Return of the Obra Dinn exists due to the amount of detail and effort put into it by just one person, but it is from Lucas Pope, the creator of the PC classic Papers, Please. As mindblowing and inventive as it is, you’ll spend hours after watching all of the 60 crew members fate unfold, trying to solve how each one died after the ship docked in Falmouth in the 1800s. It can be laborious at times, and more often than not you’ll rewatch the same memory time and time again trying to uncover a clue you may have originally missed, but it’s more than worth it.

You are tasked with finding out what happened to the crew of the ship, and as you make your way around each deck you’ll find a lot of skeletons linked to particular memories you can revisit thanks to your magical pocket watch. The memories feature a few lines of text on screen along with voice actors reading them out, but each scene is frozen in time. You can move around each one looking at who was present at the time of death, and to see if there’s anything that might show you what happened. You’re also listening out for any important names mentioned, the nationality of each person, and the cause of death (if obvious). You can then cross-reference everything with your book that has a recap of each ‘story’, showing you the main death of that chapter, and who was present at the death. The book also contains a crew manifest of the names and nationalities of everyone on board, and a map that shows you the location of where the bodies were found dead. You can also see a couple of pictures that shows everyone on board that can highlight potential roles or jobs of the crew, and who might have been friends with one and other.

There’re a number of stories split up into chapters, and these are essentially the memories you get to explore when using the pocket watch. There’s no way at all you’ll be able to solve each fate before you’ve watched them all, and even after you’ve seen each one it’ll take hours before you make significant progress. As difficult as this may sound, the need to solve the mysteries surrounding the crew becomes an addiction. Through excellent storytelling and amazing detail in the seldom talking sections, the genius comes in the information you don’t always notice straight away. The devil is in the details, after all.

The sound design is exceptional, whether from the superb voice acting or movement of the ship or the crashing of the waves. There’re science fiction elements to the story that manage to make this more than a simple murder mystery, and once you encounter these it becomes an even more fascinating story than when you first jumped in. As you make your way across each deck, you’ll have moments where an idea pops into your head, or a new lead presents itself to you, and this happens solely through your own craving to uncover the truth. I’ve never played a game this engrossing, and it’s the second game ever that has had me crack open the notebook (the first being The Witness) scribbling down my thoughts on what was going on. Although you have plenty of freedom in moving between the different stories, when you first uncover the chapters then move from one to the next effectively. It’s important not to get too wrapped up in solving them straight as you’re more likely to be wrong, however, different stories may have clues that help you to find answers to another one. It’s meticulously crafted that it’s amazing how Pope didn’t get lost in his own ambition – but it never happens. The satisfaction of solving each case is unlike anything I’ve felt before. Another feature that Return of the Obra Dinn features is the reveal of three solved fates at a time, meaning you have to at least 90% sure you’re right or else you’ll keep going around in circles trying to get it right.

The 80s computer aesthetic is a unique choice that only improves the overall game. Giving it a retro feel harks back to those old school detective text-based murder mysteries and consistently keep it engaging every second you spend with it. With a lack of colour you’d think finding bodies might not be too simple, but thanks to the pixelation that surrounds clues or people it’s quite easy. The only real problem I have with Return of the Obra Dinn is some of the explanations of the fates that make it difficult to pinpoint how someone died. For example, clubbing and striking can be construed as the same thing, as can someone falling overboard and falling off the rigging. There are characters that do indeed suffer these fates, and with the ability to solve three at a time it can make this frustrating, especially as you have so many deaths to solve.

Return of the Obra Dinn is a work of genius, providing an engrossing detective game drenched in ambition and detail. You’ll spend hours trying to solve the mysteries surrounding the crew’s death, and whilst it can be arduous doing so, you’re never left bored. There’s no doubt this is one of the best games I’ve played this year, and thankfully those who didn’t get to play it on PC last year can now do so on console. I can’t believe I missed this first time around – don’t make the same mistake I did.

Some of the descriptions of character fates isn't clear

Return of the Obra Dinn is finally on consoles, and if you've never played it before you need to play it right now.