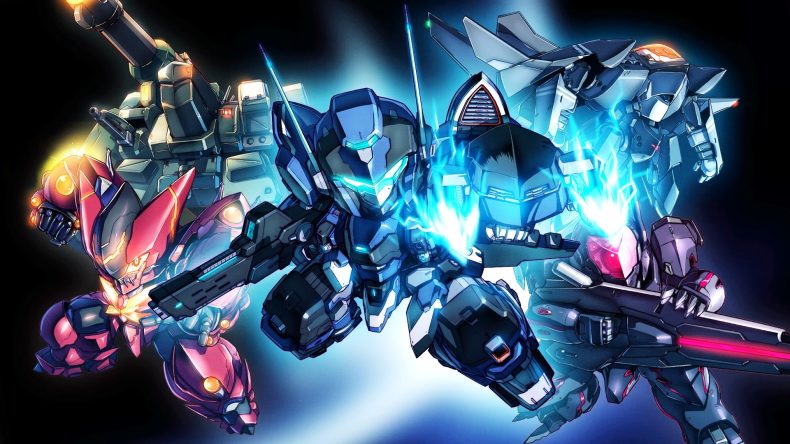 Everyone (well, almost everyone) loves a good robot fight. Whether it’s Transformers, The Iron Giant or Pacific Rim, robots beating the grease out of something, or each other, is almost always a win. Enter Hardcore Mecha, the Gundam Wing-esque side scrolling mecha action game from RocketPunch Games.

Sometimes you hear a game’s title and instantly conjure up a mental image, and it’d be hard to imagine wrong with Hardcore Mecha, which is not a bad thing. While Hardcore Mecha doesn’t really bring anything new to the table for the genre, it’s a solid, fun game. Right from the moment the title screen music kicks in, you know you’re in for a good time with the opening mission taken right from a mecha anime episode. To be honest, the whole game could have easily been transposed from an anime series.

You play as Tarethur O’Connell, a mercenary working for Hardcore Defense Corp, who have taken a job from the U.N.F to find and resuce their lieutenant, “A”. That’s only part of the story for Hardcore Mecha, but you can be sure the whole game is full of the robot shooting, smashing, explosive action you’d expect from a game of this type. There’s a bit of a learning curve when it comes to handling your mecha as RocketPunch have utilised every button on the PS4 controller. This can get a little overwhelming when facing multiple enemies, as I found out when I hit the boost button instead of block and propelled myself into a mass of bullets. Possibly more than once….

Luckily there are training options available to take you through the basics like moving and flying, shooting, dashing, melee combat and using your ultimate skill. If you aren’t used to this genre the training will prove invaluable and give you plenty of practice.

You’re also given the option to upgrade your mecha via the Development menu, with new upgrades and extra slots for those upgrades becoming available as you level up. New upgrades are purchased with the coins you collect throughout the levels, whether that be from blowing up other mechas or finding them in various crates. Although there are 18 levels over 8 chapters, which sounds a lot, I never found myself getting bored, as each level seemed to be the perfect length. There’s also enough variety to keep them interesting. For example, around the halfway point there are a few levels that are reminiscent of side scrolling space shooters à la R-Type. It brought a nice change of pace.

One thing did detract from the enjoyment of the story, though it’s something that never usually bothers me. The audio is in Japanese, and while that’s usually fine, at certain points there was a lot going on. Trying to read subtitles while being attacked from all angles meant I missed a fair amount of story development. I couldn’t concentrate on what was being said as I was too busy trying to not be blown into a million pieces. I don’t think I missed anything crucial but the fact I missed anything was an annoyance.

The single player story isn’t the only thing to keep you going, though, with a few other options available to sink your teeth into. The first of these is Simulation mode which does require you to finish the story first. This is essentially a survival mode with waves of enemies coming at you until you die. You can upgrade your mecha with points accrued during the waves, going into things like health, melee attack power, gun attack power, etc… Eventually you’ll level up enough to unlock new, exciting mechas, each with their own abilities and looks. There’s only one style of online multiplayer and that’s the Free for All mode. You can have up to 4 players in a match but I only ever came across one or two other players, which will hopefully increase. You have the choice of piloting most of the mechs you come across in the story for multiplayer with others being unlocked as you level up.

Each mecha has its own advantages and disadvantages. If you pick one that is super strong chances are it’ll be heavy, meaning trying to get it to fly or boost anywhere will see you just about managing to hover an inch or two from the ground. Conversely if you decide to go with a mecha with high mobility it won’t hit as hard as the heavier choices. Whatever you pick, you will get to change your mecha every time you die, so if one particular mecha isn’t working you’ll have plenty of opportunity to mix it up and find the right mecha for a counter attack.

There’s also a practice room to give you a chance to try out your available mecha units against bots, with each doing various things. For example, some stand still and do nothing, while others will stand still and shoot or move about and shoot. There’s something that will test most eventualities. The multiplayer itself is fine. The matches are short, lasting 3 minutes all in, and while free for all can be fun, when it’s the only mode available it can get quite stale quite quickly. Add to that the fact it doesn’t seem to level or skill match which can make for a quite daunting experience. Especially if there’s a higher skilled player taking you out before you can figure out what is going on. There is the option of local multiplayer for up to 4 players, which is exactly the same as the online multiplayer option but with a quarter of the screen.

Hardcore Mecha is defintiely worth picking up if side-scrolling robot-smashing is up your street. Even if it’s nothing you’ve considered before, I’d highly recommend trying it if you’re looking for something different. The campaign isn’t too long, lasting around 5 hours, with each level available to play as a stand alone level. Hardcore Mecha is a good choice if you’re looking for something to dip into but only have a short amount of time to play something.

Hardcore Mecha doesn’t bring anything new to the table, but it is extremely enjoyable. While having Japanese-only VO could cause you to miss dialogue in heavy action sequences, you might be having too much fun flying around shooting things to even notice.