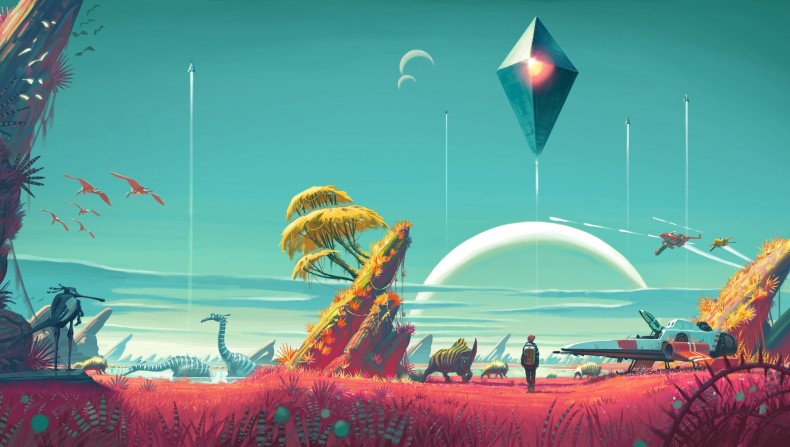 I have a whole universe in front of me and a million different opportunities at my fingertips; billions upon billions of planets await and I am unequivocally free to visit any one of them, do anything I want, and be whoever I choose to be. This is the promise of No Man’s Sky, and for the most part it’s completely true. The main problem, though, is that for a game filled with such a vast uniqueness and unbound choice, there are severe limitations which don’t become clear until later on. It’s a game that’ll divide opinion and probably lose appeal for many, but there’s no denying it will captivate imaginations and fulfill a lot of childhood fantasies, even if it’s not in the way we may have been led to believe.

At its core, it’s a first-person survival game. You start on one of 18 quintillion planets with a damaged spaceship and little else. After a basic tutorial, you’ll start to mine for elements needed to get your ship off the ground. It’s a daunting introduction, but it fills you in on the fundamentals of the game: collect resources to power equipment, sell and trade for units (the game’s currency), and help you travel to the far reaches of the universe.

Everything you own is made up of various elements that you can mine from different planets and meteors, or purchase from the Galactic Trade Network. Thamium9, carbon, and iron are among the more common resources and they’ll power everything from your ship’s thrusters to your exosuit shields. There are many other elements you can find which can be sold for a lot of units or used to craft upgrades to your ship, exosuit, and multi-tool. You don’t have endless storage for these and you’re constantly transferring them between your suit’s storage and your ship. It’s frustrating (to say the least), especially when you’re trying to get out of a storm and you need plutonium to fly your ship to the next planet. You can find additional slots for your suit and you can buy a new spaceship with more room, but there are so many different resources to collect that it never feels like you have enough space.

Blueprints can be found from specific facilities and space stations and they’ll give you opportunities to indulge in the intricacies of how in-depth crafting can be. One such item is the hyperdrive and it’s vital for travel between the billions of systems, you’ll need to buy a dynamic resonator, combine it with thamium9, and then craft the antimatter to build the warp cell needed to power the hyperdrive.

The story in No Man’s Sky is flat and barely present, with very little to make you care at all. For those of you wanting something more, well, go play something else, because much in the same way Destiny provided a vanilla plot to accompany the solid gameplay, No Man’s Sky uses the story tenuously to shift the focus on exploration and survival. When you are presented with sections of the game with some narrative, it falls on deaf ears because of how pointless it seems. Various aliens you meet do little to add to the story, and their static posture makes it feel like you’re talking to a statue; they don’t get up, walk around or interact with anything. You start off unable to communicate with them, but through finding knowledge stones and data throughout the cosmos, you’ll slowly start to learn their languages. It’s a nice idea, but one that doesn’t really change over time.

The most appealing aspect is visiting the various planets and encountering all of the different flora and fauna. You can scan and name these discoveries, upload them online and into the Atlas (the in-game information database). There are some amazing creatures out there and you can even interact with some. One of the first creatures I met was a mix between a bear and a stegosaurus, and I fed the little guy. He wouldn’t leave me alone and it felt like we’d bonded. Obviously, some of the wildlife you encounter will try and attack, but it means you never know how they’ll react to you. There are surprises around every corner and it can happen in the most random of places.

No Man’s Sky uses algorithms made up of many mathematical equations to build everything you see, meaning every new thing you find will be different to the last. I’ve visited baron planets with toxic rain and barely any life, vibrant plains full of beautifully green fauna and deep radioactive lakes, snowy worlds filled with mountains of gold and underground caves, and there are different ecosystems and day/night cycles which affect your time on them, meaning the temperature can dip drastically when the sun sets or a vicious storm can kick up all the poisonous space dust,so you’ll have to get in your ship and ride it out or else you’ll be dead before you know it. Not only are you trying to survive against the harsh environments, but sentinels act as the universe’s police force – patrolling the systems in search of troublemakers. If you try and break into a building they’ll hunt you down, and even if you’re doing little to piss them off, sometimes they’ll just come after you for no reason, which can be a real pain in the arse. At one point I was minding my business scanning for lifeforms and they started shooting at me – three of them. I managed to escape, but it meant I couldn’t explore in peace. I’ve also been shot at by space pirates whilst flying through space and they can be equally as violent and deadly. When you’ve got the confidence to fight back, these dogfights are great fun and shooting one of them down is a gratifying achievement. That said, if you get killed in space, you’ll have to make a corpse run back to your place of death, and if you die before recollecting your cargo, it’s gone for good.

The trouble is, many will hit a wall very early on. The story is ambiguous and struggles to hold your attention and without it I’m not sure the repetition of space travel will hold you forever. You see, a lot of the areas look almost identical, and many different tasks end in the same way as well. The space stations all look the same from the inside, as do the manufacturing facilities and the various alien encounters feel bland and repetitive. No Man’s Sky wants you to create your own journey by exploring the vastness of the universe, but it doesn’t help to keep your journey from feeling somewhat shallow.

Don’t get me wrong, in many ways No Man’s Sky blew me away. I love exploring the beauty of space and all of the different systems, but I feel the actual core gameplay loops wear thin. It might be within three hours, or ten, or more, but most people will drop off eventually. Multiplayer would give this game a whole new layer of enjoyment, allowing you to meet up with another player and even communicate for a short while would be cool; even if it took 20 hours for me to visit one of my friends I’d do it because I could – because the choice to do so was there. No Man’s Sky is a game with phenomenal foundations, but I feel there is too much familiarity and repetition at this point in time. Hopefully as time moves forward, Hello will include new features to keep things feeling fresh and less like an early access version of a promising game.

Read our re-review of No Man’s Sky in 2018.
Liked it? Take a second to support GodisaGeek.com on Patreon!

A great exploration game, but beyond the wow factor of infinite travel and discovering unique creatures and planets, there is little else to really do.