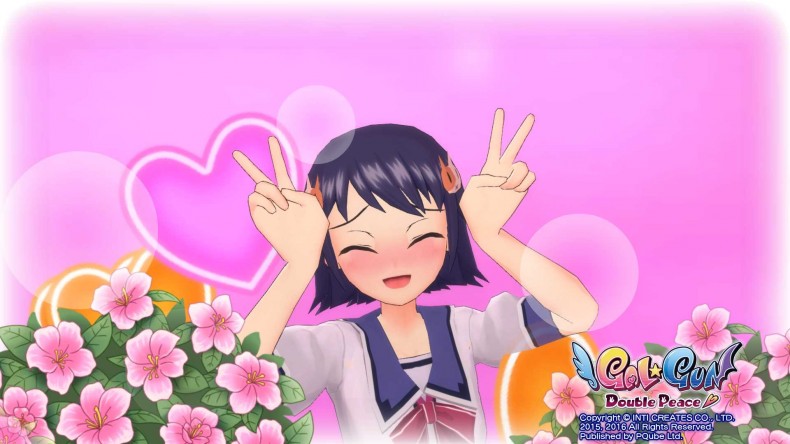 As a fan of Japanese games, I often visit import game websites and check out new game releases in Japan. Gal*Gun: Double Peace by Inti Creates is something I always assumed I’d be importing. The sheer premise sounds too much for any publisher to consider localising. But in steps PQube to localise the bizarre game, and having finally played the English version, I’m both happy and sad. It isn’t often we get such Bishōjo games localised let alone an on-rails shooter one.

You play as Houdai, a male student (of course) in an academy. You are struck by cupid with an arrow that is 32 times more potent and this makes every girl in the academy want you as bad as I want Persona 5. Girls run toward you from every direction. There’s also a demon angel to complement the cupid angel and this demon angel infects students to want you in a violent physical manner that implies S&M. The dialogue localisation around these interactions is great. Both Inti Creates and PQube have balls of steel for getting this released in the West and I respect them for it a lot – especially for releasing it without any changes. Unfortunately the gameplay is where things go south. Gal*Gun is an on-rails shooter with an anime high school girl skin. Multiple endings and story branches add to the novelty and replay value but in the end I wasn’t hooked to the gameplay like I was with Senran Kagura: Estival Versus. You have a weapon that shoots pheromones giving girls euphoria. There’s visual and audio feedback for this which makes it truly something playing Gal*Gun on a big screen TV. Aiming isn’t great, which is annoying because you need to focus on a particular part of the girl’s body to shoot them into euphoria for a bonus. You can use R1 to focus or see through obstacles for hidden items or even see the girl’s bust size if you want. There’s also Doki Doki Mode with more risqué camera angles and more. The Vita version of Gal*Gun even lets you use the touch screen to interact which is more immersive than the PS4 version’s touchpad for swiping. God, I feel dirty even saying that.

One of the funniest features is the “Mama Kita Gamen” mode which loosely translates to “mom walked in” where you can hide Gal*Gun and the screen displays an NES style RPG with 8 bit sprites and music. This is a brilliant idea and it is executed so well. I’m not sure people who walk in after hearing girls in euphoria will believe you’re playing an old school RPG, though. Animations are smooth but it is evident things were designed to accommodate a handheld version as well with the bland backgrounds. Performance is great as well on PS4 with barely any loading. I do wish the school environment was more detailed though. In the voice acting side of things, there’s only Japanese voices as an option and there are some scenes without subtitles which is annoying. I know it is more work to implement subtitles for scenes in Japanese games that don’t originally have them, but if you aren’t even doing an English voice over track, I would hope every bit of voice is subtitled.

Double Peace is a self-aware fun experience that does have flaws. The gameplay is repetitive and while the branching paths and some novel features keep things fresh, you will be bored quickly with the on rails shooting aspect. The privacy or “mom walked in” mode is a feature I can’t get over. If you’re open to trying out new concepts and want a bit of anime fun, go for it. There’s even a collector’s edition that has a pair of panties as a screen cleaner. Jesus Christ.

A unique experience that gets tedious very quickly but also one that should be experienced by anyone craving some mindless (but perverse) fun.

Gal*Gun: Double Peace is out now