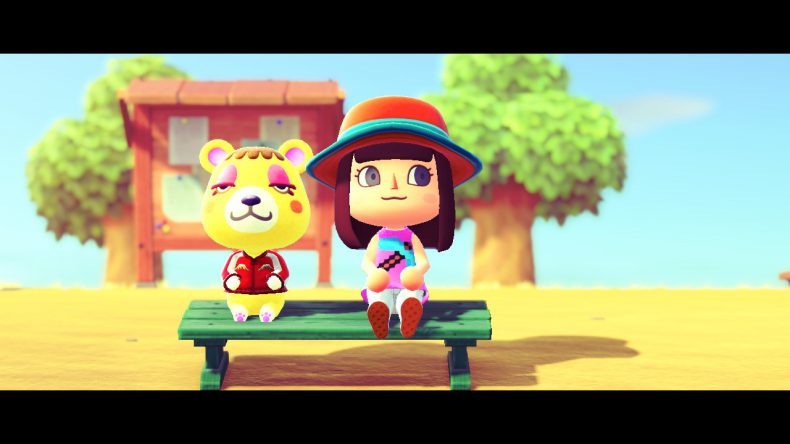 It shames me to say that after spending the past ten days falling in love with Animal Crossing: New Horizons, I have never played an Animal Crossing game before. It has taken a global crisis for me to finally take the plunge and dive headlong into the charming life sim, and oh, what a tonic it has been!

In these days of social isolation it has been a pleasant distraction to load into my island, potter about for a bit planting and watering some flowers and chatting with my island dweller friends. I moved into Beagleton with two fellow pioneers; Bill an over-active red duck who calls me “Quacko” and talks about his “gainz” all the time and a yellow …bitc… err…I mean bear called Tammy who ends every sentence with “Ya Heard”.

Things started well, I helped her and Bill choose the location of their houses. For Bill I chose a location nearer to the beach so he could use the open space to work out. Tammy seemed a little less confident, so I set her up nearer to Resident Services and not too far away from the location I chose for myself.

The first few days were bliss as together we explored our new island home. I was a bit disgruntled at first to find that Nook was overly reliant on me to get things done in Beagleton, but gradually I have taken on this new role of responsibility with the grace that has been bestowed upon me. I forget which day it was, but early on Nook pulled me aside and asked me to hand any species of fish or insect over to him as he had an old friend interested in the animal life on the island. I, of course, complied, I too was fascinated about our new home and wanted to learn more. Soon I had brought so many specimens to him, Nook told me that his friend was going to set up permanently on the island, and could I choose where he should set up. What an honour!

It was at this point that the cracks in my new found relationship with Tammy began to show. Tammy on the outskirts

As I delivered more and more creatures and fossils to Blathers it became apparent that we would need a more permanent building, a museum to catalogue all that Beagleton had to offer. Nook called upon me again, and we set to work on construction. Bill was excited, the museum was proof that life on Beagleton was viable, Tammy on the other hand became withdrawn and sullen.

I tried talking to her with limited success. She’s a late riser so I have to wait until the afternoon before she will let me in. When she eventually does she seemed more sullen and sleepy than usual. I gave her a gift, a white tulip I had picked the night before on a faraway island I had visited. She thanked me, but there was something in her demeanour that made me think she didn’t like it. Later that evening I spotted her near Resident Services, and I made my way over to speak to her. She brushed me off! Accused me of crowding her, suggesting I was “giving her a complex”. I was shell-shocked. The next morning I received a gift in my mailbox, something from Tammy. Excitedly I opened the package, maybe she felt bad at how abrupt she had been with me the night before and had sent me a gift to apologise? Inside was an item of clothing with a note that she had seen it and thought of me. I went to my wardrobe to equip the item, and…it was a pair of ripped pants. Tammy had sent me a pair of tatty trews! THE CHEEK! I have, of course, responded in the most British of ways by becoming an increasingly passive-aggressive neighbour. I dug up the flowers I had planted for her and have replaced them with some old tyres I fished up and an oil drum I found. I’ve also tattled on her to Isabelle in Resident Services, asking her to speak to her as I don’t like the way she talks to me. As I write this piece I am currently planning a complicated line of fencing so I can commit to the whole thing and have a proper boundary dispute.

Likes to shoot stuff and wear pretty shoes. Is a BEAST at Titanfall.
MORE LIKE THIS
Animal Crossing SwitchAnimal Crossing: New Horizons

Podcast #314: The confessions of Chrissy W