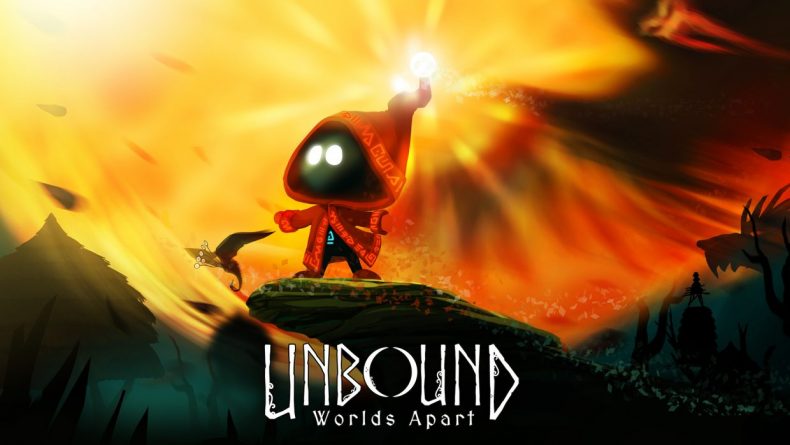 Brand-new ideas are hard to come by these days, particularly in the 2D platforming genre. Plenty of solid mechanics have come and gone during the past few decades that have stood the test of time. But, there can still be excellent titles which, despite not being truly innovative, instead provide an excellent overall experience. Dead Cells has its sublime controls, the likes of the Ori or Hollow Knight have the complete audio and visual package. Unbound: Worlds Apart doesn’t have anything truly revolutionary up its sleeve either, but its Prologue certainly hints at a game with plenty of variety and ambition.

You play as Soli – a cross between Final Fantasy IX’s Vivi and the wizards from Magicka 2 – as he accidentally stumbles into a cataclysmic event that threatens his home and everyone he knows. Before long he acquires a unique ability to open up a portal to a strange world in his vicinity. But rather than directly travelling to different worlds, the portal acts as a circular distortion of reality. In its initial guise it simply opens up a portion of a parallel universe, which you manipulate to progress. This alternate reality might have platforms that don’t exist in Soli’s world, so creating a portal at the right location could reveal a new route through a previously insurmountable obstacle However, even by 2D platforming standards, this is hardly a new idea, and if this was all Unbound: Worlds Apart had to offer, it would feel very stale, very quickly. Thankfully, the Prologue also offers up glimpses of the raft of ideas that developer Alien Pixel Studios has for the full game. In the half an hour-long Prologue we’re also introduced to two other uses for the portal which impact gameplay in different ways. The first sees you reversing gravity each time a portal is created, again allowing for more varied traversal. Again, not a unique idea, but one that is set up reasonably well, requiring good use of momentum and even a tease of puzzle solving as well. Most gamers used to platformers won’t struggle too much but again in nods to the ideas at play and what could be embraced in the full game.

The last use of the portal follows a similar premise to the first use but also reverts to a light and shade mechanic. Using the portal creates a circle of light, revealing enemies and other dangers, as well as those crucial hidden platforms. However, in a new twist here, a lot of movement seems to reduce the size of the portal – and therefore your field of vision – and so steady movement is key. It’s the most intriguing of the ideas but does also seem a little inconsistent with what constitutes a reduction in the portal size and what doesn’t. And with no tutorials anywhere to be found on new portal mechanics, it is down to a bit of trial and error. So with three portal mechanics, and a chunk of platforming thrown in as well, those thirty minutes of the Unbound: Worlds Apart prologue feel fairly packed. There’s clearly a desire to showcase the raft of ideas we can expect in the main game. Whilst I’m certainly not expecting new ideas every ten minutes in the full release, it’ll be quite exciting to see how many different portal uses are worked in when it launches in May.

On release, it will come down to how well those ideas are executed and woven together. So far, they certainly feel varied enough, however where their new ideas aren’t completely intuitive – like the light and shade mechanic – a lack of guidance could frustrate players. The platforming, for the most part, feels solid, if a little rudimentary. Hopefully, the full game will offer more variety than just jumping on platforms and clinging to vine-laded walls. It looks good too; clean, polished and well-presented. If there’s plenty of variety of locales or environments that make up the full experience, then this could be a nice looking world to explore. All in all then, Unbound: Worlds Apart’s prologue is definitely worth a try and does an effective job of outlining its niche and ambition. It’s unlikely to blow you away with what it offers, but it’s an enjoyable little romp with enough glimpses of potential. It certainly piqued my curiosity for what the main game could hold when it launches in a few weeks’ time.