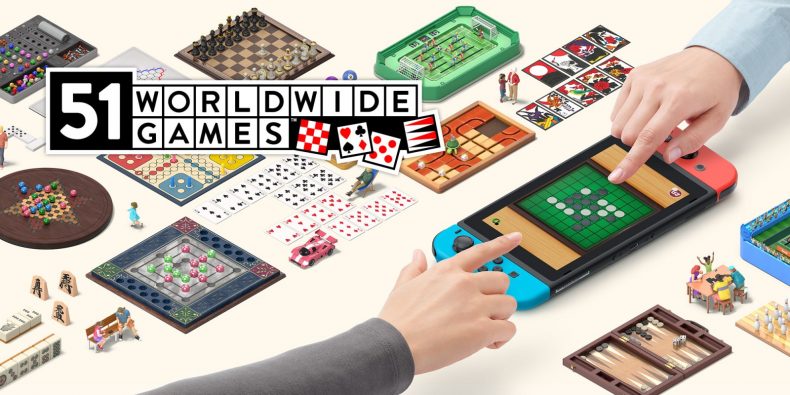 Game compendiums have been around for years, and often there’s very little else to say about them. Collections of well-known games are just that, with little extravagance to speak of. However, Nintendo is trying to add a few flourishes into proceedings with 51 Worldwide Games. On the surface it seems like just another assortment of familiar pastimes, but dig a little deeper and there’s a mix of education, entertainment and even a smattering of innovation too.

With over fifty games to choose from, the familiar staples all make an appearance. From card games to board games, from strategy games to more logical types, there’s a mix of everything you would expect. Old favourites like Chess and Chequers are here as well as Four-In-A-Row and even Poker for you to enjoy.

So far, so, well, as expected really. Bolstering the game roster though is a slew of additional action games meaning alongside Ludo you can also enjoy boxing, air hockey, and even Nintendo’s version of Scalextric. These action games are often the trump card though, being a much faster pace than more traditional titles. It creates a nice juxtaposition to the often ponderous speed of some games. And these are significantly more exciting when playing in local multiplayer, so you can see the look on your opponent’s face when you emerge victorious. Multiplayer then, is where the focus is, either through online or local play. With local multiplayer, you can have the perhaps more traditional option of using controllers and JoyCons from a single Switch. However if you have multiple Switches in your household, you can enjoy even more games and options. For example certain card games require you to conceal your hand, and so are only possible with numerous screens.

Having more than one Switch also enables Mosaic Mode which sees you use the Switches as the game board, and placing them in different arrangements yields different results. For example you can use it to create longer and more winding racing tracks to race over Scalextric-style. It’s a nice touch, even if it does require a lot of prior hardware investment to execute to its full potential. Thankfully you only need a single copy of 51 Worldwide Games to play, rather than everyone needing their own software copy as well.

But there’s plenty here for a single-player experience too. Lots of the games can be played against the AI, with different difficulty settings and the game keeping track of your best scores. So there’s enough to keep you coming back for more. As an additional touch, Nintendo has doubled-down on the “Worldwide” part of the title, to emphasise more of the historical and geographical facts about its collection of titles. After each game has finished, you’ll be treated to a new factoid related to it, building up your knowledge. It won’t win you Mastermind, or indeed any friends at parties, but it’s a quaint addition to a genre often lacking in new ideas and content. For those new to any of the experiences on offer, there’s a handy “How To Play” video for each one, covering the basic controls and premise of each game. Be warned though, often the interactions between two characters discussing the chosen game can be cute and cringeworthy at best to eye-rollingly irritating at times. It’s the Nintendo way of trying to be jolly and inclusive, but often you’ll just want a simple list of instructions rather than an exaggerated conversational exchange that can last longer than the game itself.

51 Worldwide Games is shaping up to be a decent party title, with something for everyone. Whether you’re looking for a solitary test of your skill against some AI, wanting to visit some old favourites with a friend, or even if you’re after something a bit faster-paced, you’ll find it here. Revolutionary this most certainly isn’t, but there are enough ideas here to make this feel a bit different from what you might have been expecting.

Note: In North America this title is known as Clubhouse Games: 51 Worldwide Classics.