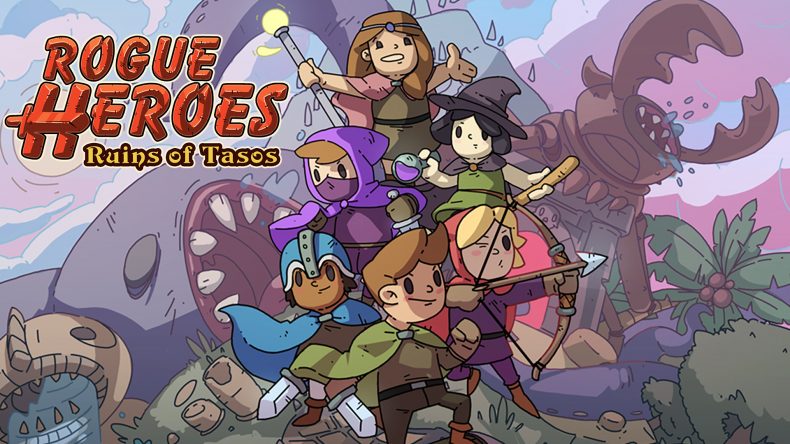 If you’ve ever played unmistakable classic The Legend of Zelda and thought, what this really needs is a class system and co-op, Rogue Heroes was developed entirely for you.

The gameplay is 90% The Legend of Zelda and 10% a bunch of added stuff. I’d call it Zelda Plus if I didn’t think the internet would come for me. Though, in fairness, I’m not saying it’s better than such a hallowed classic, only that, on the surface at least, there’s more in it.

For a start, the aforementioned class system. It’s a fairly basic element, determining things like starting HP and which special move you have (knights can bash things, for example), but it’s still a nice addition and one that alters your character’s appearance and gear which is important to some people. I didn’t notice a major difference when playing though. The dungeons are procedurally generated and so it’s different each time you play, and there’s an element of pot luck that decides which dungeon types you get. Veterans of the 8-bit era will likely feel somewhat nostalgic from the get-go with the overall aesthetic and the colourful, pixel-art world. How your hero moves, pushes blocks, carves through shrubbery and pots for hearts and jewels; all of these feel immediately familiar. Even the music is decidedly similar. But, perhaps because the influences are worn so proudly, it doesn’t feel particularly cheeky.

A collection of tools and secondary weapons help you defeat enemies and solve puzzles as you progress. You’ve a bow and arrow, a grappling hook, and bombs among other things, which you can cycle through and use alongside your main weapon. Activating switches, pulling on chains and lighting torches reveal secret chests, keys and hidden doors, allowing you to progress through each dungeon one room at a time, working your way through to the boss and the treasure it guards. In between these trips to the dark you’ll spend time in the village of Intori, a quaint little settlement that you’ll rebuild and upgrade along the way. Here, villagers will give you quests and objectives to complete out in the wild or in the various dungeons into which you’ll delve. Running with friends in co-op is great fun, though it really doesn’t alter the game all that much. Strangely, it feels just as natural alone as it does in a group.

Having played the demo on PC, I can say I’m more excited for the Switch version. It’s not graphically intensive and so running it won’t be a problem, but the roguelike nature and procedural dungeons already seem like the perfect fit for a handheld console.

Senior Content Editor Mick has been playing games for over 30 years and writing about them for around 12. After drifting from site to site for a while, settling briefly at the now-defunct Made2Game and freelancing for the gone-but-not-forgotten NintendoGamer Magazine, he came at last to rest at Godisageek. Mick has been a reviewer, staff writer and content editor here for some time, while also moonlighting a little for Red Bull Games. He has 4 kids, has written 2 novels, and sometimes even manages to pay a bill or two. You'll usually find him defending the galaxy in Destiny 2, battling evil in Diablo 3, or lurking in the background on Twitter. Find him there @Jedi_Beats_Tank, or on XBL (JediWaster247), PSN (Jedi_Waster) or Nintendo (JediWaster).
MORE LIKE THIS
Rogue Heroes: Ruins of TasosTeam 17