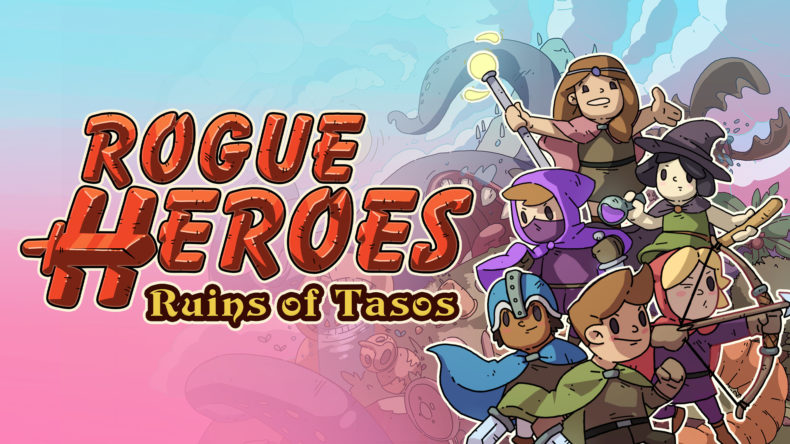 It shouldn’t surprise anyone to hear that I’m a huge Zelda fan. It’s hardly an original stance to take, but from Ocarina of Time to Skyward Sword I’ve spent most my life delighting in Triforce pieces and Hookshots. One of the few games in the series I missed out on is Four Swords Adventures. The co-op offering seemed like a lot of fun, but the setup and friends required to enjoy it eluded me in my teens. Fortunately Heliocentric Games and Team17 are bringing the Four Swords spirit back, with Rogue Heroes: Ruins of Tasos.

In true Zelda style (via a familiar looking cutscene of stained glass windows and text) the world of Tasos is struggling with hordes of evil monsters commanded by the Titans. In ancient times four goddesses sacrificed themselves to seal away these powerful demons, but this is no longer enough to keep their power at bay. As you might expect, it’s up to you and your friends to go from dungeon to dungeon and beat up some bosses in order to seal this threat away.

Your character wakes up in the village of Intori, and is immediately guided towards the first of the baddie-filled dungeons. With only a sword and shield to your name you’ll need to carve your way past slimes, cows and bushes and navigate the overworld to the first objective. Combat from a top down perspective is simple, and once you get some upgrades can be pretty fun. 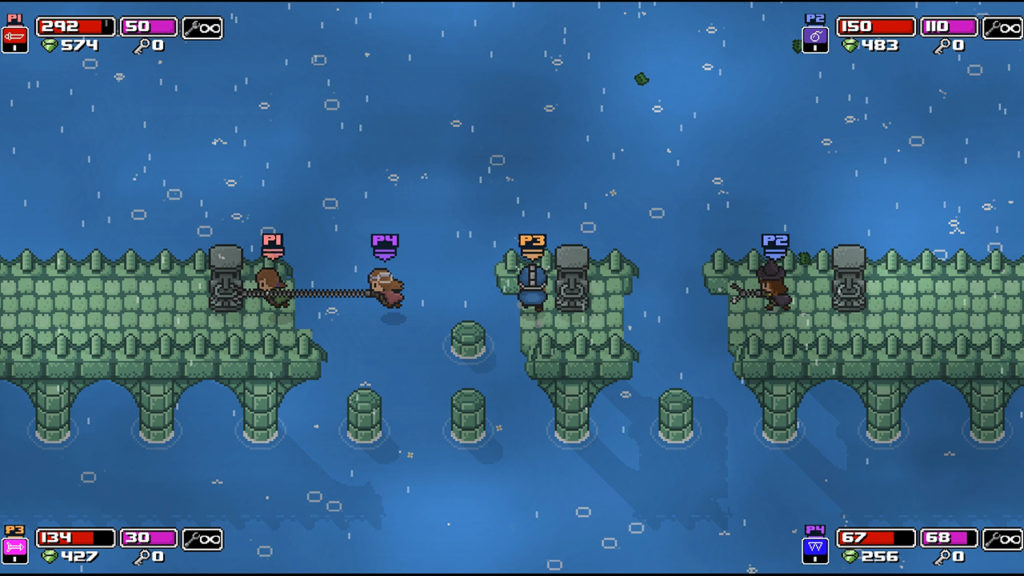 As you explore the land of Rogue Heroes, you’ll find all sorts of side quests and collectables tucked into the corners of its overworld. Finding equipment for the village farm or a missing lover will usually provide you with a significant buff in power going forward, and even the fetch quests are pretty entertaining. This is helped by how easy it is to move from one end of the map to the other thanks to plentiful fast travel statues.

Whereas the overworld is the same no matter what, each time you enter a dungeon it’s totally different. Each room is host to a selection of enemies and puzzles, that are instantly recognisable to fans of Link’s adventures. You’ll be pushing blocks onto switches, lighting lanterns and clearing rooms in the quest for keys and gems.

When you die in a dungeon (which will happen a lot) you’ll wake back up in Intori with all the gems you collected. This precious currency can be used to upgrade the village to add new shops, and spent in these shops to power up your character. This satisfying loop feels just as good now as it did in Rogue Legacy. It never feels like you’re being set back when you fail, because you’ll just be straight back into the action with extra HP, attack power or even a new character class. 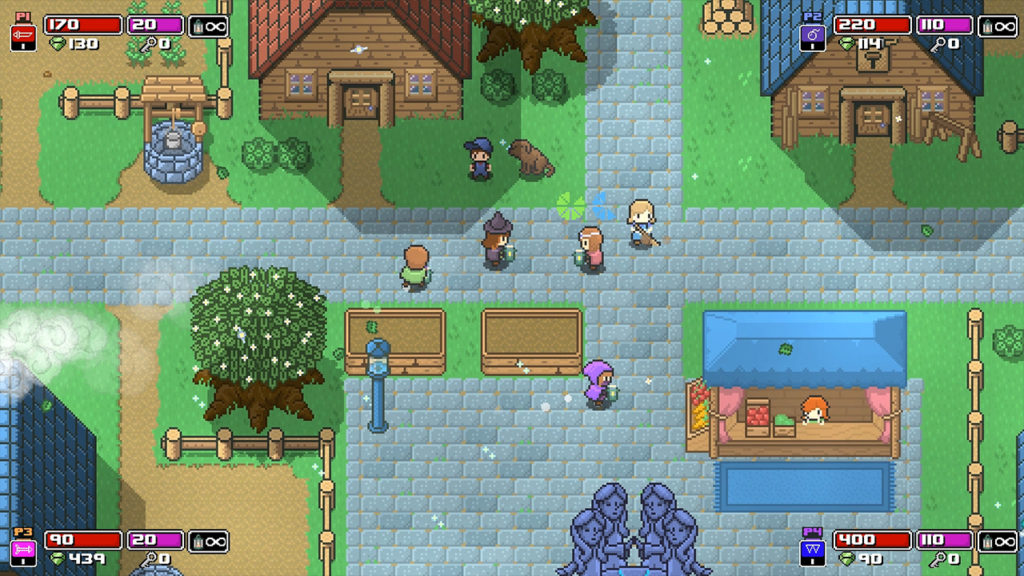 Each player can change their outfit at home at any time to change class. Classes have different base stats, as well as a special ability to help you survive for longer. I personally liked the dodge based abilities, and found blinking out of the way of damage as a Mage or using the Ranger’s dash to run away most effective.

Perhaps the way Rogue Heroes: Ruins of Tasos is the most similar to Zelda is the selection of items you find on your adventure. From simple items like a bow and bombs, to a hammer that flattens pillars and a genuine hookshot, it’s pretty shameless to see these tools lifted straight from Nintendo’s classic series.

The inclusion of co-op really elavates Rogue Heroes. Local co-op can be played with individual Joycons on Switch, and there’s also the option to play online with friends or randoms too. You start fresh can use your single player save file to bring your powered up character with you, and any upgrading you do will follow you back offline. 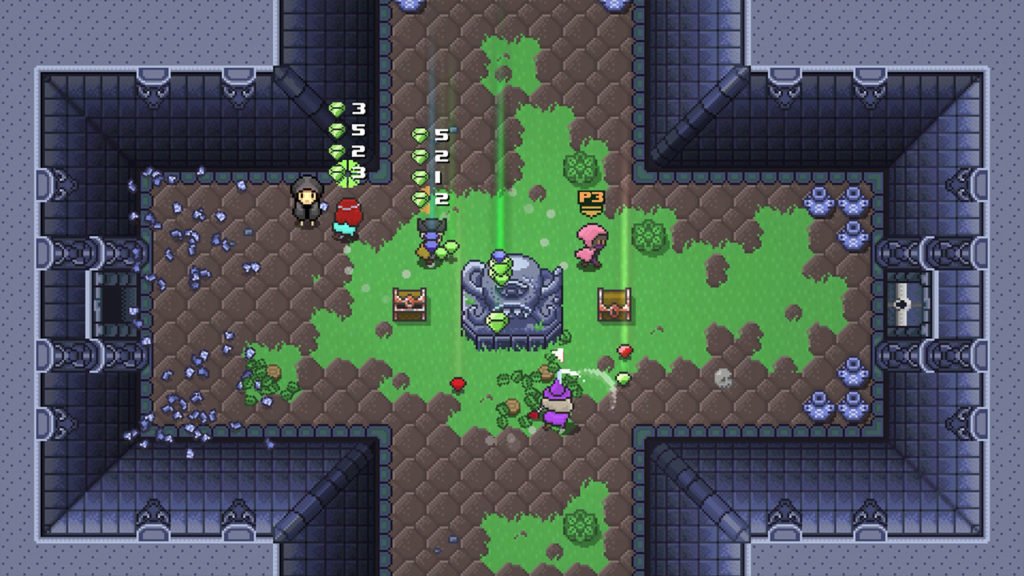 As fun as it is to play with friends, there are a lot of issues that hold Rogue Heroes back from being great. The speed you move at means controlling your character never feels particularly precise, and there were multiple times I’d push a block too fast and ruin a puzzle. Sword combat never feels particularly fair either, thanks to the pitiful range of your weapon. I saved up gems to upgrade the reach of my trusty weapon as soon as possible too, and could barely tell it’d changed.

Above everything else though, it’s the traps in the dungeons that really spoil the game. Rooms are often littered with tiles that look slightly different, and stepping on one can triggers arrows or bombs to rain down on you for massive damage. If you don’t pay attention these traps absolutely wreck you, and it just isn’t fun. The worst culprits are snakes that wait inside breakable jars. If you smash jars with your sword without taking 5 seconds to check if it tremors, you’ll be immediately attacked by the slithery little bastard inside. Eventually I just started throwing every jar to get some distance between potential snakes and myself, which got old fast.

Rogue Heroes: Ruins of Tasos is fun with friends, but has some seriously irritating issues you should be prepared for. It’s really satisfying to upgrade your character after failed attempts at a dungeon, but it’s hard to deny how much is lifted from the Zelda series. If you can cope with some annoying traps and the sword range though, there’s some enjoyment to be found in this top down throwback.

Rogue Heroes: Ruins of Tasos is fun with friends, but control issues, irritating traps and a lack of fresh ideas make it hard to recommend for solo players.