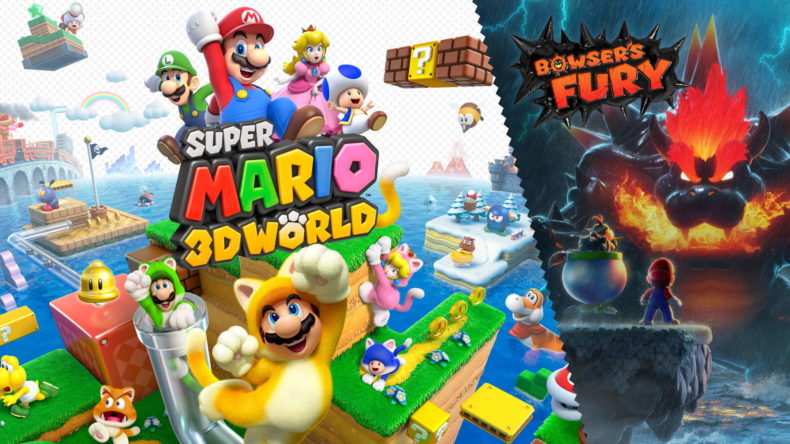 With the broad appeal of the Nintendo Switch, there’s a very real possibility that a discussion might happen as to whether Super Mario 3D World + Bowser’s Fury is actually on par, or better than Super Mario Odyssey. Look, I know that the business of games may not be the preferred topic of discussion when talking about something that’s otherwise so joyous, but there are only so many superlatives available to a critic and I want to space things out a bit, okay?

Ranking 3D Mario platformers aside, I truly envy anyone playing Super Mario 3D World for the first time. This is a game that has enough unique and new ideas in it for five or six games in any other series. Starting with the obvious star of the show: the Super Bell turns Mario into Cat Mario, and ushered in an entirely new way of platforming in the series, and I do think it paved the way for Cappy allowing Mario to almost fly across the worlds created by Nintendo for Odyssey.

Then there’s the Double Cherry (cloning the player multiple times over), Cannon Boxes, Light Blocks, Goomba Masks, and you can even pick up a Potted Piranha Plant that can eat enemies for you. On top of that, you’ve got the returning items like the Mega Mushroom, Propeller Box, and Boomerang Flower, and that proves how many ideas went into the 3DS title, Super Mario 3D Land, which I’d love to see revisited somehow, as well. 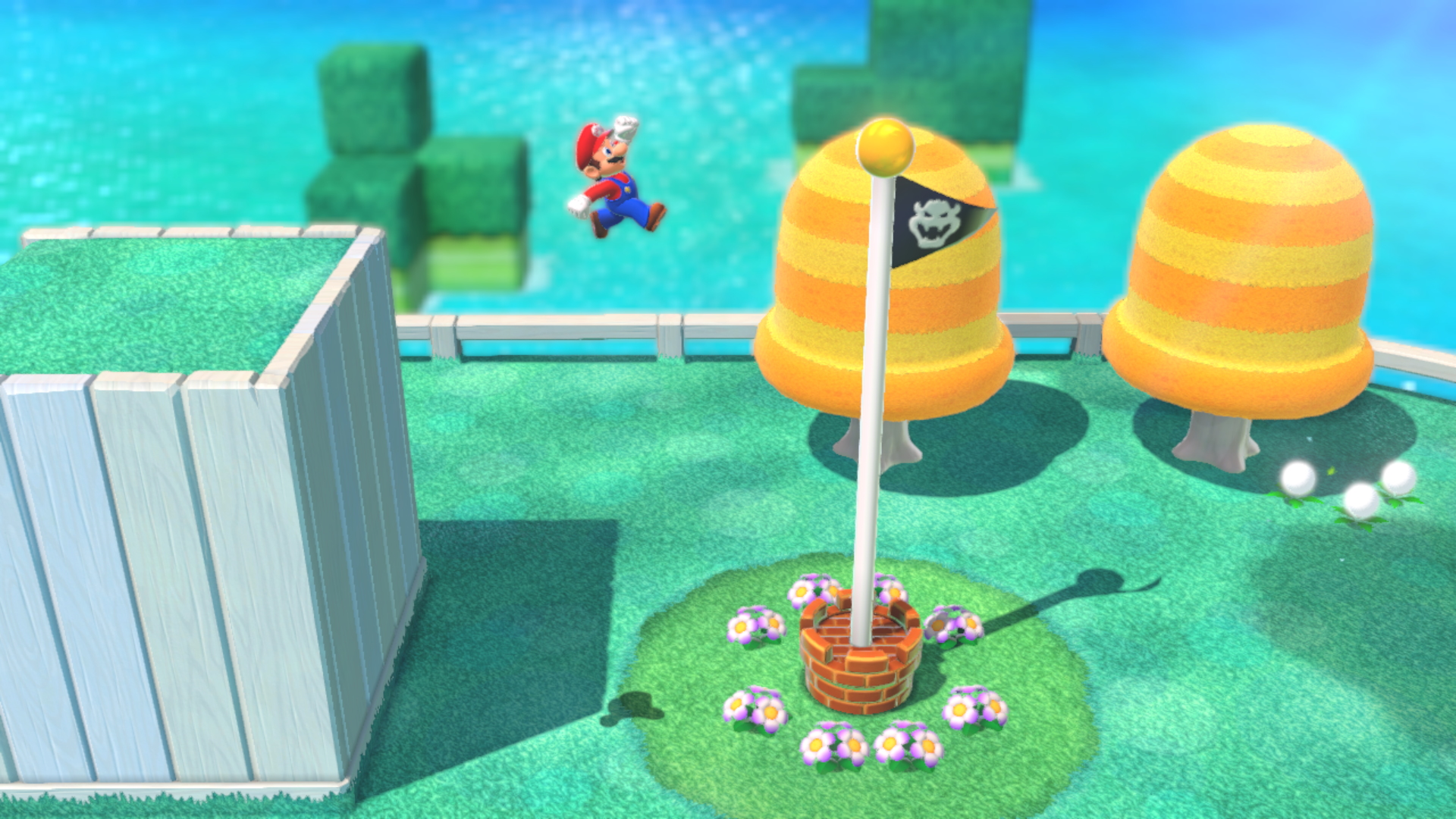 But Super Mario 3D World is pure happiness in gaming form. Even as someone who did everything available in the original Wii U release, levels would wow me over and over again as I played through this new version. Even in the first world there is such ingenuity that it’s hard not to just fall head over heels for the game. Despite being recognisable with its overworld map and distinct levels, there’s just so much here. Captain Toad makes an appearance with unique puzzle levels which spawned an entire game in Captain Toad: Treasure Tracker, and that’s what I mean about the amount of ideas on offer being enough for multiple games in any other series. It’s fit to burst with creativity, and honestly, it’s brilliant to see probably the best Wii U game being given a proper chance with the audience base of the Switch.

Where the main game here follows the tried and true progression from lush greenery through desert, ice, and everything in-between, the gameplay feels different. Yes, it’s still a platformer and no, you aren’t going to suddenly forget the language of a Mario game, but it feels instantly faster than almost every other title. The Super Mario Bros. 2 school of character selection is back in play: Mario is an all-rounder, Luigi jumps higher, Peach can float, and Toad is speedy Gonzales in Toad-form, but even Mario feels quicker and more responsive. Move-sets are slightly different, but there’s a feeling of control Super Mario 3D World offers that I sincerely appreciate.

The original Wii U title had touch controls for some smaller sections, and you can indeed use the Switch in handheld mode for these, but docked it’s a simple case of hitting the shoulder button and using the in-built motion controls. It’s elegant and works well, but the gimmickery of the Wii U was never over-used in this game anyway. It’s worth noting that the Cat Suit dive can still be cancelled in mid-air, and those that know what that means… well, they know what that means. 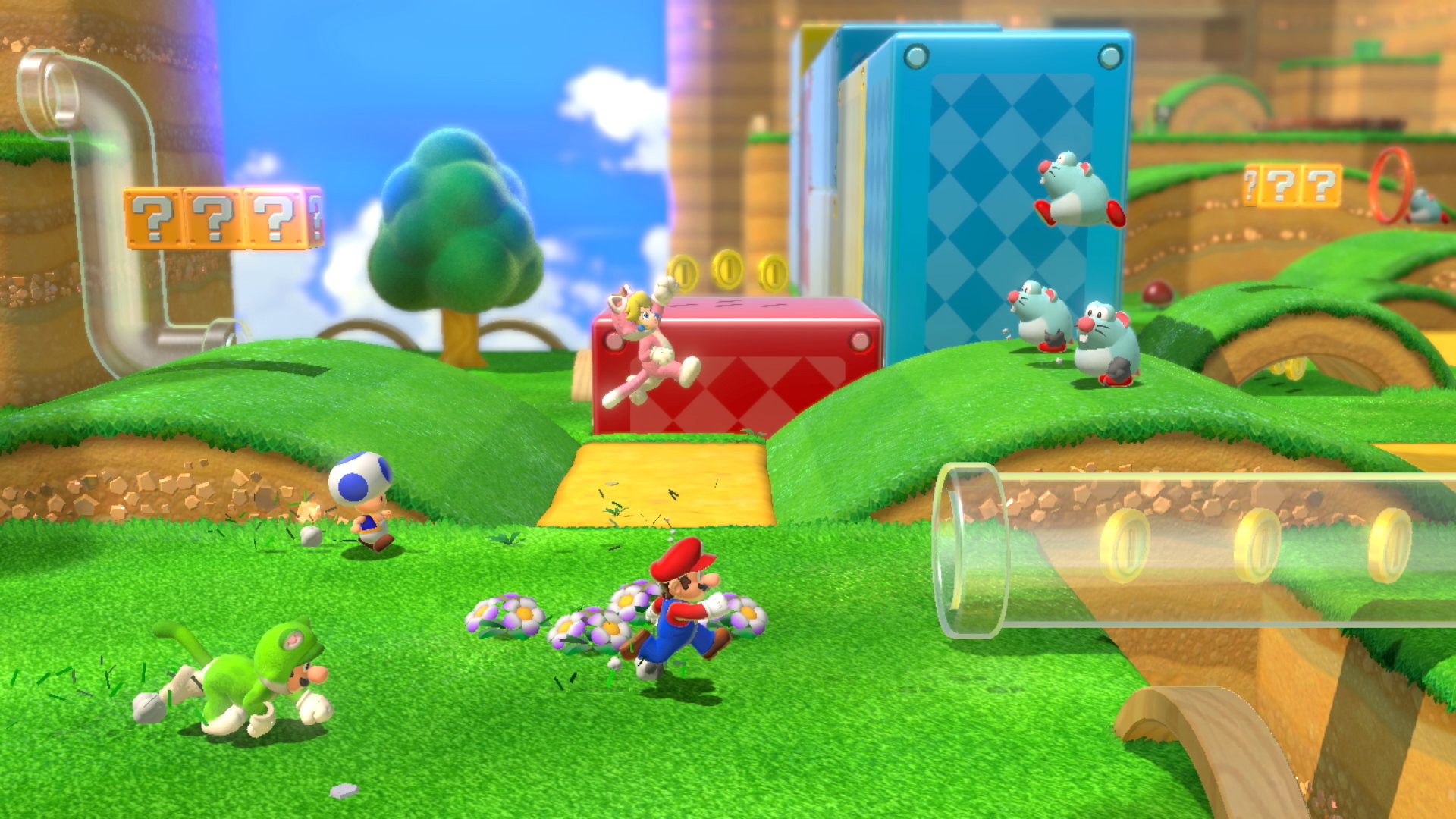 New to the Switch version is an online co-op mode for up for four players. Offline, co-op is exactly as much madness as it is in games like New Super Mario Bros U Deluxe, but the 3D plane offers a little more chance for calm. If someone gets too far ahead, the others will be bubbled and warped to the advanced player, and the online play doesn’t fix this. It’s smooth, don’t get me wrong, but it’s a shame it didn’t borrow the idea of Super Mario Maker 2’s co-op where you can even go off screen in a pipe and carry on playing separately from your partners. Honestly, it feels as though Nintendo knows some bizarre secret about multiplayer Mario games and isn’t telling us, because while it’s a good laugh with like minded people, it remains a bit of an annoyance after a while.

One of the bigger draws to this re-release is Bowser’s Fury, an entirely new mode that feels somewhere between Super Mario Odyssey and Super Mario Sunshine, only if they were both Super Mario 3D World in theme. Everything on Lake Lapcat is cat based. Everything: the trees, flowers, and even enemies have been altered to be cat-like. Lake Lapcat is a fairly large seamless open world in the form of an archipelago. Each island has five available Cat Shines on it, and Fury Bowser will appear on an unseen timer to mess up your plans and chase you around. You can eventually turn into Giga Cat Mario to fend him off, but I’ll say no more about that, or how the story progresses for fear of spoilers.

What I will say is that I was pleasantly surprised by how long Bowser’s Fury is. Each island begins pretty simply with basic Cat Shines to collect, but similar to Odyssey, the areas have unique Shines, and there are also plenty off the beaten path that aren’t part of the “levels”, for example, the loveable cross between a Plesiosaurus and Loch-Ness monster, Plessie is back and there’s plenty of mini-levels that require riding it to get Cat Shines to add to your total. 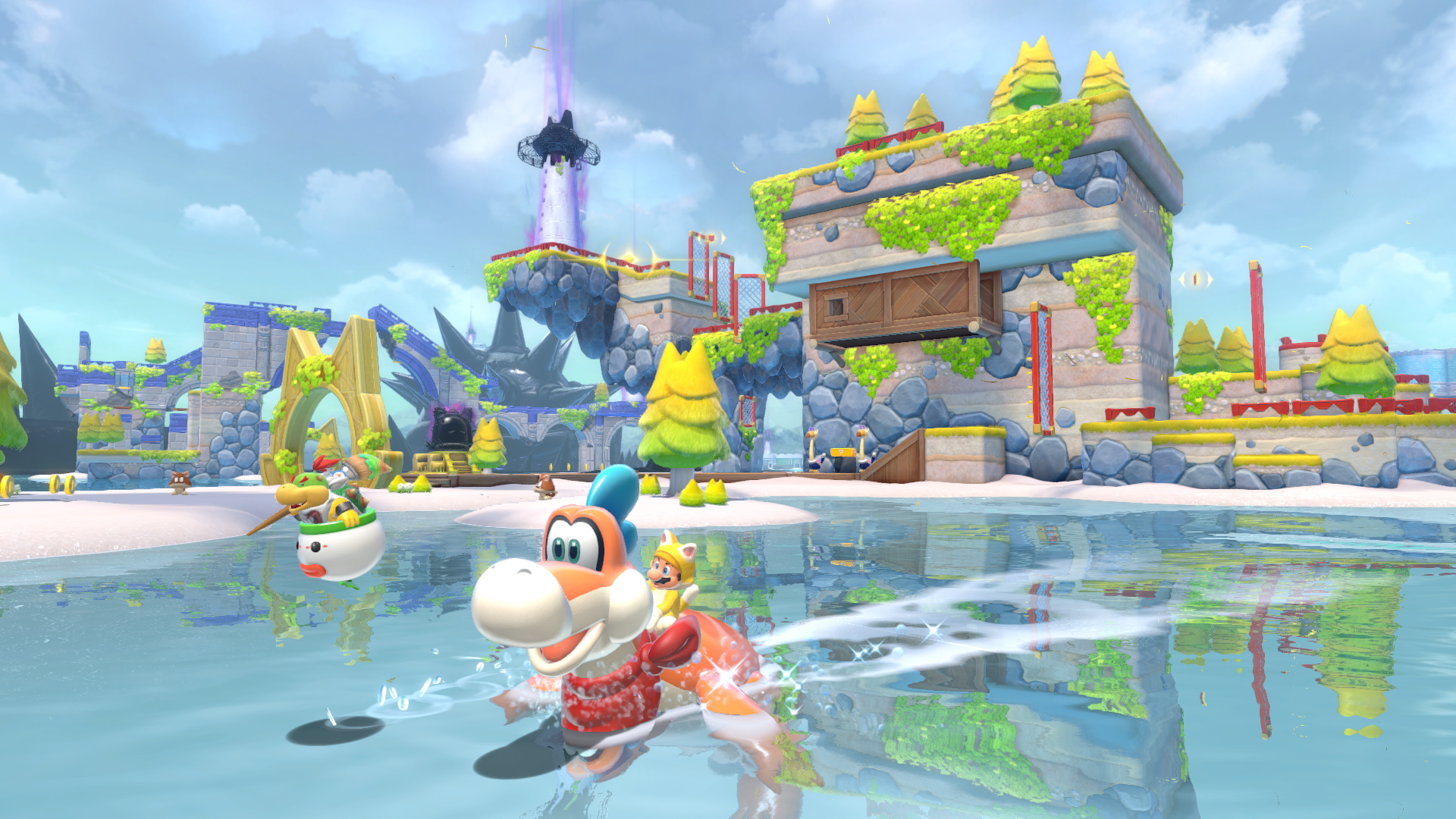 Bowser’s Fury isn’t particularly tough, and really the only difficulty comes from some of the later platforming sections, but again, we’re not talking even close to Darker Side of the Moon levels here. As for Bowser himself, at the start his appearance is exciting and new, the boss fight offering yet another new idea in a series that’s had too many boss fights to even count. Towards the close of the game, mind you, when you’re just purely hunting shines and have seen credits, his appearance is a mild irritation, and you’re best off letting him kill you so he disappears (his job done). The only punishment for death here is taking coins off you, eliminating the feeling of true peril once you understand the systems.

Power-ups can be held in Bowser’s Fury, which is an interesting take. Up to five of the five available power-ups are in your inventory and a press of the up-button on the D-Pad allows you to select them at will. I spent most of my time as Cat Mario, though the Tanooki suit’s ability to float helps later on. Bowser Jr is your AI buddy for this new game, and he can be set to be of different assistant levels, almost akin to a difficulty setting, or even controlled by a local co-op partner. This co-op mode almost breaks the game because as long as you keep Bowser Jr within a certain visual range, your pal can just send him off to grab things you’d otherwise have to platform towards.

Bowser’s Fury is incredibly strange, yet also gave me one of my favourite moments in a game in a long time. It feels like an experiment that’s successful enough that I killed the battery in my Switch twice hunting shines, and that I completed 100% of it such was the obsession it created in me. I didn’t expect it to be this good, or to offer as much content as it does. I wonder if it was originally supposed to be part of the Super Mario 3D All-Stars package because it feels fairly strange and is a completely separate option when you boot the game up. It’s entirely cat-based, so is a heavy dose of Super Mario 3D World, but ignoring the cats for a moment it really feels way more like a massive piece of Super Mario Odyssey DLC that never made it out the door. It’s superb, highly playable, polished, and honestly, really confusing given how rarely Nintendo do this much work on a re-release. 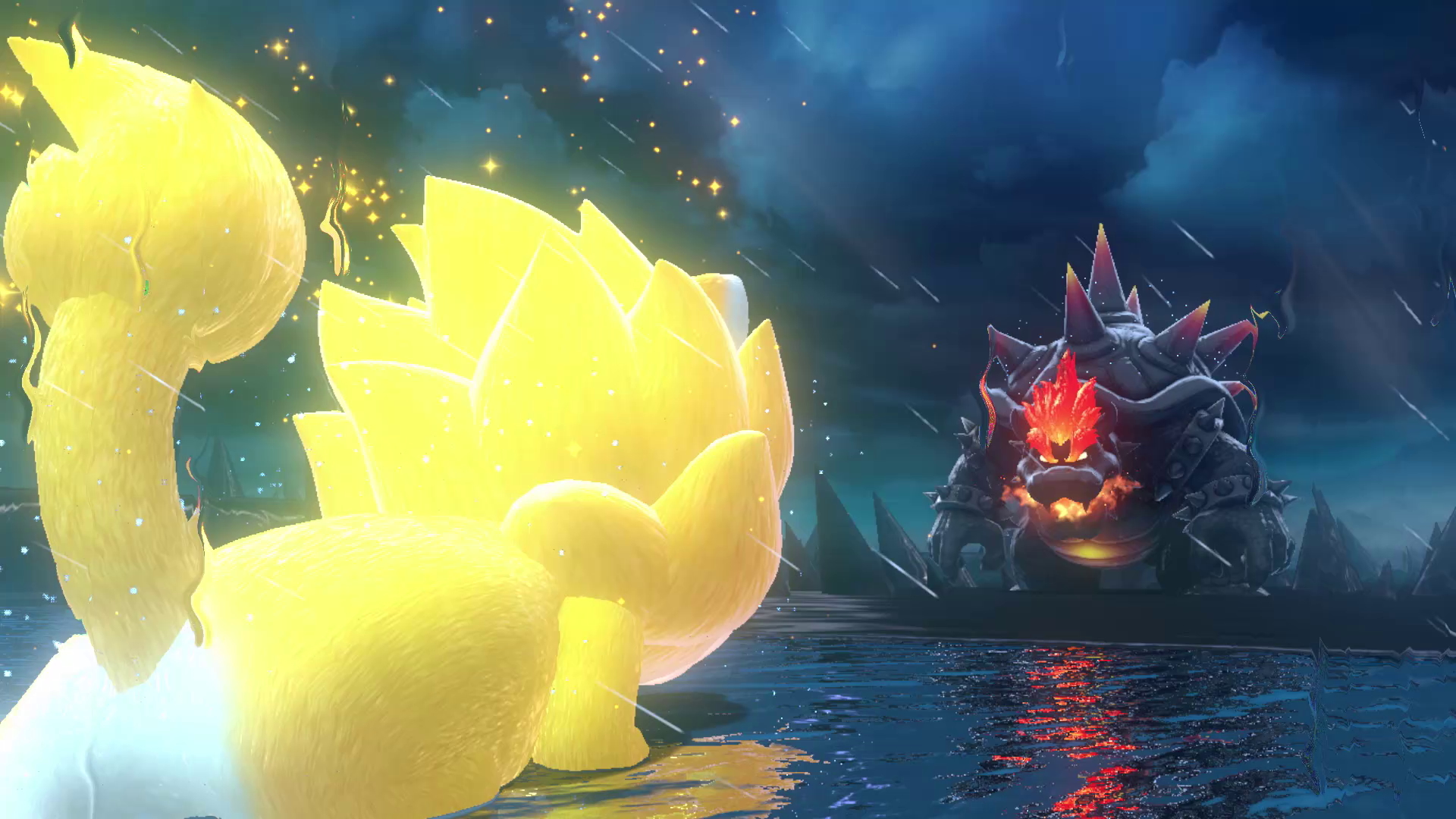 If you read my review of the original game for Wii U, you already know how I feel about Super Mario 3D World. But what I didn’t expect is how fresh this entire package feels again in 2021. As a package it’s only rivaled by Super Mario Odyssey itself, widely regarded as the best 3D Mario on offer, yet the sheer creativity within the actual level design makes 3D World stand out and stand alone. Yes, the archetypes of Mario level design are here, but the playing around with shadows, with hidden blocks, the sheer joy of it all, makes Super Mario 3D World an essential purchase for everyone.

It’s still one of the best games Nintendo has ever made, and it’s going to be fantastic seeing it finally get the adulation it deserves. Back in 2013 I said the Wii U game was “beautiful, colourful, amusing, and bereft of any cynicism whatsoever”, and if you don’t need that in your life, I don’t know what to tell you, because bar the multiplayer elements, this just might be one of those elusive truly perfect video games.

Despite multiplayer now being online, it still feels superfluous, but otherwise Super Mario 3D World + Bowser's Fury might just be one of those fabled "perfect" games.