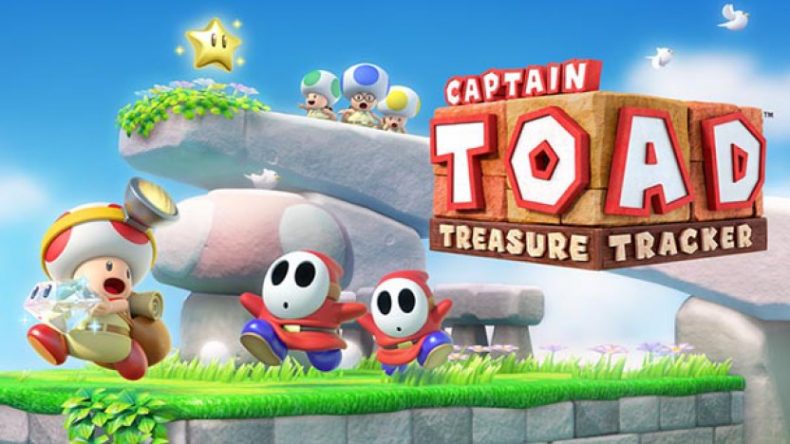 As Toad’s beautifully round face stares out of the screen at you it’s hard not to fall in love. He looks like he could actually be a real thing, kind of soft to the touch, a little pliable with the right amount of squishiness, his charm furthered by a cute little smile. The main character of Captain Toad: Treasure Tracker and the world he inhabits are just wholesome and lovely.

This is the magic of Nintendo’s design philosophy, everything within Captain Toad: TT feels wonderfully solid, like you could reach out and pick any element of it up, squish it, roll it around in your hand; like it’s tangible, real. This is a hallmark of pretty much all of Nintendo’s first party output, and can’t be said for offerings like those from SEGA (the Olympics), Bandai Namco (Sports Superstars) and Camelot. If anything, the only people outside of Nintendo that have managed to achieve anything like what Nintendo puts out is Ubisoft with Rabbids Kingdom Battle.

Anyway, back to Toad, you may remember this when it originally came out for Wii U and because of the console’s poor sales performance it didn’t do as well as it should have done as a result here we have the inevitable Switch port and perhaps more surprisingly a 3DS one as well. Functionally not much has changed, you’re still guiding Toad round isolated 3D enclosures, rotating the camera to find the path to get to the star, the kicker being that Toad cannot run, or jump. Because of the lack of omnidirectional movement you need to analyse the layout of the levels and work out how you can reach the goal safely while also achieving the other objectives laid out for you. And what levels these are, they can range from small isolated blocks to sprawling running tracks and they’re so absolutely jam packed with detail and things to find that there’ll be several moments when you’ll finish a level, find out the bonus objective and wonder aloud to yourself, “where the hell have they hidden that?” The thing is, even when you think they’ve exhausted everything they can do with the available space some levels reappear later in the game, remixed with slightly different elements to challenge how well you are able to navigate them.

Considering just how much is packed into a level it’s a little disappointing that a lot of the time things are just hidden from you because of the camera, yes it can be positioned in almost any way you want, but normally something you’re looking for will be tucked in a nook halfway up a hallway you can only see down if you angle the camera just right. Then there are single pass levels where you have to do the whole thing in a single attempt, in these you cannot double back to re-attempt to grab something you missed meaning that to try and get it you have to do the whole level again. These aren’t deal breakers, but they’re really frustrating in a game that is otherwise so tightly designed.

Regardless of what machine you play this on you’ll get pretty much the same experience. Aside from a lack of visual fidelity the 3DS version looks incredibly close to its bigger brother, a considerable achievement on hardware that is significantly underpowered in comparison. What Captain Toad achieves here is so immense you’ll wonder just how some 3DS games can look so ugly, this is bright and colourful and has that same feeling of tangibility that the Switch and Wii U versions have. If you play on the Switch in handheld mode, then control is obviously operated by the joycon controls with prods and taps on the unit’s touchscreen to move elements like sliding blocks or poke enemies to stun them. In TV mode however you have to put up with an unsightly pointer which is moved by tracking your controller and then you press the ZR trigger to initiate the tap, it’s not really intuitive. While Captain Toad isn’t exactly a taxing game, certain parts rely too heavily on these touch inputs and when the controller just doesn’t want to point where you want it to there can be a considerable amount of frustrated flailing. Even in handheld mode the system isn’t ideal because you need to remove one hand from the unit to instigate the touch, or rotation if you’re spinwheels and this really can break your momentum.

On the 3DS though the game itself takes place on the top screen, while a representation of it is also rendered on the bottom screen; you use the bottom screen to move the camera around and to use those all important touch inputs. The problem is that the touches can get in the way of the camera movements, so when you want to rotate the camera you can wind up tapping on an enemy instead and screwing up your timing, it’s not a terrible solution, but it is fiddly. Other than that the game has all the features from the other versions, so if you don’t have access to a Switch or a Wii U you won’t be missing out on anything by opting for Nintendo’s other handheld system.

It’s nice that Captain Toad has another lease of life on the Switch and 3DS, but I’d stop short of claiming that it’s a perfect fit for Nintendo’s new machine. The touch input solution isn’t ideal, and there’s not really much added from the Wii U version. There are three Mario Odyssey themed levels based on the Sand Kingdom, Cascade Kingdom and New Donk City, and these three levels are even more jam packed with little intricacies than any others before them, it’s just a shame that there’s only the three of them to play, a boss battle against the dragon in the Ruined Kingdom or a visit to Bowser’s Castle would have been very welcome additions here. If you missed out on Captain Toad the first time round then this is a must buy regardless of format you pick it up on, if however you did play it on Wii U then that question is a little trickier, as there’s not a lot here that’s new and from a control standpoint it is slightly worse. It looks great no matter how you play it, 1080p in TV mode and 720p in handheld mode but a consistent 60fps, and it also looks brilliant on 3DS.

The best part is that this is a great game to play on the go, the levels are short enough to crack out a couple on a short commute or loads on a long one, and they’re packed with extra challenges that take little time to accomplish as well. Yes there are some problems with the transition from machine to machine(s), but this is still a very welcome return of this brand of puzzle-action. I really hope that people do support this re-release because it might give Nintendo that push to make a sequel and that would be very welcome indeed.

Strap on your spelunking light and head into adventure with Captain Toad, you won’t regret it.