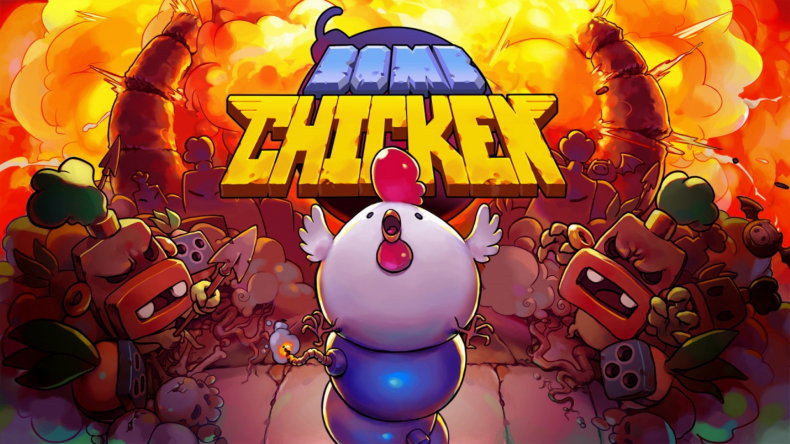 Bomb Chicken is a 2D action platformer that is a “pun penner’s” dream. Hatching first on Switch with a PC release scheduled for later, it is a veritable delight of groan worthy puns with its eggsplosive action. Playing as a corpulent hen, who through a freak accident can lay bombs, you are the unlikely hero of the story, tasked with escaping from a hell hole that appears to be a fast food establishment. Aside from the inevitability of the word play around the concept, it turns out that Bomb Chicken, for the most part, is a cracking (sorry!) good time too, largely thanks to the simplicity of the game mechanics, and the likeability of your fat hen.

The setting is an establishment called BFC, an apparently huge fast food, chicken business that is populated by mindless drones. The secret ingredient at BFC isn’t a blend of herbs and spices though, rather a mysterious blue substance that renders the chicken (presumably) so ridiculously tasty that the punters keep coming back for more. Your chubby hen, understandably doesn’t want to be a part of this particular food chain, and through the help of a mysterious benefactor that is powered by the blue goo you are sent on a task to escape the factory and beyond. The blue stuff has imbued your chicken with some special powers; she remains flightless, and is frankly too rotund to jump, rather she can squeeze out bombs instead of eggs at an alarming rate. These bombs can be squirted out, one on top of the other so she can reach platforms above her, used as temporary shields from incoming attacks, or even pushed to flick switches and kill enemies. She isn’t immune to the explosions though, so if you sit too long on her terrifying progeny, you too will explode with what is a very satisfying pop.

As with most action platformers, the difficulty slowly ramps up. Gradually more enemies are added and the machinery of the food processing factory need to be navigated. Levels are reasonably short, and there is a generous checkpoint system that encourages you to have another go. Littered about the levels are blue gems that your mysterious benefactor demands at the end of each level. Collect enough and you will get another health heart meaning you have one more chance before the “Game Over” screen flashes up. These early levels are a satisfying blend of learning to co-ordinate the simple mechanics into consistent flow that sees you through to the end, and trying to ensure that you avoid the mistakes that cost you a health heart.

After a number of levels you are presented with a boss level and this is where some problems do start to seep in. The generosity of the game play outside of the designated “Boss” levels completely evaporates meaning that instead of well-placed checkpoints, you now have to navigate the entirety of the level in one go without any deaths. This would be perfectly fine if the rest of the levels leading up to these encounters provided you with some warning that things were likely to change so dramatically, but nothing does and it seems odd to ramp up the difficulty so steeply. Once you manage to run through the boss level and complete it without making a mistake, you are returned to the normal run of things with generous checkpoints littered throughout each level. It has the effect of creating waves of tension which I don’t think works entirely well with the smoothness of everything else. Visually, Bomb Chicken is delightful. Your fat hen in particular is animated with good humour. She bobs along the level in a chirpy manner, and her bombs explode with a riot of colour. Killing an enemy is also satisfying, if they are blown up they will cry out and then pop, or if you hit them with a rolling bomb they fly off the side of the screen. There’s also lots of little amusing details with the factory workers taking time out from the chicken murder to scrub the toilets or sit and play a video game, as well as a bouncy soundtrack to accompany it all.

Bomb Chicken is a fun little action platformer. Veterans of this type of game may find elements of it way too easy, whereas more casual players may find the dramatic spikes in difficulty a little bothersome and roadblocks to their progress at times. Either way, it is a pleasant experience, thanks in no small part to the simplicity of the mechanics and the humorous touches in both the animation and audio design.

Too easy in places
Difficulty spikes in really random ways

Bomb Chicken is a fun little platformer that doesn't quite manage to balance its difficulty consistently throughout its entirety. Simple mechanics and an adorable fat hen do mean though that you'll have a good time for the most part.