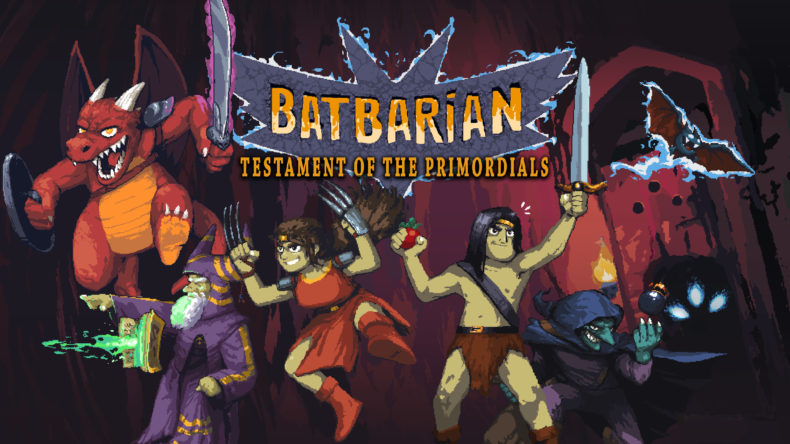 Batbarian: Testament of the Primordials, teh 2D action adventure puzzler, has a release date for PC & Switch! In Batbarian: Testament of the Primordials you choose between two barbarian characters then dive head first into some dungeon crawling action. As expected, because you’re a barbarian, you’ll have to use your fighting skills against plenty of enemies. Along the way to light your way, is Pip your magical bat pal. You can’t rely on fighting alone as there are plenty of puzzles littered through the dungeons to test you. Luckily Pip will be there to help through any puzzling aspects.

There’s plenty to keep you going as, according to the devs, Batbarian: Testament of the Primordials has:

There are also RPG elements with a level-up mini game system and multiple endings based on choices and actions. Some NPC’s will also join your party adding another layer of action and strategy to your fights.

“I am extremely excited to finally get to share our game with players all around the world. Like many other indie game stories, Batbarian has been quite the journey -of 4 years- and I’m really proud that we’ve stuck to our original vision. This is a massive game. I can’t wait to see if players can find all the secrets and hear their reactions to the twists and surprises we’ve put into the game,” said Frederic Tarabout, lead game designer at Unspeakable Pixels. “Thanks to everyone who’s believed in us, supported us and helped us bring the world of Batbarian to life. I’ve dreamt of creating games since I was 6 and it’s finally coming true, thanks to you!”

Batbarian: Testament of the Primordials will be shown at Tokyo Game Show 2020. The game will be available on Switch, Steam, GOG, Humble Store and itch.io from October 15.

Along with the release date is also an announcement trailer which you can find just below this.