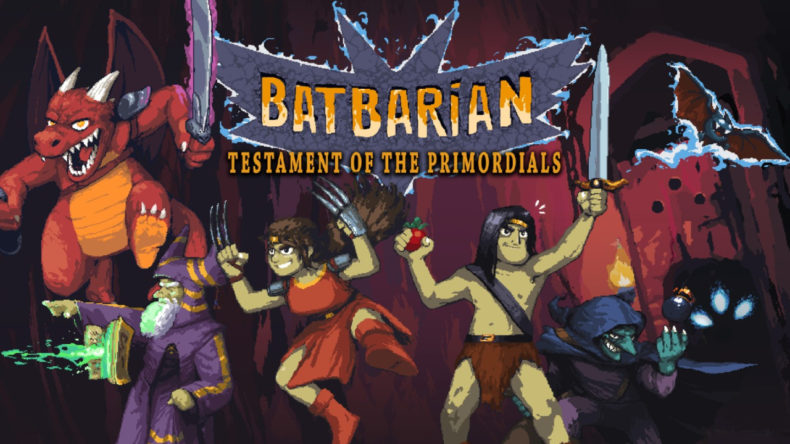 Humour in the gaming world is easy to overdo. Look back at the cringe of Ctrl+Alt+Del comics or the overt and obvious crassness of Duke Nukem: Forever and you can see how easy it is to fundamentally miss the mark. This was my worry upon first seeing Batbarian: Testament of the Primordials. It has a somewhat wacky cover art and its pun title only really works visually. Luckily, this is the only part of Batbarian where its visuals and humour felt off. The humour is self-referential and fun and so is its art style. This is a game that just loves being a game. It doesn’t try to impress but that, in itself, is a little impressive. See, I can be self-referential too.

Taking little bits from Metroidvanias, parts from RPGs and the look of Conan the Barbarian and you have Batbarian: Testament of the Primordials, a cave-dwelling platformer RPG with plenty of humour. After picking your respective character, you and Pip, your glow-in-the-dark bat friend, are sent plummeting to the bottom of a large cave. Initially, all you can see are your hearts at the top left, the map at the top right and you in the middle. This, essentially sets you up for the type of game Batbarian is almost immediately. The sparse story and emphasis on a map means you’ve landed headfirst into Metroidvania territory, scary for those with little patience. Luckily, I am not one of those people and stepped further into the abyss. 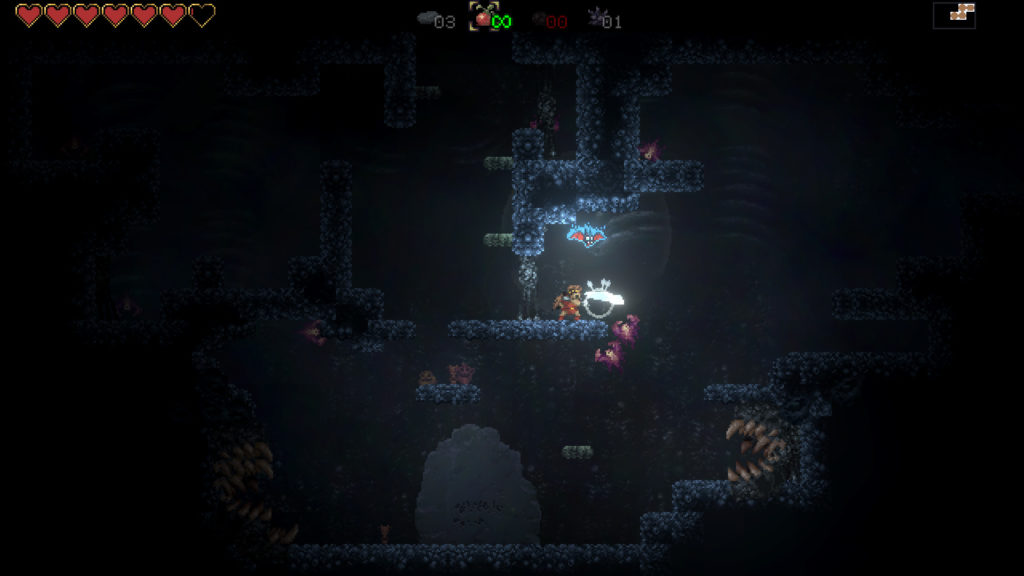 Like most games, the first few rooms works as a basic tutorial. You must jump, slash and solve your way through each room to get to the little bits of story on the other side. In a sense, the entire game takes after this philosophy. Its game design is that of a classic Metroidvania showing you a path, forcing you to understand you can’t make your way through and then smashing that perception to pieces as you earn new skills. Vines in your way? You’ll figure it out later. Platform too high? Wait for it. I wasn’t joking when I said this game might test your patience. Sometimes, you might find yourself combing through every room for a secret entrance, new puzzle or new way to understand certain skills.

The humour, music, and moment to moment gameplay do a decent job at dispelling the boredom one might otherwise feel. There is a rather consistent tone to jokes, often having them employed at pivotal moments for levity or at save spots to get a little more information out of the world. Before a particularly tense boss fight, you might find out your constant need to bash everyone on the head has lead you down an absurd path or your unwillingness to bash everyone on the head has had uncertain circumstances. This is something its humour does well. Playing into that traditional formula, it likes to set you up for something and pull the rug from underneath you. Its best humour hits when you aren’t expecting it to. 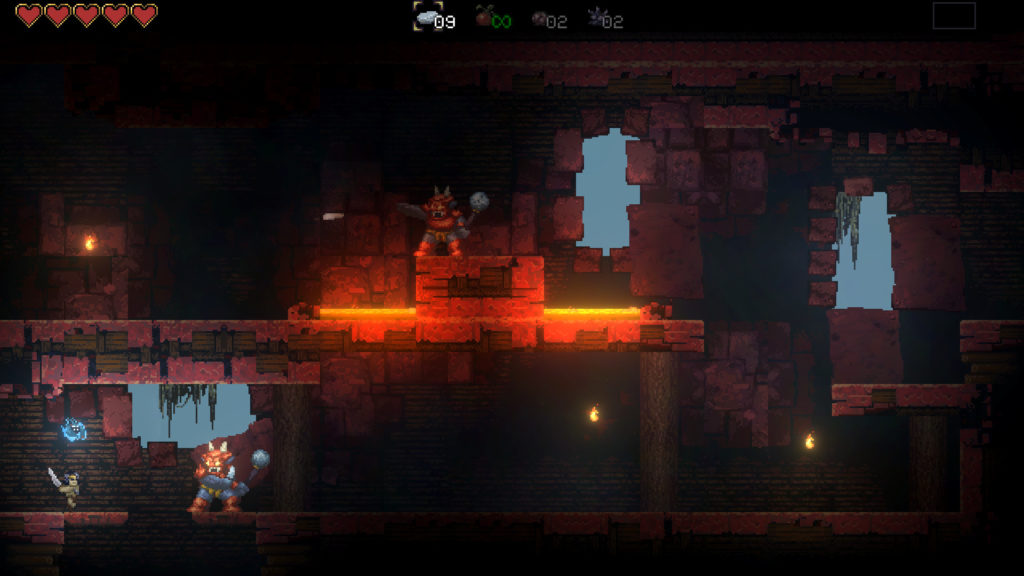 This is what makes it a bit better than titles that market themselves as “comedy games”. Barbarian: Testament of the Primordials is, fundamentally, a game above all else. Less funny games throw ten jokes a minute at you never letting you appreciate when it’s actually funny. Rather than offering levity, the moments of silence become your one joy. Speaking of silence, Barbarian has some quite enjoyable music. It fills a kind of synth orchestra with midi violins, synths, bass and drums. Fit cyberpunk drums to the piano and violin of a JRPG and top it off with some 16-bit percussion and you should have a decent idea of what type of music you will listen to throughout your time with Batbarian. This is accentuated with its sound effects. Opening chests is accompanied by a triumphant fanfare where dying is punctuated with the sound of silence. This is a simple but effective way of making your deaths a little more brutal and your accomplishments a little more enjoyable.

The gameplay of Batbarian: Testament of the Primordials is rather basic but gets better with time. You start off with a sword swing and a jump and this arsenal is added to by thrown abilities, ways of manipulating your bat and more. The platforming feels reasonably good but the basic attacks don’t get any better as you get further into the game. Later boss fights that require well-timed attacks start to really show how mediocre attacking is but platforming serves to prove how great some of the mechanics are. Your bat, Pip has a light as he moves. This can be manipulated with items to make him stay in certain spots or fly across areas. Whilst it takes a little while to get used to, manipulating his element and placement mid-jump becomes a fundamental part of traversal as you get on. 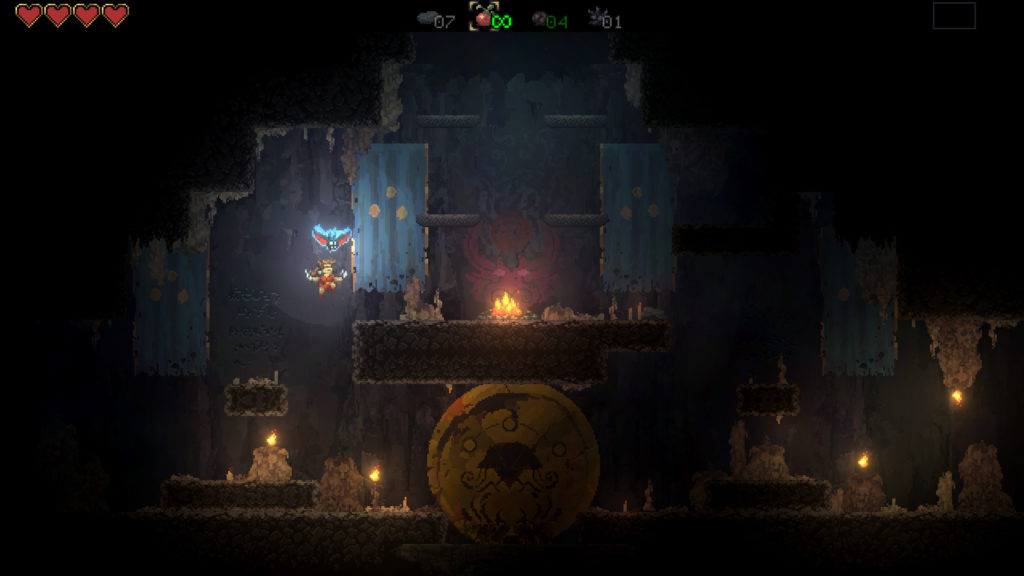 Whilst this helps to accentuate some long term goals, levels, upgrades and collectables keep you consistently growing in the short term. It has an exp system that awards you random stat upgrades each level and collectable items can help to increase your defence, attack, awareness, and even health if you’re lucky. This means that if an area or enemy is giving you a particularly bad time, you can choose to come back later, a convenience not afforded to you in most titles of its calibre. In this sense, Batbarian isn’t majorly challenging and probably benefits from that. Little running gags of enemies, friends and those in between punctuate your trek through the vast caves and come just regularly enough to remind you that you are, in fact, progressing. You (and your little bat friend) can make it to that light or bat-shaped light at the end of the tunnel.

In true Metroidvania fashion, I felt much more impressive by the end of Batbarian than at the start. Slashing, jumping and levelling through each challenge felt satisfying and rather rewarding. Whilst later challenges enunciate the mediocre combat, they also serve to show off its diverse mechanics. The general theming, visuals, music and humour of Batbarian are over the top but never annoying. Its story is a mix of cliches but it plays with them in humorous ways. Ultimately, while Batbarian: Testament of the Primordials may not blow your mind, it’ll definitely offer you the odd chuckle and mechanics just robust enough to keep you coming back.

Ultimately, while Batbarian may not blow your mind, it’ll offer the odd chuckle, and mechanics just robust enough to keep you coming back.

You may also like
Batbarian: Testament of the Primordialsdangen entertainment