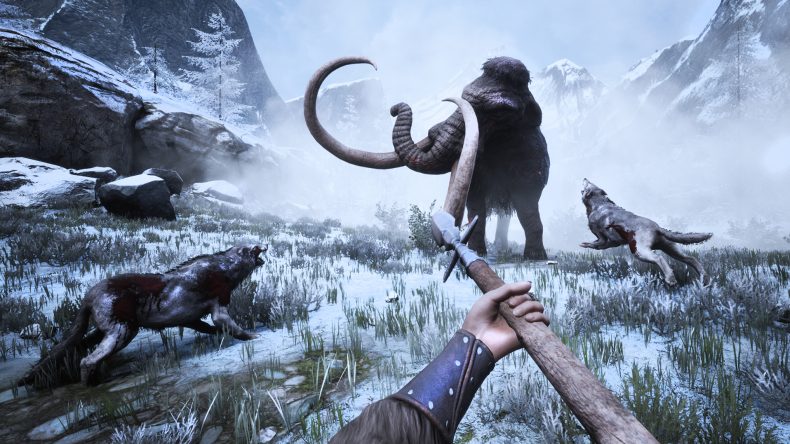 Conan Exiles makes its way out of early access into a fully released title on consoles and PC. Developer, Funcom has managed to capture the evocative nature of Robert E. Howard’s fictional Hyborian Age with some style. There is a brutality in the world which fits entirely with the mythology created for the Conan universe. Huge monolithic structures litter the landscape, often with fantastical creatures lurking inside them which invite and encourage exploration. Diverse and varied environments, each with their own hardships to overcome create a sense of adventure and experimentation with Exiles’ extensive crafting system, but obtuse menus, a lack of anything remotely resembling a tutorial, woeful hit detection, and severe net-coding issues mar the game and stop it from becoming something special.

You begin with your character crucified in the harsh desert landscape. The customisation options are fairly limited with an ability to choose one of the many races from Howard’s fiction, as well as options on skin colour, height and musculature. Contrary to the preview version that was on the Xbox One platform, the full release (at least in the EU) also comes with the much talked about penis slider to go with the female boob slider. I wouldn’t usually talk about the rendering of human genitals in a video game, but the attention to detail lavished on the male member, gently wafting in the breeze and swaying pendulously whilst stood still seems indicative of some of the more pressing issues that Conan Exiles suffers from. The Conan universe is an unforgiving world, and Conan Exiles excels in capturing that. Everything wants to kill you; if you aren’t gored by one of the many beasts, or cleaved in two by super aggressive bandits within the first few hours, you will almost certainly die of thirst or hunger. On your own it is particularly brutal, with a huge map to explore and diverse biomes that bring with them their own challenges, from the searing heat of the deserts to the bitter cold of the northern snowy regions, and the damp, poisonous mists of the rain-forested areas. Your first order of business is to find some shelter and secure a source of water and food, but the game tells you absolutely nothing about how to go about that.

These opening hours are full of experimentation by pressing the various buttons on your controller to work out what does what. Gathering items seems to be a process of walking near them and spamming one of the buttons, the next conundrum to solve is how to examine your inventory, and then once you can do that, work out how to navigate around it and craft things with the items you have gathered. Checking your inventory you realise it is mostly empty, until you accidentally press another button in pure frustration and find out that the items have assigned themselves in a hot bar, and now you have no idea how to remove them from that and actually use them to craft things with. It is all unnecessarily fiddly and does nothing to encourage you to return, particularly after your twentieth death to thirst or a mauling by one of the many river crocodiles.

If you can bear the first few hours of pain and you manage to construct a decent bit of shelter and have secured a food source things do start to ease up. Things you do in the world like exploring, crafting, or killing enemies and creatures gives you attribute points which you can put into typical RPG like statistics like Strength, Vitality, Grit, and Endurance. With each level gained you also accrue knowledge points which you can put into “Feats” which are essentially crafting recipes across various disciplines such as building, armourer, and weapon smith, as well as survival related recipes like a well, or decorative recipes to make your shelter look nice and religious altars that once upgraded will allow you to summon a devastating deity to take into battle with you. None of this is explained to you though, and the menus provide very little to guide you at all. Much of my time spent with Conan Exiles has been a process of experimentation between myself and my clan mates and countless references to a community built wiki. Fish, for example, can provide a good source of food which once cooked gives you a by product called Ichor that can in turn be used in the transmutation of iron to steel, but if you put your freshly caught fish into a press it will produce an oil that burns far more efficiently in a furnace that in turn speeds up the lengthy process of transforming stone into brick and brick into hardened stone.

Crafting and upgrading will take up the majority of your time with each tier requiring more ingredients in both quantity and complexity. On your own progress is excruciatingly slow to the point of not being worth it, things can be improved by playing co-op with a friend or logging onto one of the online servers that are available. Be warned though, the official servers have a capacity of forty players currently and good luck if you wish to access all your hard work at busy points during the day with all of them at capacity and no means to queue for a space other than spamming “Join Server” constantly. To compound these capacity issues, on PvP servers there is a set time where bases can be attacked by other players which coincides with the busy periods and even on PvE servers there is still a devastating event called “The Purge” that rips through the world destroying all but the most secure of buildings. You may well find that after a good few hours worth of building and progress, by the next time you manage to log on to your server of choice all your hard work has been destroyed any way. The crafting system is incredibly deep, with several tiers of armour and building materials, as well as a vast array of cosmetic items from animal skin drums, to silk cushions and decorative pots. In keeping with the barbarity of the source material, things can be sped up by visiting any one of the various bandit camps littered about the map, clubbing an NPC until they collapse and then dragging them back to your base to be broken on the Wheel of Pain. Once a suitable amount of time has passed and their spirit is truly broken, you can set them as thralls to work at your various crafting stations producing the more time-consuming materials for building and crafting. It all still feels like a relentless grind though, with each login a process of checking all the crafting stations, filling them up with the raw materials again and venturing out to gather more for the next time. It is all pretty compelling though as there are always jobs to be done, but there is no getting away from the fact that much of the stuff you do in Conan is pure busy work.

In an attempt to provide some focus to your activities there are various loose story chapters that contain steps to complete. In the early days these consist of things like find shelter, make a weapon and kill an animal. As you progress it includes other things like killing enormous boss creatures and visiting some of the more remote areas of the map. These Journey steps do a good job of giving you some direction, however the combat is woeful. I understand that it is meant to feel weighty, with heavy swings of huge war axes and longswords and deft rolls out of trouble, but the reality is far from it. Hit detection is non-existent, the dodge roll inexplicably focused on the direction your character is facing rather than the more logical up is forward, down is backward (or vice versa if you prefer inverted) and atrocious server lag and frame-rate issues make any form of combat a total chore. I have lost count of the times I have been fighting a group of bandits only for my character to warp in a direction I didn’t want it to, get stuck for an interminable second on something and then once I regain control realise I have been killed and I now face a lengthy, naked and vulnerable run from my last spawn point to my dead body to reclaim my inventory. And that is, of course, if my body is still there and hasn’t become embedded in the scenery making it impossible to retrieve my items at all. I enjoy Conan Exiles, perhaps in part because I am on a busy server and am in a clan which is logging on regularly and progress is very visible, but there is no getting away from the fact that the things that Exiles is supposed to do – the fundamentals of what the game is – are lacking. Combat is dire, building has peculiar quirks where items won’t snap when they are supposed to, crafting is overly complex with no explanation of how to do anything, the menus are obtuse and difficult to navigate and that is without discussing the bugs that mean characters are invisible except for the weapon they have drawn, or the one where a character appears to be lying down all the time. And then there are the server issues which bring with them their own set of problems.

There is a great foundation in place with Conan Exiles. It feels like it has the potential to be an excellent open-world survival, crafting, RPG, MMO cross mix game. The map has a real sense of place and the brutality of Howard’s Hyborian Age is properly realised, but it does feel like if there had been less time spent on rendering anatomically correct human genitals and more time on resolving some of the many technical issues that abound then it would feel more finished than it does currently.

Great fun with friends and other players
Rich and varied environments make exploring interesting
Well realised use of Conan license.

Conan Exiles excels in its sense of place, and has an absorbing and complex crafting system that will keep you coming back, but there is no escaping that it is a deeply flawed game that still feels a little unfinished.