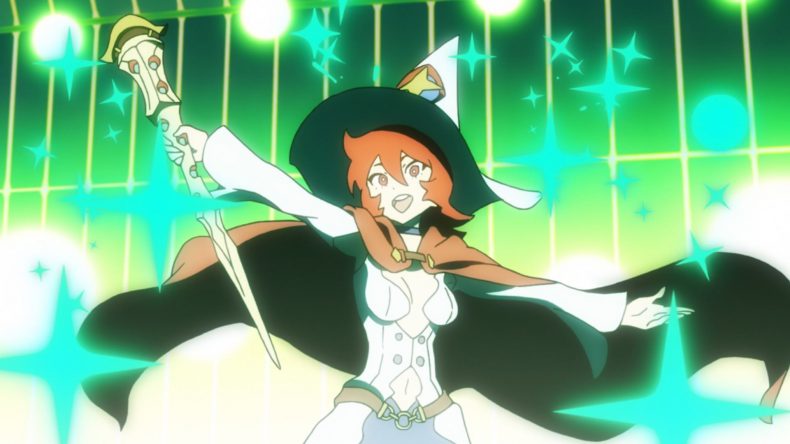 Every now and then I like to consider the games of yesteryear, a period where licensed tie-ins had almost nothing to do with their subject matter outside of a passing resemblance in aesthetics. The thing is, this rather late Groundhog Day game has nothing to do with the movie, they didn’t even bother to get Bill Murray involved.

I jest of course, this is Little Witch Academia, a Netflix produced anime about a boarding school for witches in which Atsuko (Akko) Kagari has enrolled in the prestigious Luna Nova academy so she can become a witch like her hero Shiny Chariot. The Chamber Of Time is a completely separate spin-off from the series with a storyline unique to the game itself. While cleaning up the library Akko manages to find a secret passage to a chamber with a grand clock, and now finds herself repeating the first day of summer vacation over and over again. Now Akko and her friends must try and figure out the mystery of the clock so they can actually do something fun with their holiday.

The idea of the game is a good one at least. Repeating the same day means you get to learn people’s routines and use the information you learn to either prevent things happening or ensure they do occur. As well as this, investigating the school leads to keys which can be used in the chamber which in turn leads to dungeons to explore in a Final Fight/Streets Of Rage style side scrolling beat ‘em up, which is not the game style I had envisioned for this when I went in to it. In terms of subject matter, A+ Game’s has done a fairly good job of retaining the feel of the show. Akko, Sucy, and Lotte look just like their hand drawn counterparts and Luna Nova is a brilliant facsimile of the school, it’s just a shame that main characters Amanda and Diana don’t really look like themselves, and for some reason the faculty members are so badly aliased that you could grate cheese on their rough edges.

It does appear that almost too much effort has gone into the way the game looks without paying attention to the little details. It could be a case of the Unity Engine not being up to scratch, but the frame rate is woefully inconsistent, with animations dropping to flipbook-sequence levels in untaxing periods or being fine in great open areas with plenty of characters populating them. Disappointingly the game also doesn’t feature the English voice cast of the show, which considering its Netflix roots makes this decision unforgivable.

The dungeon exploring elements are okay, with you taking a team of three into a sequence of rooms firing spells at monsters and fighting a boss at the end. Here you’ll pick up items and gain experience with which you’ll improve your base stats and unlock new spells. But overall it just feels a bit too samey, and your AI compatriots are rubbish. I lost count of the amount of times they glitched to the spot or wandered right into traps, their path routines are rudimentary at best, and they make no effort to dodge attacks at all. Realistically you’ll probably spend more of your time exploring the school, taking up side-quests and solving the puzzling problems of your fellow school denizens, and it’s here the game falls down further. The game tasks you with remembering minute details yourself, giving you tidbits of info and never keeping a record of them for you, if you don’t want to have to keep asking people the same questions you’ll need to write things down yourself.

In keeping with this you’ll find there are times where the game requires you to go somewhere while avoiding someone else, at which point you’ll think yourself lucky to find them in a place two rooms away from where you need to go, but people teleport from room to room should your current quest require it. Planning to use their location as a means to get past them winds up with them suddenly appearing in another place at the exact same time, I mean, what’s the point in learning people’s routines if you can’t use them against them and even in a game about a school of witches, such short distance teleportation requires just too much suspension of disbelief. Finally, outside of battle Akko cannot use magic on her own, and instead requires the assistance of potions to ensure she can cast them successfully, to get them you need to buy them using spell stones gained from dungeons. To highlight what a dumb design decision this is, it should be noted that you need to use them to open up save points throughout the school, without which you cannot save the game at all. The thing is, in the anime there were some spells Akko could perform unaided, here she’s useless without a potion and even then she needs to learn the spell first. It’s just a needless gimmick that should have been done away with.

It’s a shame that The Chamber Of Time came out like this, for all the effort in getting the school, Akko, Sucy, and Lotte just right it just feels like not enough care and attention was given to actually making the game interesting. It’s a real testament to the flexibility of the Unity Engine that it’s able to create a game that looks quite striking at times, but ultimately seems to struggle under the weight of its expectations. I had high hopes for this, but an initially good start falls away to monotony and frustration, and there’s no magic wand to fix this.

Sometimes nice to look at

A good premise that just doesn’t match up to it’s execution, much like one of Akko’s spells.

Little Witch Academia: Chamber of Time out now on PS4 and PC