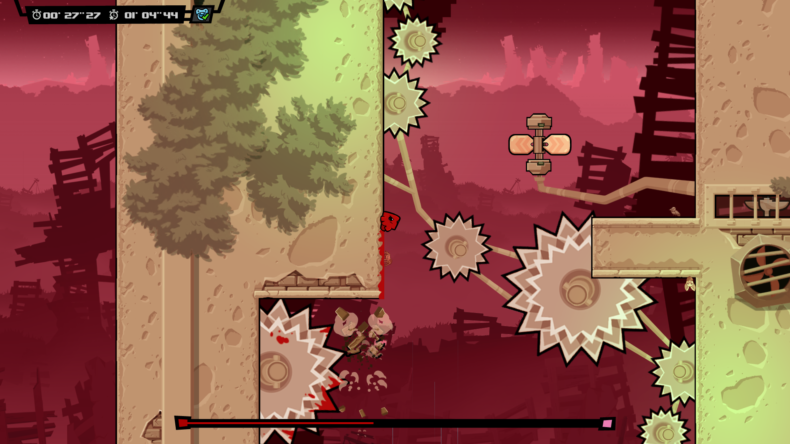 The footage was revealed during a developer livestream commemorating the ten year anniversary of Super Meat Boy.

The stream showed footage that revealed a spoiler-free look at the light world and dark world in the first four chapters of the game. The stream also went into detail about how New Game Plus works, as well as some other new features.

The Meat Boy Saga promises to be moved forward with this much anticipated sequel. Meat Boy and his partner Bandage Girl have had a baby called Nugget, who has been kidnapped by the sinister stillborn psychopath, Dr. Fetus. Meat Boy and Bandage Girl along with some new friends in the Meat Boy Cinematic Universe set out to rescue the kidnapped child.

There are some changes for Meat Boy, he has been pumping iron in the gym and now has a Battletoads-esque right fist, as well as a new slide and plummet manoeuvre.

“Much has happened in the decade since Super Meat Boy launched on Xbox Live Arcade,” said  Team Meat co-founder and Creative Director Tommy Refenes. “A new generation of consoles came and nearly went, some folks made a movie about the development of Super Meat Boy, 2020 happened and the less said about that the better. And we’re proud that Meat Boy remains as beefy and bloody as ever!”

Levels are randomly generated in Super Meat Boy Forever, and each time the game is complete the option to replay the game will appear and generate a whole new experience by presenting different levels with their own unique secret locations. You can play Super Meat Boy Forever from start to finish several times before ever seeing a duplicate level, as each one is handcrafted.

Super Meat Boy Forever will launch on Nintendo Switch, PlayStation4, Xbox One and PC. There is no official date as yet, but the developers promise it won’t be another ten years!