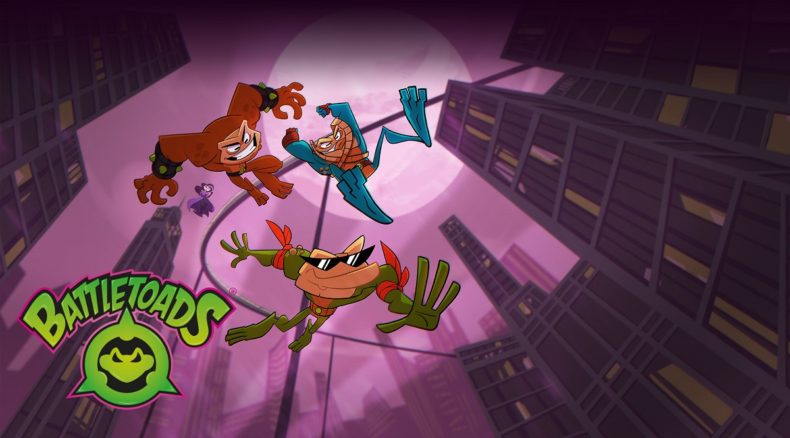 I’d completely forgotten that the Battletoads were getting a new outing this year. Announced at E3 in 2018, it took another year for people to see any gameplay, debuting a new trailer at E3 2019. Then, at November’s XO19, a select few got to actually play the game. It’s been a long drawn out process, and there hasn’t been a particularly aggressive marketing campaign or any buzz at all. The word Battletoads can send shivers down your spine, as the urban legend of its torturous difficulty grows with every passing year. When it featured on 2015’s Rare Replay, I gave it another go, and yeah, it’s hard, but I wouldn’t say I was craving the chance to play any kind of reboot or remaster. Why would Dlala Studios and Rare want to resurrect a dead franchise that has lay dormant for 26 years? What fresh life could they breath into a new Battletoads game?

I’m going to make a pretty big statement here, so you might want to sit down. Battletoads is currently in my top five games of the year. If ever there was a game to bring unbridled joy and copious amounts of belly laughs, the Battletoads reboot provides it in spades. I can’t stress how good the side-scrolling fighting is. Each of the Battletoads has different moves, and you’ve got a wide range of abilities to help you through the challenging levels. Rash is the more balanced character; Pimple is the slow but powerful brute, and Zitz is the faster of the three. 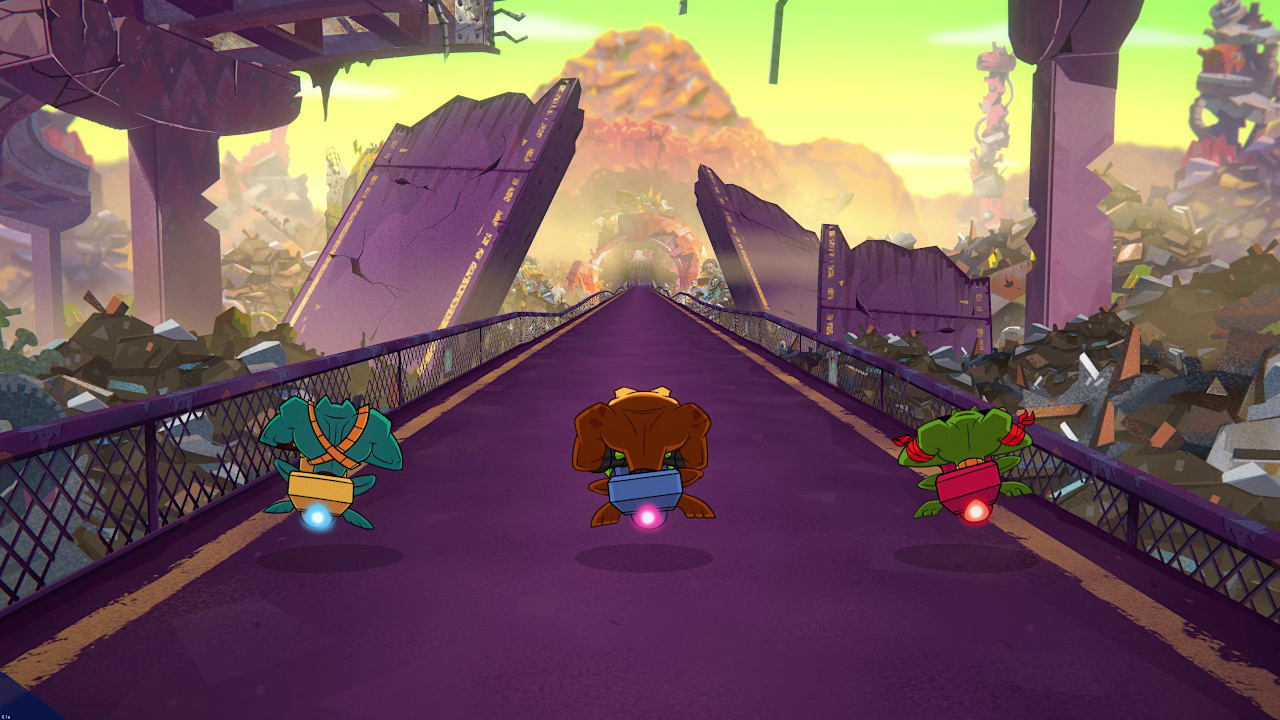 You can hammer the attack button, but dashing out the way is just as important as beating up your enemies. Each toad has a power move, and the animations for each one are fantastic. You can also spit bubblegum at your foes to temporarily hold them in place, and you can use your tongue to pull them closer for a barrage of melee attacks. Much of the game throws myriad bad guys at you at any one time, and they all have specific abilities that will cause you to attack them differently every time.

The designs of the enemies are diverse, and their attack patterns are equally as varied. Some will combust into balls of electricity that can conduct in water and create a bigger surface area of damage, others will charge at you and wipe out a large portion of health, whilst long range enemies will fire everything from lasers, axes, and ice cream at you. Battletoads is chaotic, throwing every possible challenge at you, but the multitude of attacks at your disposal mean you’ve always got a way to deal with whatever the game throws at you. Switching between characters is always available as long as they haven’t been Knocked Out, and when one does get knocked out, another toad will spawn, however, if Rash, Pimple, and Zitz get wiped out in quick succession, you’ll be forced to restart from the last checkpoint. If your health is getting low, you can use your tongue to eat flies that get left behind once an enemy is killed.

There are different difficulty settings, but even on normal the game provides a challenge. The frantic nature of the action in the side-scrolling sections is so much fun to play. Given the range of different moves across all three of the Battletoads, it makes for such an excellent beat-em-up. There’s also a handful of boss fights that tend to follow the three-phase rule, challenging you to switch between the toads to make the most out of their abilities. One of the first bosses requires you to destroy its eyes by pulling them out of its head. Pimple is the strongest Battletoad, so using him to destroy them is needed, but the rate that the pink eyes (yeah) keep spawning requires the speed and versatility of Zitz. 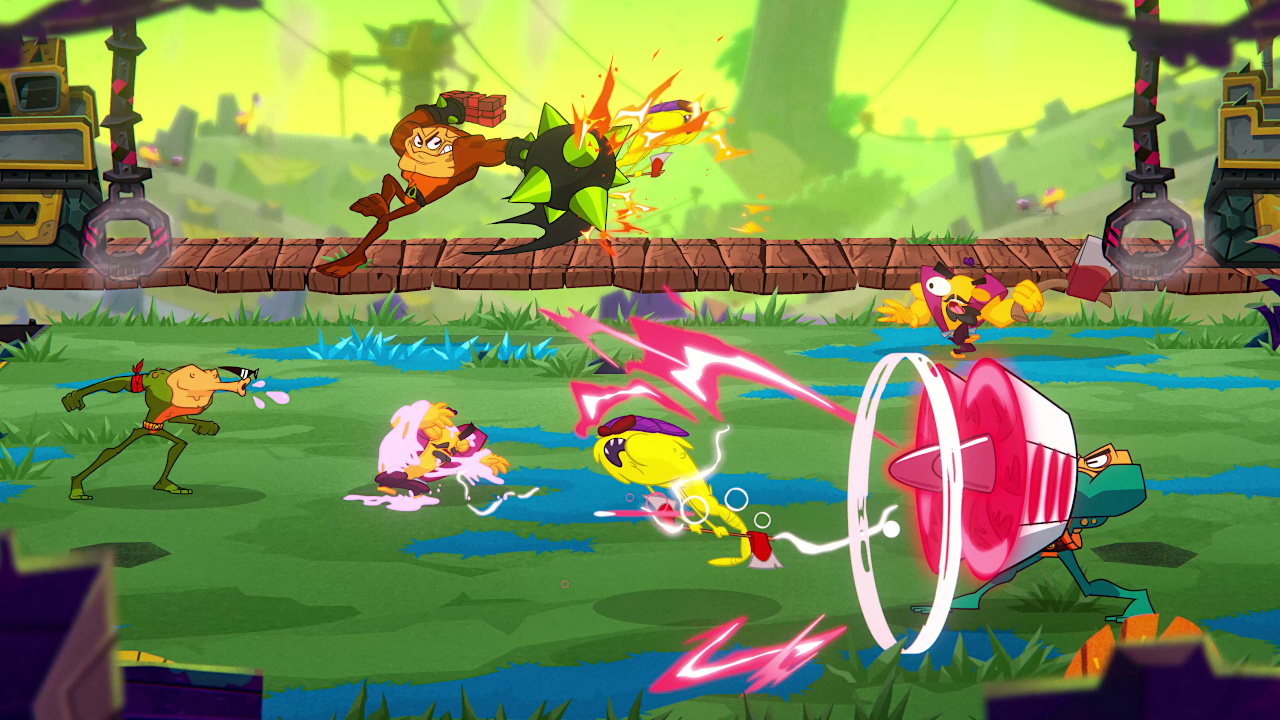 Along with these sections, there are plenty of other areas where it takes the foot off the pedal and gives you other ways to play. The Turbo Tunnel returns early on, and although it’s pretty damn tricky, it’s also one hell of a ride, opting for a 3D reinvention this time around. Some levels are silly, like when you play a variation of rock, paper, scissors, or you’re doing your day job of sitting at a desk and signing autographs at a crappy convention. The thing is, these distractions are dumb in the most positive ways, and you’ll embrace the humour of them instantly.

Throughout the levels you’ll also encounter puzzles that require to use your brain. You may need to hack a door by outsmarting a computer or press switches to allow the power to find a successful route to the end of the circuit. They are littered throughout, and much like the breaks from the side-scrolling action, they give you a chance to use your skills in a different way. There are also breaks in gameplay when Rash, Pimple, and Zitz have conversations with each other, and although they are only brief, they are just as funny as the cutscenes.

Battletoads feels like something you’d happily watch on Cartoon Network. It’s funny on different levels, much like Teen Titans Go! and The Amazing World of Gumball. I laughed a lot, not just at the jokes and the exceptional voice acting, but the multiple times the game goes meta. It pokes fun at itself all the time, and doesn’t hide the fact it’s an old franchise that never needed to make a comeback. The fact this game is so good is testament to what a great job has been done, proving that anything is possible.

The levels are gorgeous, featuring hand-drawn backgrounds filled with plenty of colour and bold designs. From the amusement parks to alien planets, everywhere you look gives you something gorgeous to admire. The cutscenes have been animated to a high level as well, and you’ll often forget that you’re playing a game. Battletoads is so vibrant and easy on the eyes that you’ll never get fed up of the art style.

Battletoads is an excellent side-scrolling beat-em-up that has reinvigorated a dormant franchise better than I ever could’ve imagined. The combat is varied and exciting, the cutscenes are hilarious, and the art style is absolutely gorgeous. You can play couch co-op throughout the game, but I do feel it needs online support to play with other friends. Regardless of this minor flaw, Battletoads is the biggest surprise of the year, and it is definitely a game everyone needs to play.

Battletoads is the reboot you never knew you wanted. It's fun to play and makes you laugh, two perfect ingredients for making a game well worth playing.