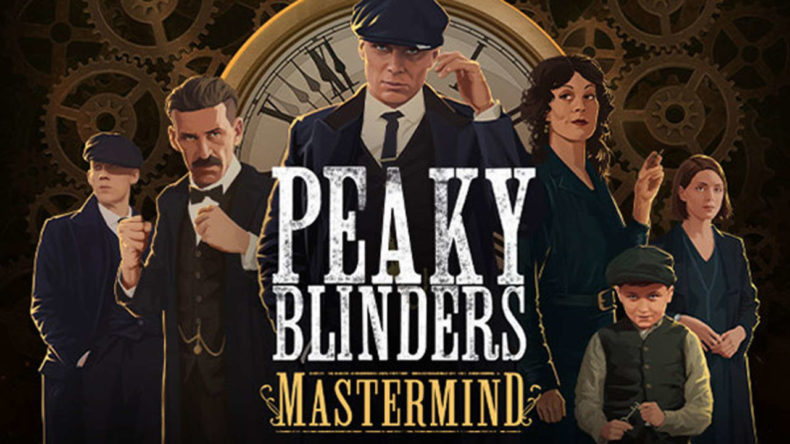 Tommy Shelby is one of the greatest TV characters of all time, and Peaky Blinders ranks near the top of the best shows the BBC has ever produced. Set in Birmingham after WWI, the Shelby family become one of the most notorious crime families in England, growing from the confines of Small Heath to London and beyond. Whilst the program is phenomenal, an isometric puzzle game seems like the least likely way to bring the Peaky Blinders into the video game medium. However, FuturLab has done something quite remarkable with its source material, and even though certain things are absent (the theme song, voice acting), the crux of the gameplay is smart and fulfilling.

Peaky Blinders: Mastermind is set before the first series of the show, where the Peaky Blinders is a small time gang, just after returning home from the Great War. If you’ve ever watched the show, you’ll know that Tommy Shelby is a meticulous planner. Perhaps his greatest accomplishment was stopping Luca Changretta in Season Four, doing so in a way that left viewers in awe. The Peaky Blinders are almost always one step ahead, and that is thanks to the mind of Tommy Shelby. This is the basis for Mastermind, and it works brilliantly once you get to grips with the mechanics. 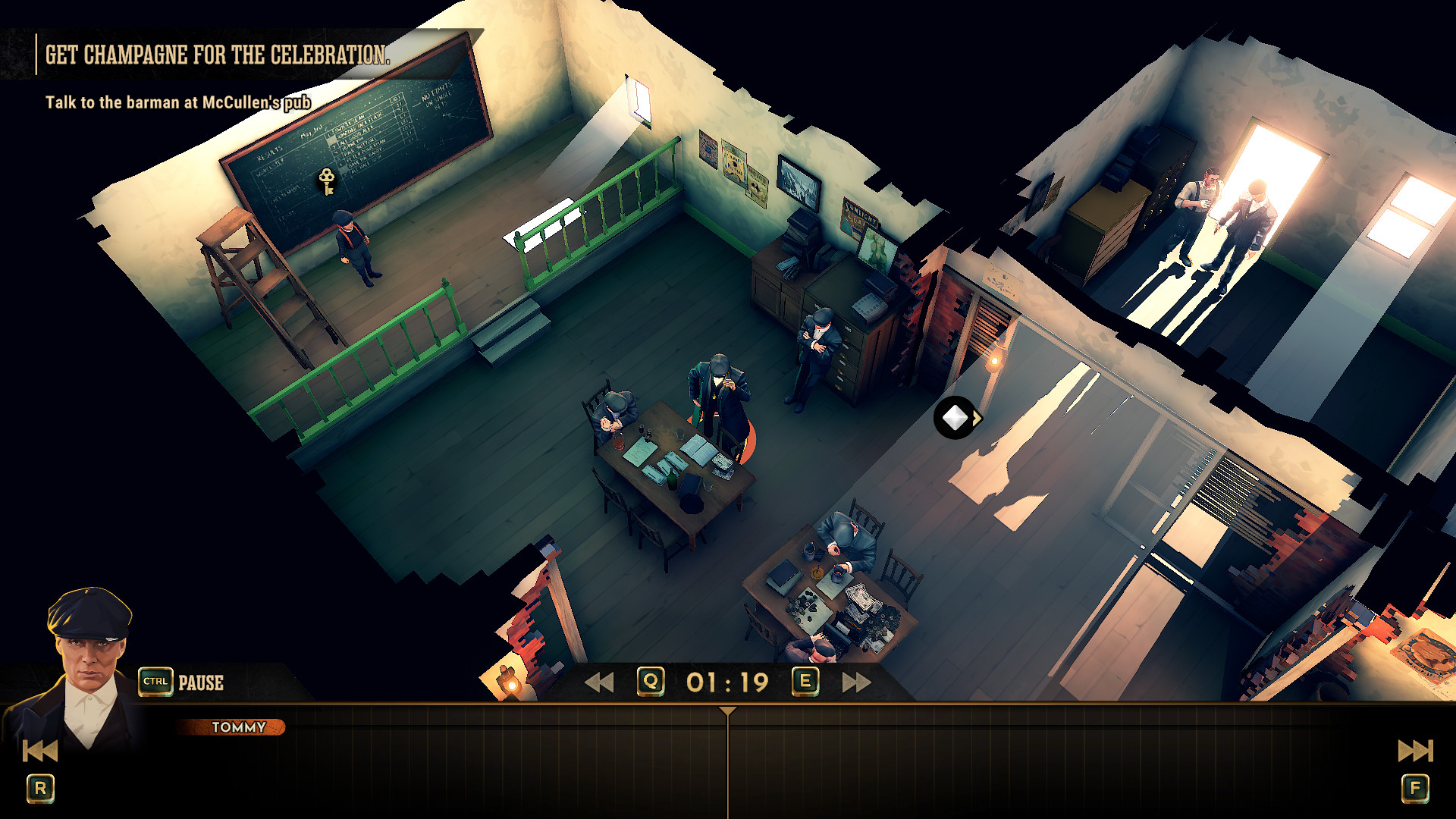 Throughout the various missions, you’ll take control of every member of the Shelbys, and each character has a specific skill that can be used to get past certain puzzles. Tommy is persuasive and can be used to get people to do jobs for him; Arthur kicks down doors and beats people up; John will also kick arses and set fire to things, and Finn can sneak through gaps where no-one else can. The female members of the family are just as important, just like they are on TV. Aunt Poll can pick locks and bribe people, whilst Ada is great at distracting and collecting information.

What makes Peaky Blinders: Mastermind so different, is the way you synchronise each character’s actions so that it all plays out rather beautifully. For example, when controlling Ada, you can distract a rival gang member by talking to them for as long as you want. If you were to then switch to Tommy and rewind to the moment Ada started the distraction, you can move Tommy past without him noticing. This is one of the more simple tasks, but as the game moves on, you’re carefully planning larger operations and it is here where the game shines. 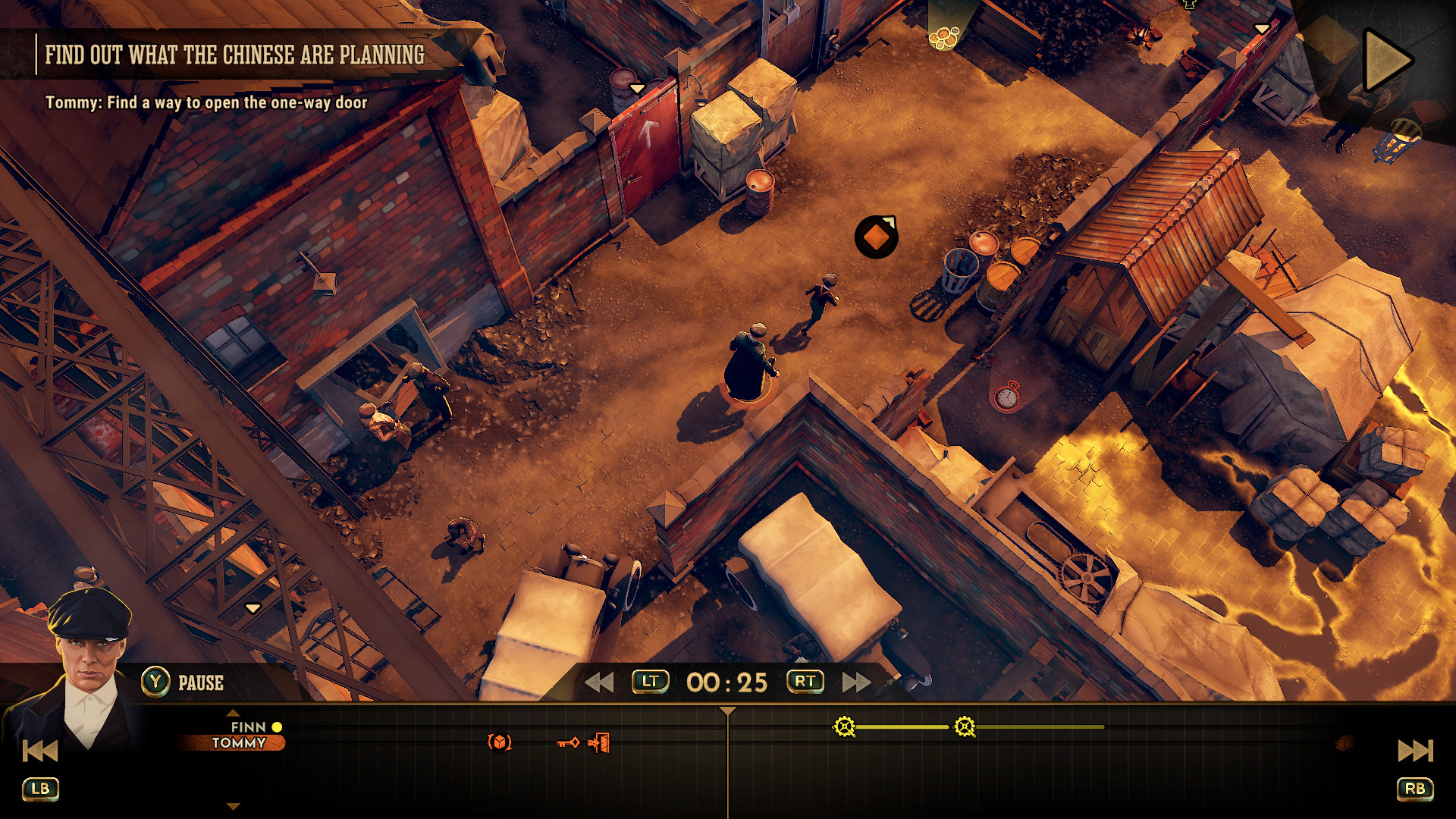 Layering up all your actions by rewinding the mission and switching to another character can take time. You’re having to make use of the time constraints by planning every move like a game of chess. For much of the early sections, you don’t use any violence. You can’t simply walk up to someone and beat the hell out of them, as Arthur and John don’t come into it until around midway. The further you get, the more synchronisation becomes vital. It will take time to master levels, and when you’re given limited time to reach objectives that present themselves throughout the ten scenarios, it’s easy to make mistakes.

Each level has a gold, silver, and bronze time to beat, and the quicker you are, the better your time will be. There’re also clock collectables to find as you play, giving you that little something extra to focus on. It can be frustrating when you’ve spent a good twenty minutes progressing through Small Heath, only to run out of time and have to completely rethink your steps, undoing all the work you’ve done up until that point. Peaky Blinders: Mastermind doesn’t have a complex difficulty, but there’re a lot of moving parts. If you lose concentration for a second, it can affect the entire mission.

The story centres around the implication of a Peaky Blinder in the murder of a Chinese opium dealer. Although the Chinese don’t feature until later on in the TV show, it’s a story that fits in well as far as the Peaky Blinders go. Before each mission begins, you’ll watch text-based cutscenes featuring beautifully painted screens that set up the story. Having none of the stars of the show voice their characters does feel off, but when reading the dialogue, you can easily hear the likes of Paul Anderson and Helen McCrory in your head. It’s also a shame that Nick Cave’s ‘Red Right Hand’ doesn’t blare out as you start the game, but the soundtrack is a nice fit, especially the instrumental soundtrack that plays as you make your way through the various missions.

Small Health looks exactly as you imagine, fitting in with the shows aesthetic, featuring grubby streets, the iron works, and drab warehouses. FuturLab has fitted a lot of detail into every mission, and it’s amazing how well it fits with the feel of the show. I thoroughly enjoyed the smart mechanics of Peaky Blinders: Mastermind. It pushes you to always think one step ahead, giving you the option to layer your actions, rewind, and reset to get the job done. If you’re not a fan of the show, you might not get as much out of it as those that have watched it, but the game gives everyone reason enough to enjoy how clever it is.

Tiny mistakes can be costly
No Nick Cave or voice acting

Peaky Blinders: Mastermind has some clever mechanics that highlight the meticulous planning Tommy Shelby is capable of, all whilst providing an interesting story and plenty of variety in character actions.