Tinytopia could end up being something pretty special | Hands-on preview 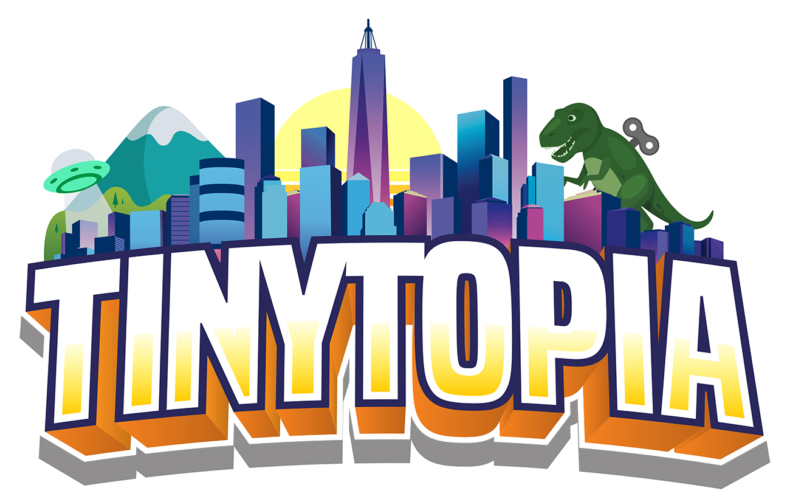 It’s not easy to create a fresh and exciting city builder. There’s no shortage of games where you build houses and ensure their residents have power and a place to work. So becoming the mayor in a standard urban environment just doesn’t cut the mustard anymore. Tinytopia doesn’t fall into this unimaginative trap, and has you creating a miniature toy town in a variety of wacky locations.

Tinytopia starts out simple enough. You’re given a simple grassy plain and a few roads, and need to place some houses, power stations and workplaces to satisfy the town folk. Before you know it you’ll have a happy tiny metropolis paying you taxes. Then you can either place more services (like hospitals and fire stations) to up your taxes or expand so more people move in. It’s a fairly familiar gameplay loop, but a compelling one nonetheless.

The first interesting mechanic doesn’t take long to make an appearance, and involves combining buildings. In Tinytopia you can stack buildings in all sorts of bizarre ways, and never get punished for it. Buildings can go on top of each other, and even if they fall off due to poor planning, they’ll still operate as normal. If you really want to get the most out of taxpayer money you’ll want to stack buildings in a way that combines them, improving their effectiveness. 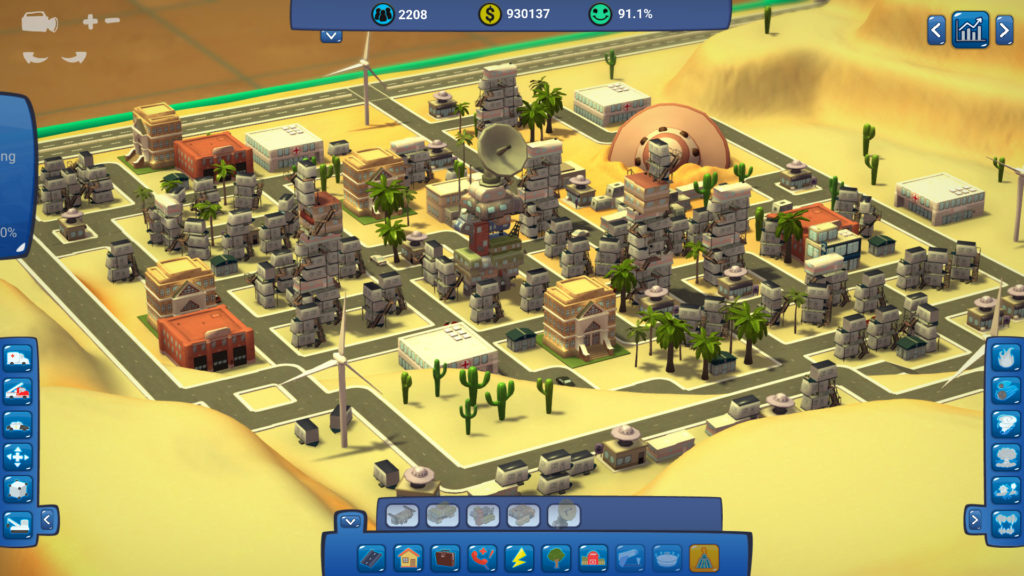 Each building combines in a different way, and for the simpler structures you’ll be told exactly how to start the fusion. One of the first upgrades you’ll discover is a skyscraper made out of two blocks of flats and a house pilled on top of each other. It’s fun experimenting to see how different creations snap together. For example, one stage only offers caravans for housing. But you can combine them vertically to create a huge stack or on the ground to make a extra long property on wheels.

Take out the frustration

At its core, Tinytopia is focused on entirely minimising any frustration building a town can bring. Obviously the lack of punishment for having an upside down hospital is part of this. But there’s also how the roads work. In most city builders I’ve played you need to connect all all buildings with roads. However, in Tinytopia if a road is vaguely nearby then you don’t have to worry. 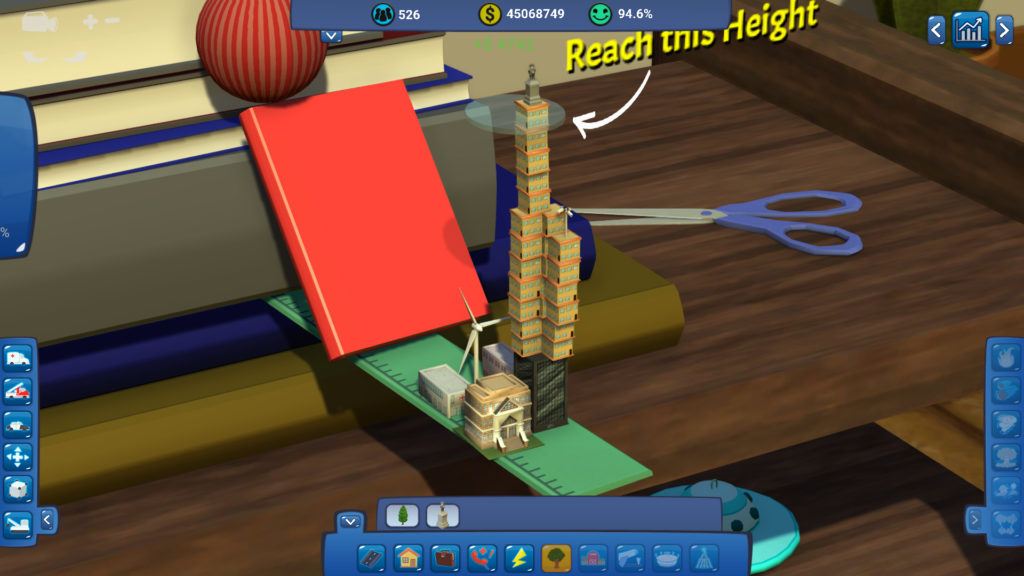 In the standard stages I was able to play in this preview, completing your main objective was pretty straightforward. Your main task is to complete building the mayor’s house. But unlocking each of the parts of this great manor will require you to have a certain number of happy citizens. With a bit of hard work and clicking you’ll manage this in no time. Then you’ll be able to accomplish your slightly selfish goals. There are bonus objectives too if you want to be a completionist. These will see you creating the perfect town and discovering new impressive combined buildings.

As fun as these standard stages are, the wacky toy-based challenges are where the real magic happens. The first of these I got to play featured a very small platform to build my town on. On top of this there was an objective to stack the town to a certain height to win. To manage this while also creating a working city was a bit of a challenge. But eventually I had a ridiculous pile of houses and fire stations that scored me the victory. 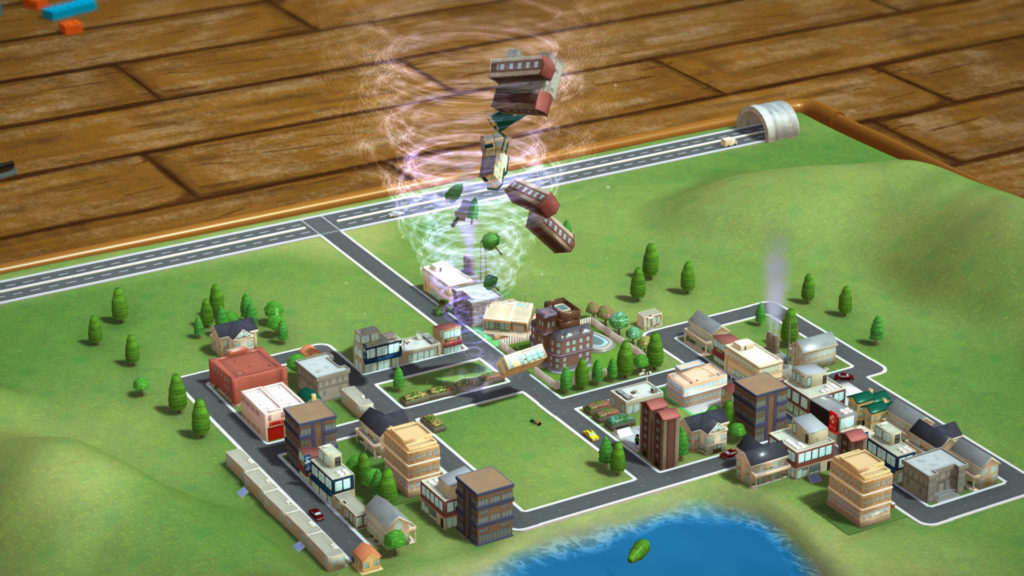 The second outlandish stage was the highlight of the entire preview build. This time the city had to be built on a see-saw, with certain doom facing your citizens if you didn’t balance the buildings perfectly. In a genre that’s generally more po-faced, the playful elements of Tinytopia are incredibly refreshing.

One of the few aspects of the game I can’t really comment on so far is the difficulty. From the early stages I never really had chance to feel challenged by the objectives given to me, and beating a level felt more like an inevitability than an accomplishment. This could very likely change as you progress further in the game though, and the lack of difficulty never made it feel particularly boring.

Although I only got to play through a handful of stages of Tinytopia, I discovered there’s a lot to love about this miniature city builder. The playful gameplay rewards experimentation, and the more outlandish stages are especially entertaining. If Tinytopia continues to embrace the lighter side of building a town, the full release will be something special.

Tinytopia is coming to Steam at some point this Summer.