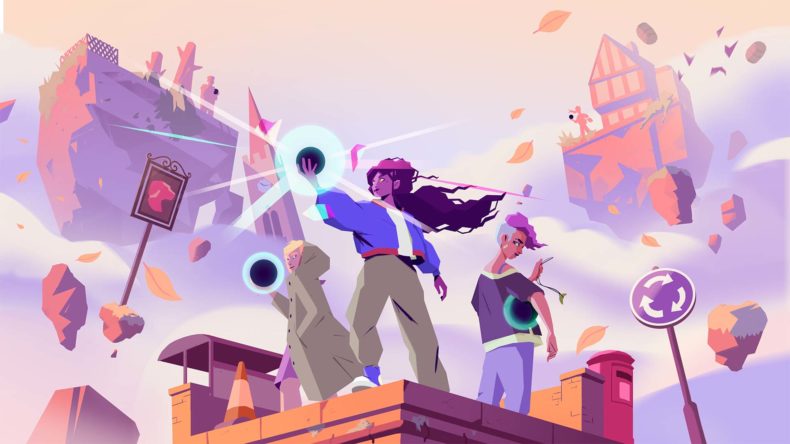 Desta: The Memories Between is a name you may not have heard, but it’s a new game, it’s out now… and it’s on Netflix.

From developer ustwo games, the team behind the phenomenal Monument Valley series, Desta: The Memories Between is a “character-driven rogue-like, featuring an immersive story, strategic turn-based tactics, as well as dodgeball action. Through unique gameplay and unforgettable experiences, the game explores themes such as self-reflection, loss, regret, and identity – through the eyes of ustwo games’ first non-binary protagonist Desta”.

If you’ve got a Netflix subscription, you can play the game on either iOS or Android devices, while a PC and console roadmap is planned to be announced in the next few months.

Desta’s story also touches on gender identity, sexuality and queer friendships/relationships. And although some of the subject matter is difficult at times the key takeaways are positive and joyful.

Every night, Desta falls into the mysterious dream world, filled with shattered remnants of locations past, memories of old friends and influences, and glowing orbs that give Desta the power to change the course of events.

The only way to progress is to play the mysterious ball game and dig deeper into Desta’s inner dreams and memories in search of the right words to say. Shoot spirited trick shots, team up with a diverse group of characters, adapt your strategy and unlock new abilities to dig deeper into Desta’s subconscious mind and uncover their secrets.

Ustwo games says it’s the studio’s “deepest and most ambitious game yet, with all the heart and approachability that ustwo games is known for”. “This is an exciting new avenue for us, giving players the opportunity to grow and engage with Desta in a meaningful way over the coming months. We look forward to taking players even further into Desta’s dreams” said ustwo games Chief Creative Officer, Danny Gray.

There are new features still planned for this version, with weekly challenges, hard mode, new abilities & memorias, new characters and chapters, and “much much more” all in the works. Ustwo is donating 3% of the profits from the game to youth organisations as well, which is a lovely gesture, too.

Monument Valley is coming to PC this July

Florence is an interactive story coming to iOS on February 14

Monument Valley could be getting its own LEGO set

Monument Valley soundtrack is getting a two-record vinyl release