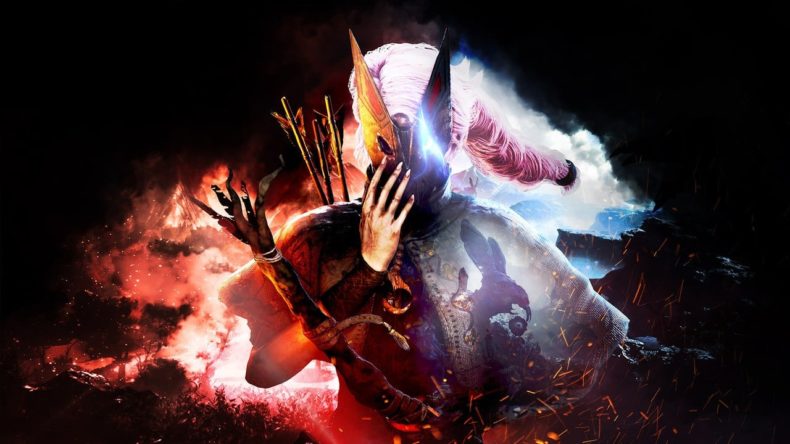 It took me a little while to get my head around what Blacktail actually is. Going in relatively blind, I was expecting a survival game, hunting with the signature bow and arrow, foraging for resources. While those things do feature, Blacktail is more like a slow-paced FPS, throwing you head-first into it’s weird and wonderful world of wizards and witchery.

Right away, the art style attracted me. It’s like a first-person Kena: Bridge of Spirits, all bright colours and beautiful scenery that can descend without warning into an almost unsettling fairytale darkness. The preview build doesn’t give much away in terms of story, though it’s based primarily on Slavic folklore. You play as Yaga, a young witch seeking her missing sister, Zora. It’s a fantasy world of talking mushrooms and living objects, occasionally putting me strongly in mind of Lewis Carroll’s Wonderland.

In fact, the Wonderland allusions seem deliberate. There are heart and rabbit motifs everywhere, and the voice that urges you on has a hint of Red Queen about it. This guide is as cruel as it is helpful, speaking in anachronistic slang that I presume is a deliberate choice to suggest timelessness and omniscience. It guides you on through the adventure, reminding you often of an unknown horror called BABA, sewing doubt in your mind that you’ll ever find Zora. 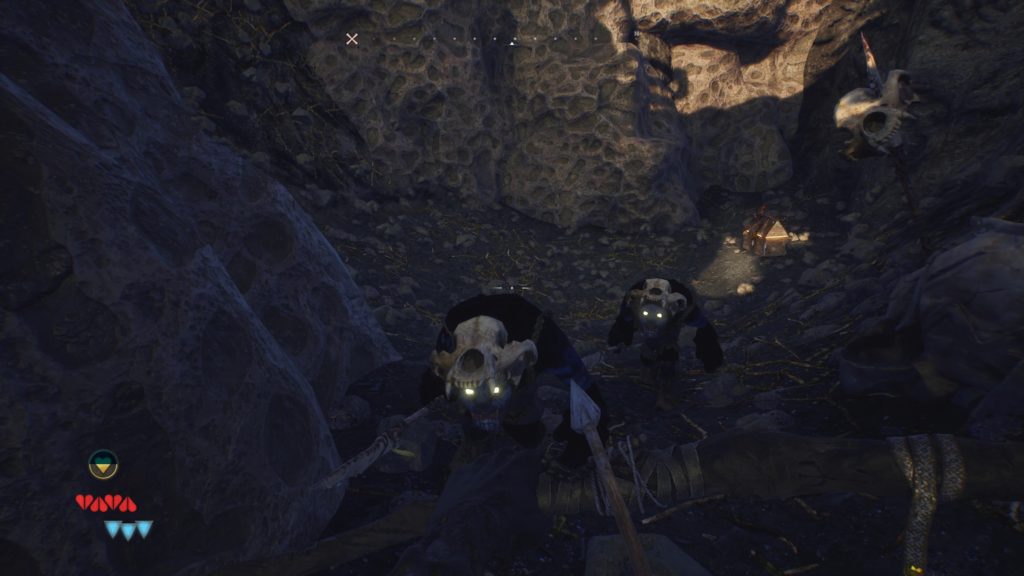 The gameplay is all first-person, and sees you gathering materials to craft a supply of arrows, antidotes and healing potions. Periodically you’ll find campfires where you can cook meat to heal yourself, and you’ll often find them frequented by a black cat. These felines act as fast travel points that return you to the Hut, a dark place humming with black magic that contains the Cauldron, the ancient artefact by which you improve Yaga’s skills and abilities.

Blacktail has an interesting upgrade system that requires you to gather all manner of ingredients to drop into the cauldron. Instead of levelling skills, you mix witchy concoctions that grant you new abilities. The skill tree is fairly expansive, offering multiple paths to improve bow skills, survivability, and magic. A force-push type spell allows you to deflect damage and break barriers, which can also be upgraded with different utilities.

I only saw one other weapon during the preview build, when I unlocked the witch’s broom. While you’d expect this to be some form of vehicle, it actually works as a lure that pulls monsters to it and then releases a devastating shockwave. It’s interesting, reinforcing the idea that Yaga is more survivalist than outright warrior. 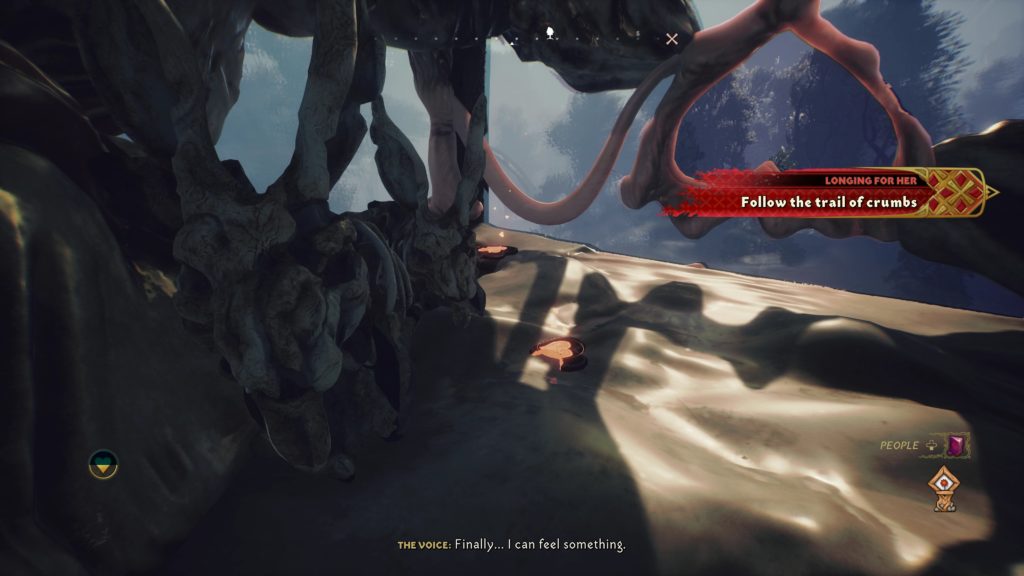 Add to this the morality system and there’s huge potential for emergent gameplay in Blacktail’s open world. For instance, you need feathers to craft arrows. Sometimes you can find them on the ground, which is fine; other times you might be forced to shoot a bird dead and take them. That’s a simple example, granted, but it demonstrates the kind of moral choices you’re faced with constantly.

The small section of story I played through hinted at further moral quandaries. I met a huge pair of talking mushrooms, who advised me to seek help from two others of their kind, Knight and Rebel. When I eventually found Knight, he urged me to find and kill Rebel, which I did in due course. However, I have a strong feeling that this could go the other way.

When I finally tracked Rebel to his cave, I was immediately thrown into a boss fight, which was the first time I saw the cracks in Blacktail’s facade and was reminded that this was just a preview build. Combat up to then had been slow, methodical; taking out burrowing trolls and floating Will o’ Wisps. Now faced with a mobile opponent employing multiple attacks, I struggled. Yaga’s dodge is nowhere near quick enough, and aiming and charging arrows requires accuracy not easily afforded in a life-or-death battle. She also can’t take many hits, meaning I died a few times when Rebel cast an area-of-effect attack that rendered me unable to move, and killed me in one shot. 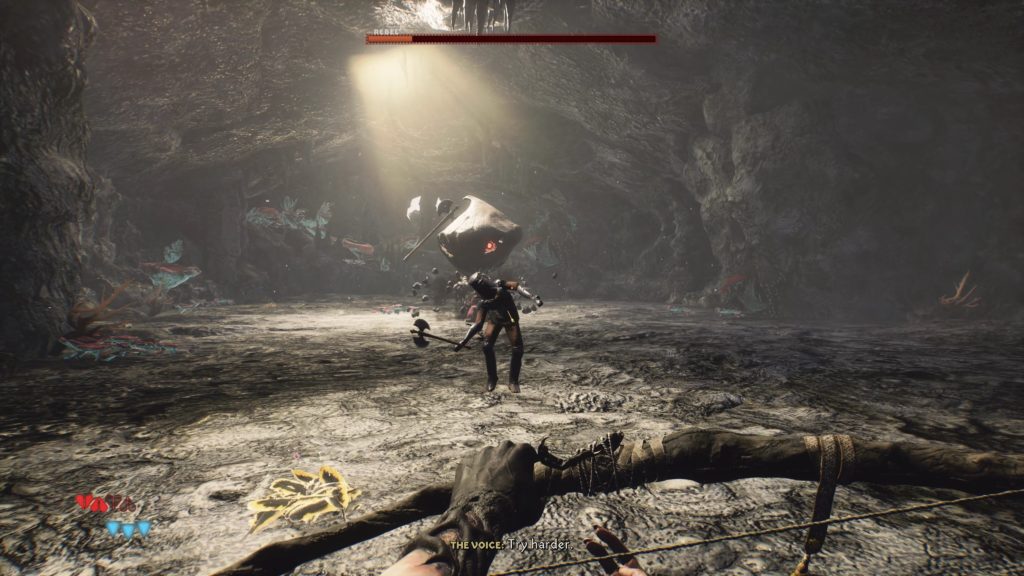 In the end I dropped the difficulty to story and killed Rebel in four hits. There’s definitely some balancing needed here, which will no doubt come before the full release.

As it stands, Blacktail is an interesting adventure. The world is gorgeous, the writing and voice acting very decent, and what I’ve seen hints at some very intriguing world building. The morality and skill system promise diversity and variance, which is important in an open world game with this level of ambition. From what I’ve seen, developer The Parasight could have an unexpected hit on their hands.

Senior Content Editor Mick has been playing games for over 30 years and writing about them for around 12. After drifting from site to site for a while, settling briefly at the now-defunct Made2Game and freelancing for the gone-but-not-forgotten NintendoGamer Magazine, he came at last to rest at Godisageek. Mick has been a reviewer, staff writer and content editor here for some time, while also moonlighting a little for Red Bull Games. He has 4 kids, has written 2 novels, and sometimes even manages to pay a bill or two. You'll usually find him defending the galaxy in Destiny 2, battling evil in Diablo 3, or lurking in the background on Twitter. Find him there @Jedi_Beats_Tank, or on XBL (JediWaster247), PSN (Jedi_Waster) or Nintendo (JediWaster).
MORE LIKE THIS
featFocus EntertainmentFPSShooter