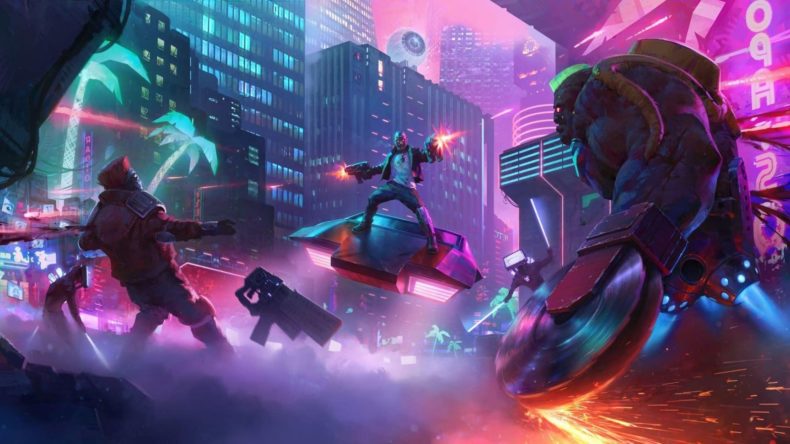 If you’ve ever played a boomer shooter and thought to yourself “This shit’s way too slow, how do I dial it up?” then Turbo Overkill is probably the game you’re looking for, you freaking psycho. It’s a game about going really, really fast, all the time, mowing down enemies with a variety of weapons and your chainsaw leg. Oh, yeah, did I mention? You have a chainsaw in your leg.

And no, that’s not a metaphor for anything. There’s a chainsaw, and it’s inside your leg. As cybernetically enhanced gunman, Johnny Turbo, your mission is to assault the cyberpunk city of Paradise and eradicate the SYN virus that infected its every mainframe, automaton, and citizen. Obviously the best cure for this kind of virus is to shoot the ever-loving balls off everything that moves as quickly possible.

Mr Turbo, Esq. Isn’t the most patient nor precise of cyber-psychos, either, so to facilitate the fact that seven out of ten shots fired will likely miss, he’s also outfitted with a growing suite of enhancements, from the aforementioned chainsaw leg to a grappling hook, double jump, and wrist-mounted rocket-launcher. 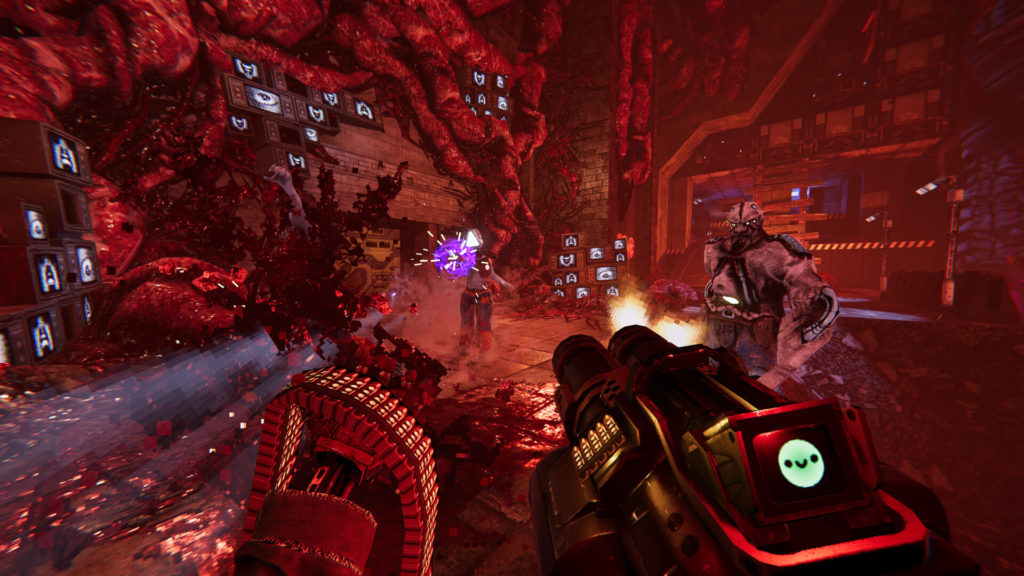 Levels are blocky, winding, drenched in neon and populated by a menagerie of enemies that constantly force you to cycle weapons on-the-fly. You just can’t stand still for more than a heartbeat; enemies shoot at you, charge at you, ram you and swoop into you from above. Hitting Left Shift while moving activates Johnny’s chainsaw slide, and will dice anything in his path to mincemeat. There are few things in any shooter this year that feel more satisfying. Later, there are several levels based almost exclusively around the mechanic, and you’ll be grinding through enemies like Tony Hawks on a really bad day.

Weapons run the standard boomer shooter gamut of pistol, shottie, twin SMGs, super shottie, minigun, but each has a secondary fire mode you unlock as you progress. Upgrade kiosks and weapon booths allow you to modify your guns, improve Johnny’s abilities, and upgrade his cyber enhancements. Sometimes enemies will explode in showers of gold coins as well as blood and gore, which you can spend on short term boosts, or ammo and health refills. 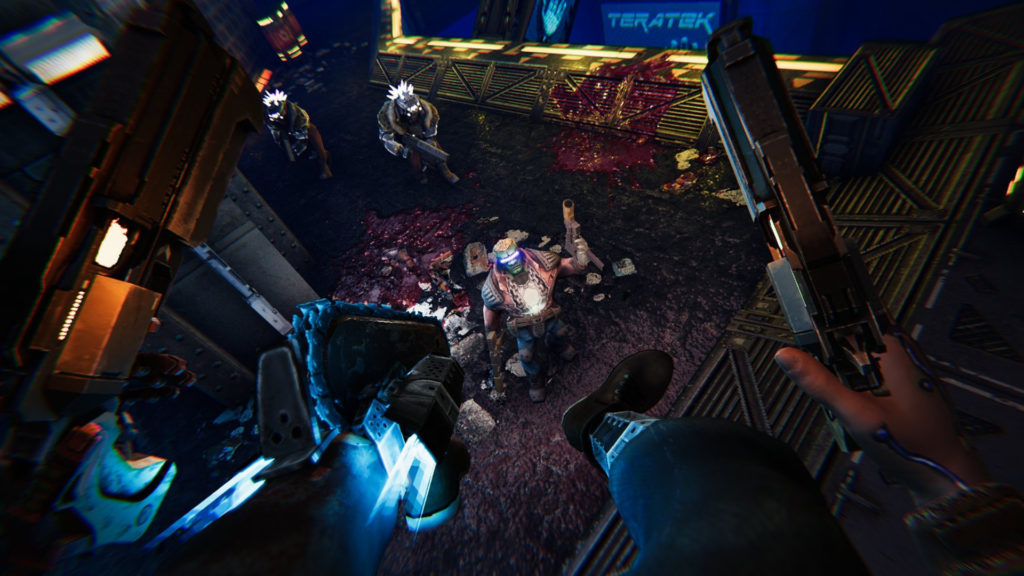 As is common for the genre, level progress is gated by locked doors that require specific keys to unlock. Why corporations of the future insist on colour-coding doors and then placing the keys for them eight blocks away is beyond me, but boomer shooters gotta boomer shooter. There are occasional extra obstacles to overcome, but it’s rarely more sophisticated than removing a physical boundary to proceed.

Everything about Turbo Overkill is built around moving quickly. There are enemies that swarm you in groups and if you don’t chainsaw the legs out from under the little shits fast they will overwhelm you in seconds. Likewise, there are big beefy fellas who will kill you in a single hit, or groups of ranged assailants who bombard you from the relatively safe distance of not-right-in-front-of-your-chainsaw-leg. Death drops you back to a checkpoint and the game reloads super fast, but it’s still annoying. 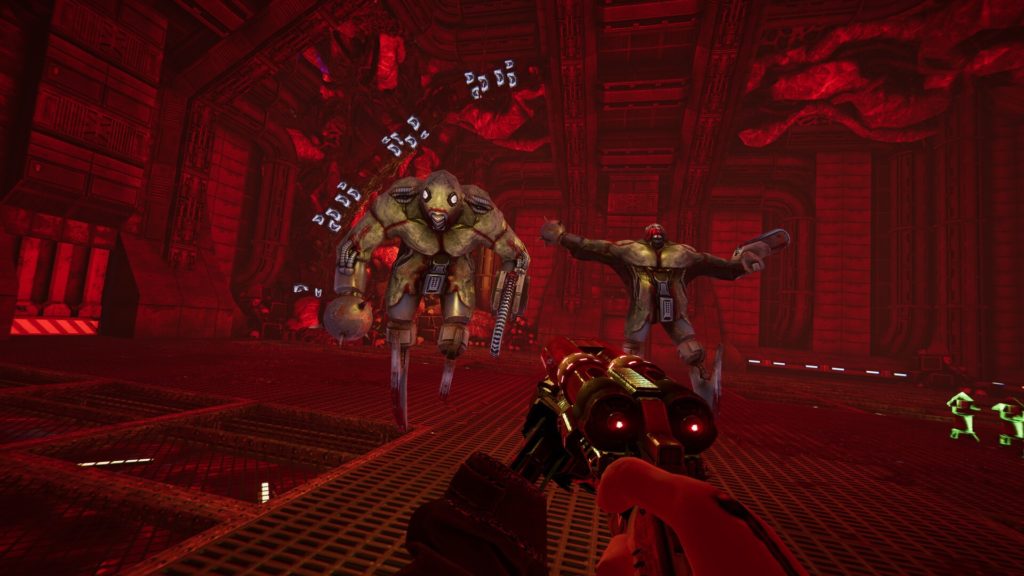 There’s almost no real balancing in terms of damage. I died as much on a higher difficulty as on the default one, because death usually comes not from enemy difficulty but from you forgetting to never stop moving. The synth-y cyberpunk soundtrack facilitates the pace of gameplay, always pounding away in your ear.

Although Turbo Overkill is currently only in early access, it doesn’t feel unfinished. More weapons and levels may be added later, but there’s little to fix in terms of gameplay. What’s here is complete, and the only area that really needs attention is the damage balancing. Seriously, there are little dudes with TV sets for heads and blades for arms that will kill you in less than a full second if they surround you. If it wasn’t for a mostly lenient checkpoint system, Turbo Overkill could easily become very frustrating instead of just challenging.

If you like your old school shooters with more bang than brains, Turbo Overkill is the one for you. Although, that’s not to say it doesn’t have the smarts – the suite of cyber-gizmos at your disposal makes each level a mini playground once you’ve unlocked them all. The difference is that Turbo Overkill doesn’t care how you get the job done, as long you make a hell of a mess while you’re doing it.

Senior Content Editor Mick has been playing games for over 30 years and writing about them for around 12. After drifting from site to site for a while, settling briefly at the now-defunct Made2Game and freelancing for the gone-but-not-forgotten NintendoGamer Magazine, he came at last to rest at Godisageek. Mick has been a reviewer, staff writer and content editor here for some time, while also moonlighting a little for Red Bull Games. He has 4 kids, has written 2 novels, and sometimes even manages to pay a bill or two. You'll usually find him defending the galaxy in Destiny 2, battling evil in Diablo 3, or lurking in the background on Twitter. Find him there @Jedi_Beats_Tank, or on XBL (JediWaster247), PSN (Jedi_Waster) or Nintendo (JediWaster).
MORE LIKE THIS
boomer shooterCyberpunkfeatFPS