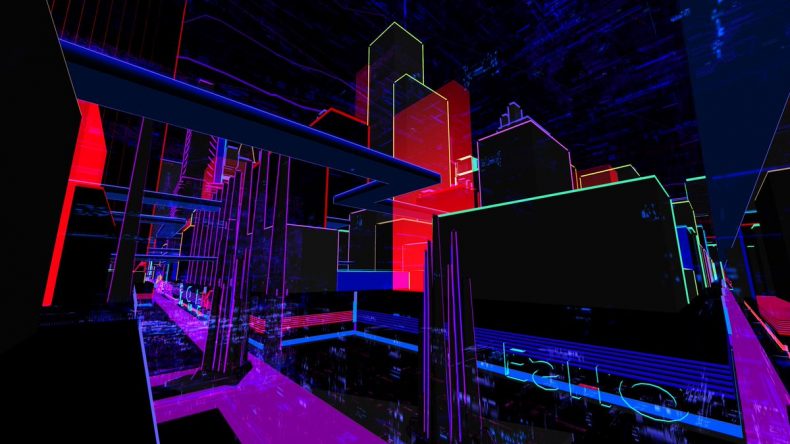 0°N 0°W, or “zero north zero west” being the easier way of referring to it, is a strange game. To preface, I’m the first person to defend the stance that games are art in that it’s an interactive medium for expressing the creator’s vision. That’s what 0°N 0°W is, an artistic game. It is an abstract piece of art that tells a story in its own way and through its own forms. This is likely where many people switch off from the idea, but there’s definitely something here for those who appreciate a change of pace and scenery – if you like your scenery to be attacking your visual senses.

The game begins with you jumping into a car, followed by scenes of a busy city rushing by as you embark on your journey. Flashes of ‘glitches’ appear and the audio becomes discordant. After a few minutes you’re stood outside your car at an old, run-down gas station. The world has become a dark, muted place of purple and blue hues, and a single light in the distance marks your way into a theatre. At the back of the theatre is a door from which a brilliant white light shines, and thus your journey through the myriad of colours and psychedelia begins. Each “world” you visit is an insane mash-up of colours, shapes, and sounds. It’s as if you’re stepping into the Matrix, if the Matrix was an exhibition at the Tate Modern. The goal, so far as I could ascertain, was to find a door and go through it to the next dream-like world so that your sense can once again be assailed in unexpected ways.

The worlds are built up of simple geometries that is then given a makeover with shader effects and animations, giving each one a unique look. Vivid colours and bright neon glows accenting black geometries, monochromatic landscapes of almost pure white dotted sporadically with greys and blacks, muted pastel hues on a light backdrop, and everything in between that mixes and distorts the world around you.

Whether the game is trying to portray a message of deeper meaning and make us consider the state of the world or our lives, I cannot tell for sure. I did draw parallels between 0°N 0°W and parts of my own life – the chaos, the blinding colours, the dark moods, and then finding that brightly lit door at the end of the level. I cannot say with absolute certainty if this was the developers’ intention, but if there’s anything to be said about art in general – especially abstract art – it’s that you make your own interpretations of what’s shown. Mechanically this is a very straightforward game. You can walk, sprint, jump, and that’s about all there is to it. There’s not a great deal else that you, the observer, can do within the world other than explore and lose yourself. Often the latter is quite literal as you search for the coveted doorway. While I dislike the term, ‘walking simulator’ would be the best description for 0°N 0°W and what you’re doing within the game itself. It’s an exploration within an abstract world.

For the average player, this game will likely fail to offer any sense of achievement or much entertainment value. I found myself becoming somewhat introspective throughout the experience – and it is most definitely an experience – even if that wasn’t the intended effect. It was also quite difficult to play for more than 30 minutes to an hour at a time because of the bright, flashing colours and vivid visuals. The epilepsy warning at the beginning of the game is not one to be taken lightly, because even for someone like myself who is very resilient to these kinds of visuals, it did become a challenge after a time.

Even though I was limited to short bursts of time playing and the constant sense of listlessness throughout my time in it, I also found a sense of piece within the riot of geometries. Each new level presented a different set of colours and landscapes, but always among the chaos was an overarching feeling that no matter how difficult the world looks to navigate, there is an exit and I have all that I need to reach it. This is where my own introspection really led me and that’s as much of a surprise as anything. I started out this game somewhat sceptically, but for it to invoke this sense of reflection was a welcomed twist.

Although there isn't a lot to it, its chaotic neon visuals and sense of introspection make it a worthwhile experience.