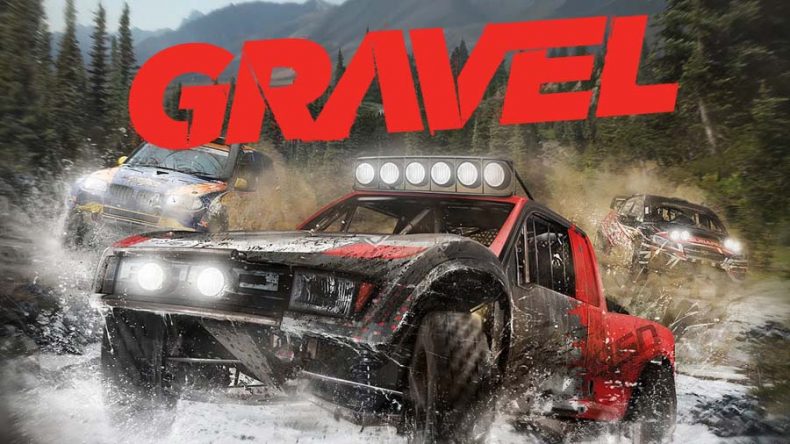 Most racing games today are split between two types: po-faced simulation or pure arcade romps. Also, sorry for using the word “romps”. There is a third type, seen so rarely that it’s almost always a welcome surprise. That third type encompasses games like Project Gotham Racing, the Grid series and even Motorstorm to a degree. These games often use real cars and tracks, and even real-world physics, but they’re often more exaggerated so it’s easier to drift or you can jump off unrealistically high ramps and land without shattering both your suspension and the soft, squidgy human inside the vehicle. I rather like this third form of racing games, so it’s nice to see that Gravel slots into that niche quite nicely.

It starts off with an incredibly cringe-inducing intro video, featuring real men (by that I mean they’re not CGI) acting all tough in front of a camera, introduced as the ‘Off-Road Masters’ against whom you’ll be competing at various points throughout Gravel’s campaign. This leads into some exceptionally generic guitar riffs and metal, because you can’t have off-road racing without a bit of metal or rock music, can you? It’s basically the official soundtrack to any ‘extreme’ racing discipline. Honestly, I was beginning to get flashbacks of that awful Flat Out game from last year. Luckily, Gravel’s gameplay is far, far better than that. It drops you into your first race with a little fanfare, as the strangely British announcer (let’s face it, it’s usually proper American frat boys that’d be shouting their way through intros and whatnot, for games like this) tries his hardest to get you pumped up for a race at the beach. There are fireworks and, erm, let’s say “adoring” fans, because they’re totally not the usual badly textured, poorly animated, cut-and-paste people at all. Nope. Can you tell I’m being sarcastic? Does it show? Anyway, when the race actually begins, it’s hard not to be drawn right into the fun, frantic battle for first place.

During the course of your time with Gravel and its Off-Road Masters campaign, you’ll go through events such as checkpoint races, which are much like the point-to-point off-road races in the Forza Horizon series; lap races, racing against the AI around set courses, sometimes real Rallycross circuits; time attack, which is much like general rallying, as you attempt to post the fastest time on a solo run; and even the new mode, smash-up, which I’ll get to in a minute, because it’s a little more complicated to explain in one line. You’ll earn XP and stars during each event, which essentially translate to new cars/liveries and career progress respectively. There are several different car types to play with too, all licensed vehicles, from big utility vehicles to the fastest rally cars around. To be honest, aside from slight speed and handling differences, there’s not really much to tell them apart, handling-wise. Like I said though, this is more Project Gotham than Gran Turismo. Only on dirt tracks and stuff. Much like Project Gotham (only on dirt, I know), Gravel’s events take place on both real tracks and fictional ones, based on real locations. You’ll drive over dunes in Namibia one minute, then hit the mixed surfaces of Hell the next. No really, there’s a real Rallycross circuit called Hell; it’s in Norway. Again, much like PGR, Gravel offers Kudos-like points for things like drifts, jumps and high speeds, and chaining them together ups the multiplier for higher rewards. At the end of each event, these points will transfer to XP, with more added based on where you finished and things like difficulty and assist usage. Levelling up gains you new cars and liveries, nothing more.

The real progress is in the stars you earn, given out at the end of every event. With a maximum of three per stage, you’ll earn three for a win, two for a predetermined lower place (starting with fifth and moving up to third, as you progress) and one for simply finishing the race. This means that you’ll be able to progress almost all the time, likely being able to gain access to every event with minimal fuss. It doesn’t penalise you for playing on a lower difficulty either, so if you find an event too difficult you can knock the AI down a peg and try again. You might have to in some cases, as I did notice one or two spikes when suddenly the AI would just not make mistakes and I couldn’t catch them no matter what I did. This is particularly of note during against-the-clock events, where even on the easiest difficulty the AI’s times were sometimes unreasonably fast. The worst example of this would be in the smash-up events. Thes are essentially checkpoint races, except the checkpoint gates are replaced by a number of screens. These screens will randomly display either a green arrow or a red X, only appearing as you approach, and you need to hit a green arrow in order to keep going at speed; hitting a red X will slow you down substantially. It’s a really interesting idea, but with the already unpredictable nature of driving on slippery, bumpy off-road surfaces, you’ll almost always hit a red X at some point because you’ll be in a high speed slide and the green arrow will appear on the opposite side of the corner; you’ll have no chance of hitting it and your race will probably be ruined there and then. Sometimes it’ll be your mistake and that’s something I can accept, but often the AI times posted must be flawless because I’d get nowhere close despite only hitting one X. Luckily, the star-based progression system is so well balanced that you’ll still be able to move onto later events regardless.

Every event looks pretty nice, thanks to Gravel’s impressive lighting effects and decent car models. The locales are varied and have some nice details thrown in, often feeling a bit like Forza Horizon 3’s biggest off-road races, even if Gravel doesn’t pack anywhere near the graphical punch of the Xbox giant, sometimes chugging a little in busy areas. There are loads of places to go though, each with various track layouts and weather patterns (Mont Blanc’s snowstorms are deadly), so even when you’re done with the lengthy campaign you’ll still have loads of cars and tracks to enjoy in Free Play and online modes. There are weekly events as well, much like Milestone’s WRC series, in which you can earn XP bonuses by beating times on set tracks. It’s quite the package.

It’s hard not to enjoy the spectacle of Gravel’s off-road mayhem, thanks to some simple driving controls and exaggerated physics, alongside the well-designed locations and challenging AI (even if it’s sometimes a little unfairly challenging). While it won’t trouble the likes of Forza Horizon 3 or Dirt 4, that doesn’t mean you can’t enjoy Gravel alongside them.

Despite one or two cruel difficulty spikes, Gravel is one of the better examples of off-road racing in a while. Its mix of semi-realism and over-the-top arcade style makes for some exciting races, while its progression system keeps it accessible to almost anyone.

Gravel will be trying to reignite the spark of old, arcade racers when it releases