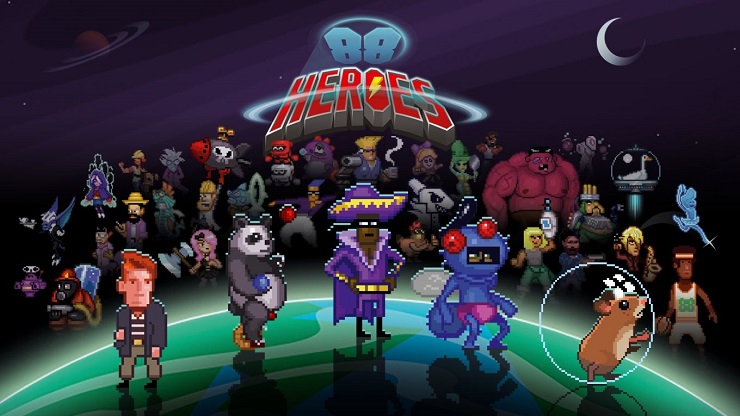 They say three’s the magic number, but in 88 Heroes the number 88 is king. You have 88 seconds to complete a room, 88 minutes to complete the game, 88 coins to collect to revive fallen heroes, 88 rooms and, you’ve guessed it, 88 heroes.

88 Heroes is a colourful, bombastic, chaotic 2D platformer brimming with charm and humour which is, crucially, really fun to play. You have an army of 88 different characters at your disposal to get through to completion and save the world from the dastardly (yet constantly amusing) Dr. H8, and when they die they’re gone. The heroes are where a lot of 88 Heroes’ humour stems from, with funny call backs to games gone by with the likes of Low-Res Reggie and Retro Snake, to popular culture references with the Teenage-Mutant Ninja Armadillos and Double Oh 88, to some utterly pointless ones like Glass Girl who shatters after a single jump, Deiter Nate who carries a primed bomb around with him and MK Twice, two buddy cops who just wind up shooting each other.

All of the heroes are cooly designed, have funny catch phrases and their own unique skill. With many of them move in original and interesting ways. Some flying heroes allow you to pretty much skip entire levels by just hovering over all the danger while other heroes find it hard to get through certain tight spaces. From a colossus to a flea, every base is covered, there’s even a sarcy question mark and Rick Astley! Some of my personal favourites are Dr. Headhunter, a mind controlling bug that lets you take control of enemies, Batbot, who speaks in a menacing tone and can slow down time, and Disco the Dog, a proper cute dog that can throw his own frisbee.

88 Heroes is unforgiving, all it takes is one hit from an enemy sword or bullet and the hero will explode in a cloud of confetti and will be rendered obsolete. Which, even though that is the crux of the game and it is a compelling one, means you can never get too familiar with any one hero. It’s good in a sense as it keeps the game challenging and forces you to adapt to different scenarios, like the directions being opposite (a panda on a unicycle called Wang Wei) or only being able to move by jumping, and sometime the rooms won’t be best suited for the abilities you have. But only being able to use a character for, the absolute maximum, 88 seconds at a time and usually a lot less means you never get used to the platforming in 88 heroes.

Not to mention that some of the characters that are mostly there for a joke and don’t offer much in terms of offence, like Milton, the Armadillo who only eats pizza, soon become annoying to play as when the joke wears off.

The hero that I have the biggest issue with, however, is Miss Fortune. Her gimmick is quite a novel one: where most characters have a melee or missile like attack, Miss Fortune flips a coin. Heads she goes straight to the finish, tails and she dies. Sounds pretty cool right? And getting her when you’re stuck on a room can be a god send. But her fortune does become a problem in boss fights. I got to my first boss fight at room 20, an easy affair when you take cover to avoid a big robots attacks then jump on a button to shoot rockets at it, but since Miss Fortune was the only character I had left I flipped the coin and hey presto! It came up heads, the boss was defeated and I was ready to move on, or so I thought. Instead my boss battle was restarted and then I was stuck in a vicious loop. Heads I’d win and it’d restart, lose I’d die then have to choose to quit or retry. Eventually I had no choice but to quit and start from the beginning, so Miss Fortune did seem a little game breaking. I was also a little disappointed that I was given the option retry, too. I was out of heroes so that should have just been game over, you gotta follow through on the premise!

A word has to be given to 88 Heroes’ great music. For these type of games, in which you’re constantly dying and having to listen to the same tune for ages, it’s important for it not be mind numbingly boring after five minutes. Not only does 88 Heroes achieve this, but its retro music is quite a toe tapper!

So that’s 88 Heroes, a fun platformer with lots of humour and enough originality to set itself apart itself apart with enough challenge to keep things entertaining. If you’re looking for a spot of platforming, you’d do worse than 88 Heroes.

88 Heroes is a fun, chaotic platformer where 88 is king. You have 88 minutes to complete 88 rooms, you have 88 seconds to complete each room and have an army of 88 characters to play with. With a lot of unique and funny heroes on offer, 88 Heroes is a nice bit of platforming goodness.

Competition: Win 1 of 5 copies of 88 Heroes for either PC, Xbox One or PlayStation 4