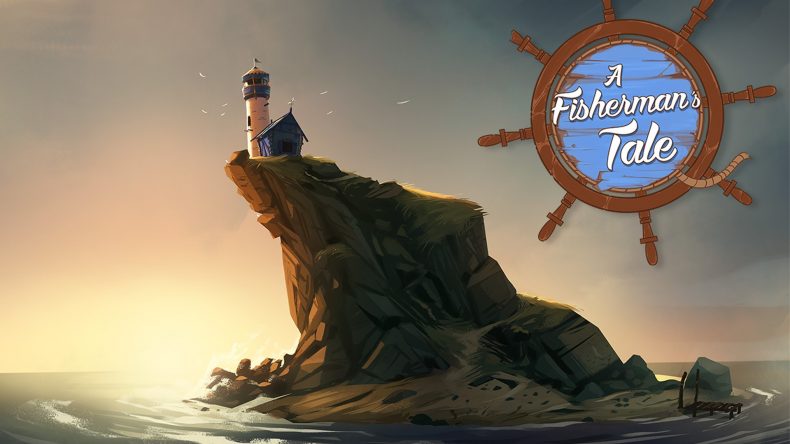 Although A Fisherman’s Tale isn’t particularly long, there’re some of the finest physics-based puzzles I’ve ever seen in a game, let alone a VR title. It pushes your brain as hard as it can, constantly struggling to work out what to do and how to do it, but inevitably the click comes around, and you suddenly get it. Many puzzlers try too hard to confuse and stump you, to the point where it’s nigh on impossible to work out what you’re supposed to do, but the gratification you get from solving the many mind-bending conundrums not only feels great, but you totally appreciate how clever they are.

It’s rather tricky to try and explain what’s going on in A Fisherman’s Tale, but I’ll have a bash. You are a puppet fisherman living in a model lighthouse, where your human counterpart exists above you, mirroring everything you do. The main goal is to turn on the light at the top of the lighthouse to save any fishing ships nearby (as a huge storm is coming). The mysteries uncovered throughout tell a story that not only deals with the danger of bad weather on a rocky ocean, but one of a much personal nature regarding the relationship between a father and his son. In the first few chapters, your movement is mirrored in the model lighthouse, and if you look above you an even bigger version of yourself and the room also moves in sync with you. It’s hard to explain, but the puzzles require items from each version of the room to solve. You’ll be tasked with feeding a fish sardines, building your own ship, and fixing pipes that flood the lighthouse, to name a few, and the way in which you solve them requires some real thought, as well as plenty of patience.

Take the ‘pipes’ puzzle for example: there’s a small box with a pipe you can hold between your thumb and your index finger, but when you drop it into the model lighthouse, it falls from above you and becomes a bigger pipe that you can pick up and use to place into the piping mechanism. When you feed the fish sardines it asks for a bigger one, so you pick up a small one and drop it into the lighthouse again to have a much bigger one fall from above. You’ll also need to reach into the model lighthouse to pick up a captain’s hat, and grabbing it makes it shrink, but that’s good because it’s needed to put on a talking crab. The puzzles become much more extravagant, and the constant change in what’s needed and how to acquire it gets rather difficult to keep with, and the controls make it even more laborious. If you pick something up and try and turn, and the item gets stuck between you and a staircase or a wall, the item will drop and you must wait for it to respawn, which can take a few minutes. Movement is point and click/teleportation, so free movement is non-existent; having that freedom would make things much easier and less frustrating.

As things progress the narration can become tiresome, and hints don’t always activate so you’re often struggling to work out where to go, but not all puzzles are that difficult. There’s one puzzle towards the end where you must light three lanterns, and I almost gave up because of the controls, not because the puzzle was hard. You can reach further by pressing one of the buttons on the move controller, but it became too finicky, and I wanted to scream. It’s a shame because not every puzzle is that awkward or exasperating, but when the matchstick you’re trying to move around doesn’t move at all the way you want it to, A Fisherman’s Tale becomes awfully irritating.

The game is designed beautifully, and even though the visuals aren’t particularly great, what it does with your surroundings is rather special. There are cutscenes that tether each chapter together and, being a big pussycat when it comes to being afraid of the sea, I had to close my eyes when you find yourself underwater during a terrible storm. The story that unfolds becomes quite interesting, but as the game ends it all feels somewhat abrupt, and you’re suddenly watching the credits not entirely sure what A Fisherman’s Tale is trying to tell you.

Nonetheless, the physics-based puzzles of A Fisherman’s Tale are beyond smart, and the level design is wonderful. The music is subtle yet moving, and the whimsical story grows darker as the game progresses. I enjoyed it, but there were times when movement became uncomfortably frustrating. That being said, it’s still certainly a game I’d recommend.

Movement can be poor
Rather abrupt ending
Narration is frustrating

A Fisherman's Tale has some fantastic puzzles and great level design, but the movement manages to ruin some of the puzzles.

InnserSpace hits PS4, Xbox One, Switch, and PC on January 16