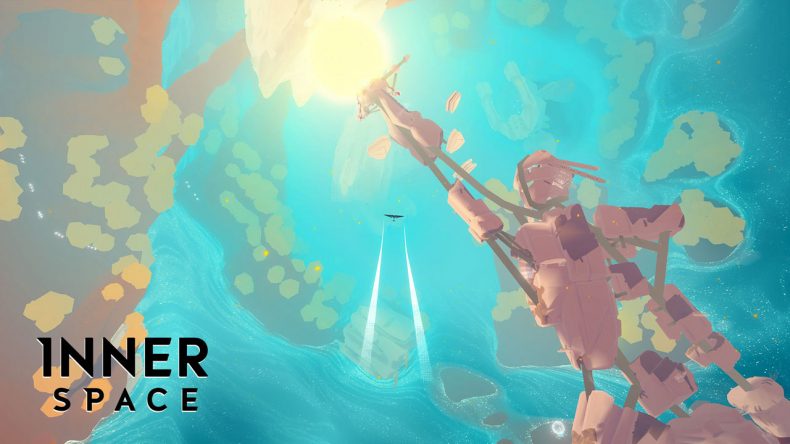 When I first heard of InnerSpace my immediate thoughts went to the 1980s movie featuring Dennis Quaid who is miniaturised in a military experiment and accidentally injected into the body of Martin Short’s character. Sadly, InnerSpace the game isn’t that at all, but rather a beautiful, serene game of exploration and flight that doesn’t quite hit the mark it sets out for itself.

InnerSpace has been a few years in the making having been successfully funded on Kickstarter back in 2014. It is a game about flight and discovery in a disorientating sequence of inverted spaces. It feels like a game very much in the same vein as Flower, or more recently, Abzu. You are the cartographer, a seemingly sentient flying vessel created by the archaeologist who for all intents and purposes appears to be a submarine. The archaeologist is on a mission to discover the secrets of an ancient race that once inhabited the worlds of the inverse and wielded a vague power called “wind”. Being a submarine is pretty limiting, so as the cartographer it is your job to fly around the spaces collecting relics of a lost past and remnants of wind to power them back up and help restore the memories of a civilisation long gone.

The relics you find contain hidden information about the world as well as providing upgrades to your ship in the form of a new chassis that gives you different abilities. The Piano frame that you get early on, for example will allow you to transition between flying in the air and submersing into the water via a small transformation, whereas the Zephyr Spark frame will allow you to fly much faster. Each frame is fairly unique and adds a small amount of variety to the way you traverse the world, but it seems that most of them are unlocked after a considerable amount of play time which all but renders them invalid.

The way that you traverse the inverse world of InnerSpace is nothing but disorientating. The spaces are circular in design and there is no sense of up or down. While flying around it feels very much like your surroundings are being viewed through a fish-eye lens and it is incredibly easy to lose track of where you need to go. Furthermore, if you accidentally clip your craft into an immovable object the screen shakes and your vehicle is cast off in whatever direction if feels like, resulting in a frustrating few moments to orientate yourself back on track again. In fact, much of my time in InnerSpace was frustrating as I tried to regain a sense of where I was and understand what on earth the game wanted me to puzzle out to proceed. The spaces within the inverse are beautiful with a lovely pastel colour palette and there is a sense of joy and freedom in the way your move your craft around it. Accompanying your flight is a gentle pleasant soundtrack that is, in the case of the Piano frame, often complemented by your movement in much the same way Flower incorporated music into the action. The serenity of what you are doing, however, is often punctuated by intrusive prompts that remind you of controls. This constant pop-up perfectly reflects where InnerSpace fails in its intent – it wants you to float about exploring, but it doesn’t seem to trust you to do it on your own. Furthermore, some of the level design feels really obtuse, so whereas you are constantly reminded of how to play, there is very little attention paid to helping you understand what it is you have to do. An early boss level had me flying around for what seemed like hours trying to understand how and what I needed to do to proceed. I eventually stumbled upon the solution, but none of it felt obvious, it was more of a happy accident.

InnerSpace is a peculiar game, it is clearly striving to generate an emotional resonance with the player through the story of the mysterious civilisation, and while the act of flying does manage to achieve this to a certain extent, overall the game just fails to connect. It feels hollow, hampered by the disorientation that the level design deliberately conveys and the poor signposting of what is required to proceed. Visually, it is very beautiful, and the audio design is superb, but beauty and sound are characteristics of this type of game and they aren’t enough on their own to carry InnerSpace to greatness.

InnerSpace is a visually stunning game that ultimately fails to connect. It wants the player to explore and uncover its secrets, but places them in an environment that is deliberately confusing to the point of frustration.

For Your Amusement – Layers of Fear