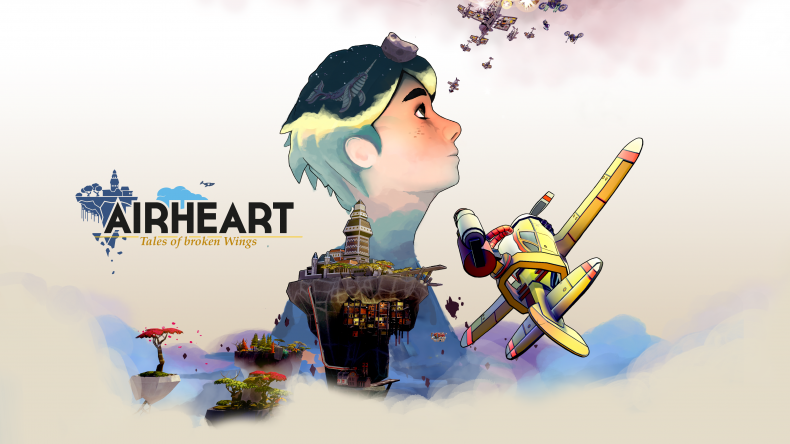 Phonetically speaking, Airheart is a name that conjures up images of brave women owning the skies and fighting against normality; casting off the shackles of society. So, it’s with these images in mind that players first jump into ‘Airheart: Tales of Broken Wings.’ We’re introduced to a magnificently crafted, vertical, world filled with floating rocks and flying fish which blurs the lines between steampunk fiction and reality, along with the game’s protagonist – Amelia, obviously – a skyfisher in this interestingly three-dimensional world.

When you first drop into Airheart, you’re presented with three options. ‘Hangar’, ‘Workbench’ and ‘Shop.’ Now, I know what you’re thinking, because I was thinking the exact same thing, “SHOP?!”, but fear not, it’s just the method that the players used to buy potential upgrades for their aircraft. I say “potential upgrades” too, as there doesn’t currently appear to be a way to compare an item that you want to buy, with something that’s currently fitted to your vehicle. This can – as occurred to me – result in the player using their hard-earned cash to purchase an items that turns out to be a downgrade. Leading to quite the annoyance. Thankfully, however, there’s no way for the user to purchase any of the game’s in-game currency using real-world transactions. So, with that panic over, I could delve into the game’s other areas; namely taking the default plane for a spin in that aforementioned beautifully crafted world.

The main gameplay when you’re out in the world revolves around catching fish and bringing them back to base to be sold in order to generate an income. This income is then used to upgrade your aircraft in an attempt to make it last longer out of the hangar, as you move up through the layers of the game to reach the stratosphere and attempt to take down the Skywhale. It’s explained early on that Amelia’s father once told her that great fame and riches would await the person who was able to capture the Skywhale, so that’s the target that she’s set her sights on; and that’s what you’re here to help her do. Capturing the fish is as simple as flying into them with your aircraft, however, the act of fishing in its entirety isn’t quite as simple as that. Firstly, each layer has a bar which indicates how much fish there is in the area. This gameplay mechanic forces the player to move up through the game’s levels in an effort to avoid overfishing in an area. If there’s nothing left to earn you money, there’s no point in being in that layer of the sky, so you’d be better off moving up into the more dangerous areas. More risk equals more money, right?

This is where the roguelike element of Airheart comes into play too. The higher up you go into the sky, the more money you can earn in order to upgrade your aircraft. However, the further up you go, the more dangerous it is too. This danger could result in you being attacked by pirates and being sent hurtling back towards the hangar with absolutely nothing to show for your troubles; aside from, perhaps, a bruised ego. Upgrading your aircraft allows you to stay in those upper areas for longer due to an increased level of survivability. Whether that’s because you’ve increased the armour of your plane, or increased the weapon strength. Either way, the aim is to farm the fish – without over-fishing – in each of the layers, bring them back to the hangar without getting destroyed and upgrade, upgrade, upgrade. The stratosphere, and the Skywhale, await.

While this area of the gameplay is well-crafted and well-executed, it does get tiresome rather quickly. It’s an essential aspect of the gameplay, but I did find myself resenting the necessity of going back out into the world to collect more items for selling. The crafting, however, never left me dreading having to use it; quite the opposite actually. The way that the crafting works is similar – in a sense – to Minecraft. You go out into the world and gather raw materials, then come back to the Workbench and put those raw materials together in specific orders and quantities in order to craft an item. When you first start the game, you don’t know ANY of the recipes and you’re going to have to play about with the system in a series of experiments in order to get anything useful out of it. In order to let the player know that they’ve got a material in the correct location to at least make SOMETHING, there’s a sequence of lights and symbols at the bottom of the screen. You’ve got the correct material, in the correct location, then the light lights up, if not, then it will tell you as such. This allows the player to swap out the material which didn’t work, for something else that might, and hope that the new material will result in something productive.

While the crafting allows for a massive amount of experimentation – and therefore fun – there are things which come to mind straight away as things which would have made it a little less frustrating. Firstly, there’s nothing resembling a Recipe Book for the player to refer to after they’ve managed to discover something new. This means that if they ever need to make it again in the future, they’re going to have to remember what they did in the first place. This, in a system which relies heavily on trial and error, could prove to be a little tricky. Secondly, after purchasing an item from the shop, and having its reverse-engineered breakdown available in the ‘Inventions’ tab, there’s no text to inform me what materials these are; just the pictures. This can easily lead to mistaking one image for another and wasting materials on something that fails to craft. This occured to me, mistaking the image of a Metal Pipe for that of Tin Foil. This resulted in me being forced back into the world to reacquire materials so correct a mistake that could have been easily avoided.

No upgrade comparison, resulting in accidental purchases
Confusing as to which fish earn the player money, and which don’t
Photo mode was buggy at the time of review. Max depth of field broken
Core gameplay starts to feel repetitive quickly

Airheart: Tales of Broken Wings is a game whose crafting mechanic is a lot more interesting than the rest of the gameplay. It doesn’t feel broken, it just feels like the flying gameplay is secondary to the inventive crafting.