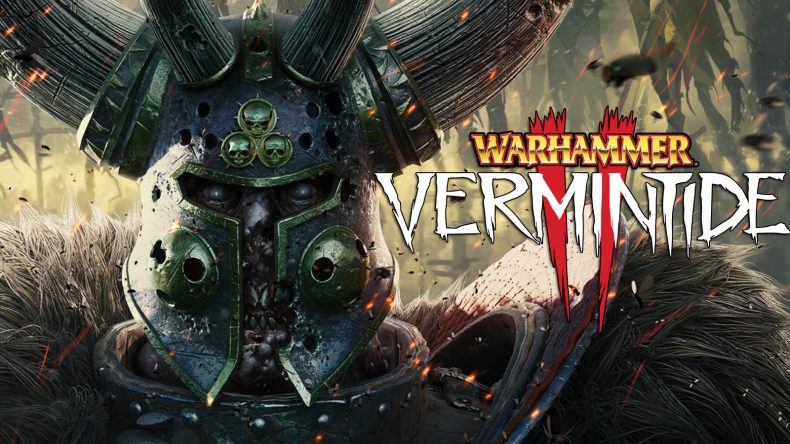 Warhammer: End Times – Vermintide, while a bit of a mouthful to say too many times in a row, was surprisingly digestible on release. Swapping hordes of zombies for Skaven rat-men, it aped Left 4 Dead just enough to be immensely playable while still retaining its own identity 100%. So much so, in fact, that no one even complained about how similar it was to Valve’s co-op zombie shooter. All we cared about was how damn good it was.

Dropping the tongue-twister title, Vermintide 2 has just made the jump from PC to consoles and, true to form, the result is essentially more of the same. Before you roll your eyes, remember that “more of the same” is par for the course in this particular sub-genre. The gameplay foundation is so solid that all you really need to do is build on it; add more of everything and make it bigger. In some ways, Vermintide 2 embraces this. The environments are more detailed and more varied, particle effects are sprayed everywhere with extreme prejudice, and the character models are wonderfully diverse. Graphically it’s close to stunning, even if there are occasional visual bugs and glitches that break the immersion. Loading times suffer, too, and I found myself routinely waiting for upwards of 60 to 90 seconds to get into match.

The same “bigger is better” rule largely applies to the overall gameplay, in that levels feel massive both in scale and length. There are issues though, whether played online or off. In the latter, the AI is very inconsistent, meaning when you’re seized or pinned by one of the unique enemy types and no one is around, you’re probably as good as dead. The AI, if it’s too far away, will either ignore you or struggle to make it back to you in time. That being said, there were several times online when I spawned in so far away from the rest of the team that I was unable to catch up to them and was eventually killed dead while I waited to be saved. Whether on or offline you’ll begin by selecting from one of the five playable characters (it would have been nice to see a sixth face join the line-up, but the five existing avatars are cool enough to suffice), and dropping into the hub. The tavern from the first game has been replaced by a tumbledown old keep where the resistance plot to overthrow the Skaven menace that have taken over the land, but the premise remains the same.

From here you’re able to tweak your loadout by changing your equipped weapon, activating trinkets and charms, and changing your character skin (once they’re unlocked, of course). You can also partake of daily challenges to earn loot boxes, or simply dive into a mission. It’s not always a guarantee that you’ll be allowed your first choice of character, which can be frustrating. Unlike Left 4 Dead, the different avatars here have wildly different skills and gear, so while the core ranged or melee mechanics remain similar, you will sometimes be forced to make do with a character you don’t like while someone else runs your main. Missions, too, follow the same template as the previous game. You’ll usually be asked to fight your way through an area, using potions of Speed, Strength and Concentration to bolster your chances, until you reach the crescendo event. This may be ringing a huge bell or activating a portal, but will always bring the Skaven horde down upon you and you will need to stay alive until the level ends. This is where Vermintide 2 is at its best. Don’t get me wrong, picking your way through the foreboding environs, fending off sudden onslaughts of Skaven and navigating crumbling cityscapes or dank sewers is incredibly atmospheric; but these end-of-level events force you to work together and use every trick at your disposal to survive.

Switching between ranged and melee weapons works seamlessly, with Viktor the Witchhunter wielding a brace of flintlocks and a rapier, while pyromancer Sienna slings around fireballs, soldier Markus swings a giant Warhammer, elf ranger Kerillian rocks slim daggers and a longbow and Bardin the dwarf goes ham with hatchets and a crossbow. Add in the special skills each character unlocks, incendiary devices you’ll find dotted around the levels, and occasional environmental hazards, and you’ve the recipe for a changeable, diverse adventure every time. My only real complaint is that the bosses can be far, far too resilient to damage. A solid hit from a rat ogre can take away half your health, but the bosses are such damage-sponges that it can take an absolute age to wear one down. When you have rat mages throwing vortexes at you, dragging you away or peppering you with Gatling gun fire, and you’re already fending off the scuttling horde, these boss fights can become wearying. Even when played with friends on mic, Vermintide 2 pulls no punches where difficulty is concerned, and even on the Recruit setting can be a stiff challenge.

Any fan of the sub-genre and certainly any fan of the first Vermintide will lap this up. So little has changed that it’s all instantly familiar, but there are enough new areas and challenges and unlockable loot that you won’t feel an overpowering sense of déjà vu. Aside the difficulty spikes and occasional performance issues, Vermintide 2 is a solid sequel to a solid game.

More of the same it may be, but when it’s this much fun, no one is going to complain.