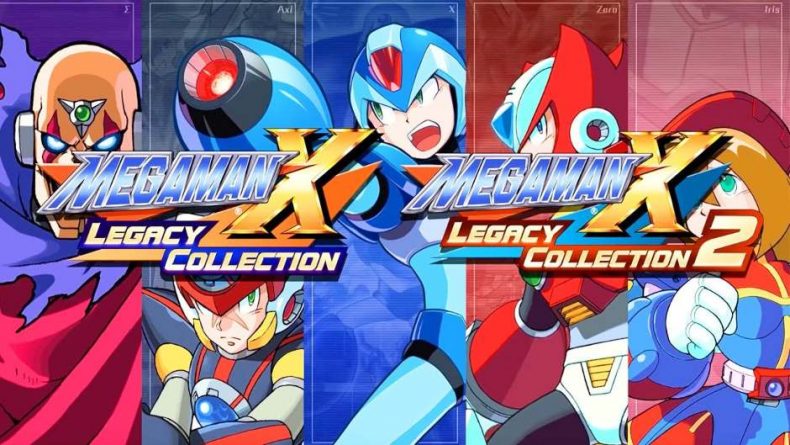 Capcom’s blue bomber has been around for a fair old while, but his lack of presence in today’s almost mascot free world is a shame. But, with ye olde franchises like Crash Bandicoot making comebacks nowadays, and with Sonic Mania proving there’s still life in old style games, we now see Capcom re-testing the waters by bringing Mega Man back for another legacy collection, this time with the X series.

It’s quite odd looking back on this and seeing such harsh political themes of segregation, control and despotic rulers. These were never things mentioned in the reviews of the games when they originally released back in the day, but the thing is, they’re kind of let down by poorly scripted and voiced anime cutscenes that haven’t benefited from any kind of visual upgrade for this collection. The pixel art looks great in HD, and there’s some amazing work on display here, but it’s a shame the cutscenes haven’t received some sort of visual bump.

The story of the X series is that Mega Man X has been woken from a slumber to fulfil his purpose of restoring peace to a world that is on the verge of ruin. Rogue reploids (androids to you and me) called Mavericks are determined to bring about an age where they rule, so it’s up to an ever expanding cast of Maverick Hunters lead by X to put a stop to them. As the series goes on it’s cool to watch the art improve and the cast grow, although the less said about the 3D games (7 and 8) and the addition of Axl the better. Let’s get to the nitty gritty, there are eight games here – even if the last two of them are naff – that’s still a lot of bang for your buck. Each of the 2D games comes with adjustable filters as well, I’d recommend turning off the Type-1 filter and either having no filter at all or going with the Type-2. The default filter smooths over the palette and gives the game a really ugly look that isn’t pleasant to look at, while the Type-2 filter gives you the proper pixelated look and replicates the lines of a CRT TV, a much better way to play.

That said, it’s amazing how disappointing the 3D entries are. At a time when everything was going 3D it was deemed that Mega Man had to follow suit, and because rendering tech wasn’t as advanced back then the character and enemy designs had to be scaled back to accommodate what could be done, as a result nothing looks anywhere near as good as anything from the 2D entries. Also, the camera is way too close to the action and the movement is clumsy and slow. It’s a good thing the 2D entries are as good as they are really. It’s worth remembering that these games came about at a time when games were bloody hard, and all of these will present a serious challenge to pretty much everyone (barring those who speedrun these for fun). For anyone who believes they’re just too challenging, the games come with a ‘Rookie Hunter’ mode which lowers all the damage you take to a minuscule amount, and at times it almost appears that your life isn’t going down at all. Bosses will still make you lose more health, but overall the difficulty drops so much that nearly all challenge is lost, so use this mode at your own risk. If you just want to enjoy jumping around as the Blue Bomber then you might want to enable this.

If for any reason you find Mega Man bosses a bit easy, each of these two collections comes with a mode called the X Challenge, in this mode you will be put into a fight against not one, but two bosses at the same time. Bosses whose abilities compliment each other. You get to choose three additional weapons to X’s X buster cannon just to try and help tip the scales in your favour a bit. There are variable difficulty settings here too so you can ease yourself into it. It’s a hell of a challenge and more than deserves to stand with the Mega Man name branding. All things considered there’s a lot of game here, but despite different presentations being offered the games all feel the same to play. Things do change up a little bit, notably with a sword for melee combat and eventually the ability to duck (a game changer, trust me), but they never really feel truly different. Production values go through the roof with fully animated cutscenes and voice work in the PS1 era games, but although it all feels way too similar the games are all of excellent quality and aren’t so harsh on the eyes the way the original Mega Man legacy games were.

If you’re new to Mega Man this is probably the best place to start, excellent games and a great system to ease you into what can be something very unforgiving, while series veterans will really appreciate having a full collection at their fingertips that looks great on a large TV without sacrificing the nostalgia (the 16bit titles even have regular slow down moments). Here’s hoping that these collections pave the way for a brand new Mega Man game. Wouldn’t that be something?

A very welcome return for Capcom’s beloved mascot and a hope for a Sonic Mania-esque revival.