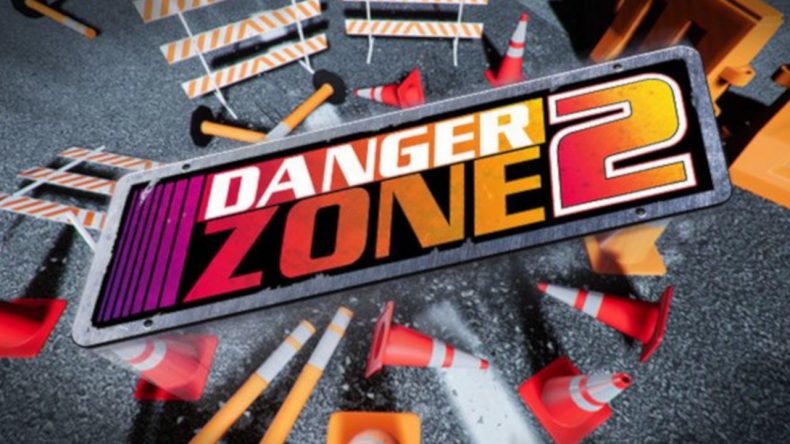 I’ve got to admit, it took me way too long to understand the joke behind calling this game Danger Zone, considering it’s based on driving along stretches of busy transportation routes to a busy intersection with the intention of causing as much damage as is humanly possible. Yes, it’s a riff on Highway to Hell.

I jest of course, because, when playing this game I’ve had Kenny Loggins’ dulcet tones ringing in my ears as the sound of windows crashing and explosions go off in the distance. This is the second return of what is essentially a stand alone version of Burnout’s crash mode (Three Fields Entertainment is made up of former Criterion members), you’re dumped onto a track with the main goal of destruction and a secondary goal for a cash boost; while it’s the main goal you’re playing for, it’s those smaller, secondary goals that will push you to try just that little bit harder. Wreck the limos, jack-knife the semi-trucks, ram off the boats, take out all the taxis, get ten close calls, all of these are designed to seems simple, but will be maddeningly out of reach for the most part, prompting you to restart again and again until you get it just right before ruining it all with a lame shunt just as you enter the danger zone. Them’s the breaks and when it does go wrong you only have yourself to blame.

Anyone who has played Crash mode (or Danger Zone for that matter) will be familiar with what hitting the danger zone entails here. It’s normally a busy intersection littered with cash pick-ups and extra ‘Smashbreaker’ icons to help ramp up the chaos, get yourself buried several vehicles deep into a pileup and watch the cars fly. You can use the time in the air to guide your car to other icons that you had previously missed or into the path of other traffic to maximise your money making potential. Unfortunately the car controls like…well, a wrecked car as it flies, meaning you’ll need a bit of luck or an extra Smashbreaker if you want to grab something that lies tantalisingly out of reach. The game looks great and there’s an excellent sensation of speed, it’s obvious that Three Fields hasn’t forgotten the things that made Burnout great. Even though it feels implausible that there’s traffic on roads where the bridges are out or horrendous roadworks that would bring even the best motorways to a standstill it all travels past at a great lick. The thing is, it’s all smoke and mirrors, hit certain places just right and you’ll fly right past the set dressing and wind up somewhere with nothing in it and low resolution textures, or, as I did at one point, underwater, which is just an undulating mesh sitting lorry height over the top of a regular ground texture, then again, a lot of game’s development is about making concessions for performance.

Ensuring you get crashes just right is the name of the game, and setting off your Smashbreaker at the right time for maximum cash generation winds up being a spectacle as cars fly, lorries shed their payloads and sparks glisten, but oddly the vehicles themselves remain intact. Windows show cracks but don’t shatter, doors and bonnets open but never come off, and fuel tankers never explode. It’s a little disappointing considering the aim of the game, but pure numbers are the order of proceedings rather than eye candy and it’s here where Danger Zone 2 really shines. Probably the biggest excitement Danger Zone 2 generates is the possibility of a spiritual successor to Burnout, the hallmarks are here: fast action, close calls, explosions, takedowns (in a way) and most importantly a real sensation of speed. What we’re waiting on is Three Fields Entertainment to give it that extra push, the template is there, it just needs to be filled.

As a score attack game Danger Zone 2 is great, even if the actual quantity of destructive areas is a little lacking. At the end of the day having too many of them would harm their replay value considerably and what you should be doing is aiming to tweak your run again and again until it just clicks and your score stands head and shoulders above everyone else’s. If there’s one thing that this should really be criticised for it’s that the scenarios all feel a little bit too samey. There’s no variation in the overall goal, so, as long as you’re happy driving into traffic over and over again in the sake of bigger and bigger numbers you’ll have a blast here, just don’t expect anything else.

It’s great to see crashing as a major game mechanic back with a bang, Danger Zone 2 is the smash ‘em up we’ve been waiting for since PS2 era Burnout.

You may also like
danger zone 2Three Fields Entertainment