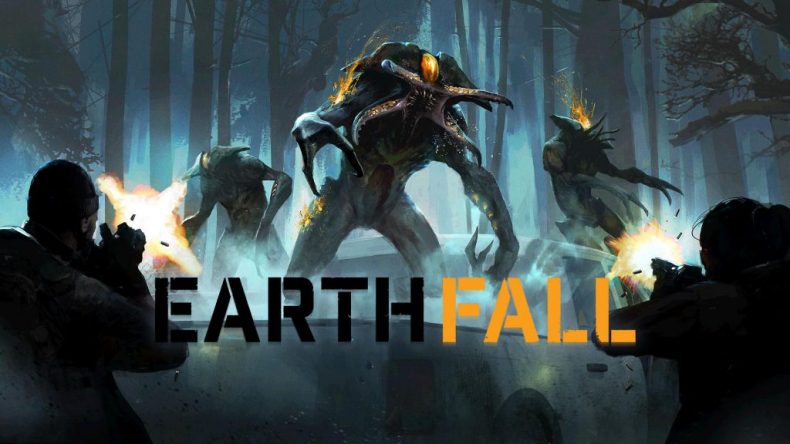 To call Earthfall derivative would be like calling water wet, granite hard, or the Justice League movie painfully forced, in that it’s entirely, one-hundred percent accurate. For context here, we can look to Earthfall’s closest peers. For instance, someone played Left 4 Dead once and moulded that concept into Evolve, wherein you work together to hunt giant beasts, heal each other, revive downed teammates and survive intense end-of-level encounters. Someone else then played L4D and created Vermintide, wherein you fight a horde of rat-men in an apocalyptic fantasy world, heal each other, revive downed teammates, etc.

Then someone else played Valve’s masterpiece and figured the best way to plug a nonexistent gap in the market would be to emulate L4D’s exact concept, look, and feel, swap the zombies for aliens, leave in the healing and reviving, but remove the fun. The result is Earthfall, a piss-thin rip-off of Left4Dead that attempts to do nothing original and utterly succeeds. So I guess there’s that.

You pick one of four survivors, Danny, Roy, Maya or Jonas, and are dropped into a suburban area with nothing but a pistol, and told to find the nearest cache house (or safehouse, by another name). There’s no freedom to choose a stage or approach the game your way, and no grandstanding whatsoever. Instead, you’re literally told to get to the objective, at which point Earthfall starts throwing everything at you with zero build-up or tension. The aliens simply charge you, and the special ones turn up in seconds, with neither fanfare nor clear instruction. There’s the Sapper who explodes, the Thresher who jumps you, the Whiplash who drags you away from the group; a tank, a weird shielded floating squid thing, and a bunch of other cookie cutter enemies. Most of it is unashamed copycatting, which would be fine if it was executed with even half the charm of the game it so blatantly apes.

Sadly, though, the shooting is far too loose, resulting in it being hard to kill even simple drones. Also, you can shoot teammates, which is an incredible irritant when they’re constantly running in front of you, catching your ammo and prompting the game to chastise you in the same hilariously clinical way each time. My first few games were solo with bots because I struggled to find people online, and they were over real quick. The AI is utterly useless and will go down in seconds, leaving you either bleeding out or struggling to get the revive in time. The big fights when the horde suddenly rushes you have the potential to be really intense backs-to-the-wall affairs, but there’s no chance of that when playing with the AI – and even when playing with other people, the frequency of the Special aliens is such that you’re constantly being grabbed, pounced or exploded on. The games I played degenerated fairly quickly into sloppy messes, but then I rarely had a full team of players and had to rely on bots more often than not. There are end-of-level events that play out like L4D’s Crescendo Events, in that you must activate something that brings in the horde and then hold your ground until rescue or escape, but some of them are a bit forced. For example, one of them requires you to download files to a USB drive which, for some reason, attracts the horde. Anyone who’s watched Homeland knows that USB data transfers are only traceable in the last 3 seconds.

Jokes aside though, it’s simply another way for Earthfall to remind us that we’re still waiting for Left4Dead 3. Even the environments look like bland copies, and they’re horribly restrictive. A case in point is the very first level, when you’re told to reach the safehouse and the quickest route is through the bushes and over the gardens to the right – except the bushes are as hard as a concrete wall and you’re forced instead to go through the suburban area ahead, which is crawling with aliens. It’s a very claustrophobic feeling for a game released in 2018, and is indicative of the way Earthfall funnels you from one objective to another with little room for creativity. In the same level I came upon an ambulance and firetruck blocking the road. I should have been able to climb over them, but couldn’t, so instead assumed I was being clever by blowing up the convenient red barrels placed against them. After an almighty explosion, the smoke and fire cleared to reveal the trucks completely undamaged and still very much in the way. I was forced, again, to take the route the game had predetermined for me. Left4Dead was never big on story, but the characters had personality (helped along by the awesome CGI intros to both games). Earthfall features none of the charm, with the four protagonists spitting out repeated soundbites and throwaway commentary. They’re also as visually forgettable as they could possibly be, which really doesn’t help you care about the game world or their place in it.

Sadly, there just isn’t a lot here to base a recommendation on. If you’re desperate for another group shooter and Vermintide, Evolve, or even Left4Dead (through backwards compatibility) ain’t getting it done, you might find a few hours of enjoyment in Earthfall, but the lack of replayability and diversity will be a deal-breaker for some – especially when coupled with the lacklustre shooting and shoddy pacing. Add to this that inconsistent frame rates, lag, collision issues and muddy textures further mar the vanilla visuals, and you’ve got a game with serious issues on your hands. There are small moments of frantic fun when played with a team of friends that will almost certainly make up for some of the shortcomings, but on the whole this is a hard one to care about.

Can be fun with friends

An uninspired, unoriginal Left4Dead clone that suffers from wishy-washy shooting and a lack of polish