Aporia: Beyond the Valley Review 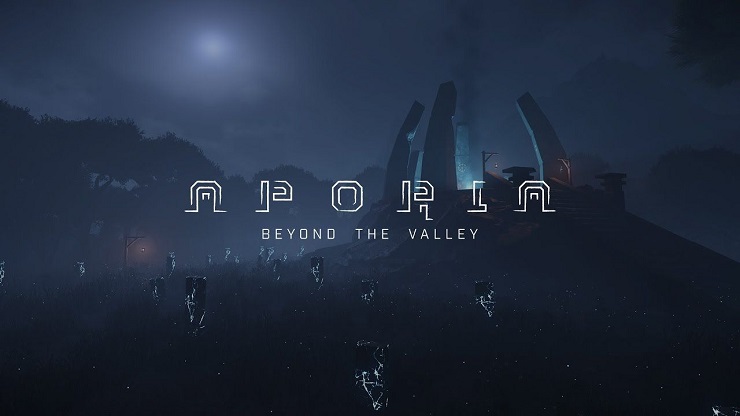 Many stories are told through the pages of a book or the actors in a movie, but sometimes the best kinds of tales are the ones where you never hear a word. You can tell so much about something through the things you see and the environment you explore, and Aporia: Beyond the Valley gives you a strange land to learn, uncover its secrets, and understand why you are a part of it.

When you start, there is no knowledge of why you are where you are, or even who you are. There are no books lying around – no voices in your ear. Instead, you find your way around the mysterious world by moving around it. One of the first things I noticed about it was how wonderful it looks – how the forests and the mountains appear under Aporia’s golden sunlight. It’s a beautiful game that begs to be explored, and its secrets uncovered. It’s not completely open, and there’s always a rock face too tall, or a cliff edge overlooking a steep drop to certain death, but that’s not a complaint at all. This never stops you finding a new path, though. At first, everything’s unclear, but much like games such as Journey or The Witness, using your eyes and your brain go hand in hand. There are plenty of puzzles throughout Aporia: Beyond the Valley, and knowing how they work can be gratifying just as much as it can be so very, very annoying. On occassion, there’s no clear solution, and with some puzzles luck plays a factor, but you are given hints, and again, you need to explore your surroundings to find the answers. It might be a crank needs finding, or a selection of symbols need lining up, and if you don’t search everywhere, you’ll not progress.

The story – told through the skeletons that line the floors, caverns, and abandoned living spaces, the illuminated shadows of the island’s past, and the tapestries that fill huge caves and forests have a poignant realness to it, even if it seems confusing at first. However, as you see more of what role light played in their lives (particularly the one you are in possession of), you understand. It’s a great way to tell a story, and the narrative of Aporia: Beyond the Valley feels mightily fleshed out in these moments. You walk around the world with a small incandescent tube that you use for a whole manner of things (the tube you learn quite a bit about the more you play), and learning how to use it doesn’t take too long. There are a fair amount of hints as you play, but these only help familiarise you with the basics. You collect jugs and pots of ‘light’ that will replenish what you use, and you’re never really in short supply of the stuff. You’ll use the tube to insert into stone altars (which unlock doors and open passage ways underground), make flora grow so you can climb over it, and create plants to replenish health (amongst other things).

Although the game looks good, there were a few visual issues, especially when climbing up something, be it vines or ladders. You’ll find yourself at the foot of your ascension, and when you click to climb, the transition is janky to say the least, followed by your disappearance into the vast nothingness just as you’re stepping off. There’re some texture pops, especially as you find bigger landscapes, but for the most part it runs without a hitch. The world of Ez’rat Qin is the game’s biggest biggest and most interesting character. It’s a place full of mystery, magic, and compassion. It’s a place of loss, death, and sadness, and it’s a place you never want to leave. I couldn’t help but think of Morrowind, or at least the plains of Tamriel as I looked for the next door; it holds a lot of intrigue, whether you’re looking around the Ewok village (you’ll know when you get there), or the abandoned marketplace. It’s also worth mentioning how glorious the music is, and there’s a beatufiully sweeping score throughout, complimenting whatever part of the world you’re exploring at any given time.

There’re a lot of puzzle games out there, and there are those similar to Aporia, however, very few have the beauty of its world, or the complexity of its puzzles. Some are tough – very tough in fact, but once you get a little bit further, the frustrations wash away. Regardless of a few technical issues and some particularly hard puzzles, Aporia: Beyond the Valley is a visual treat that gives you plenty to think about

Puzzles can be tough
A few performance issues

There may be a lot of firt person puzzle games on the market, but this has something that warms the soul. The world is interesting, the puzzles are challenging, and there's always something to see.