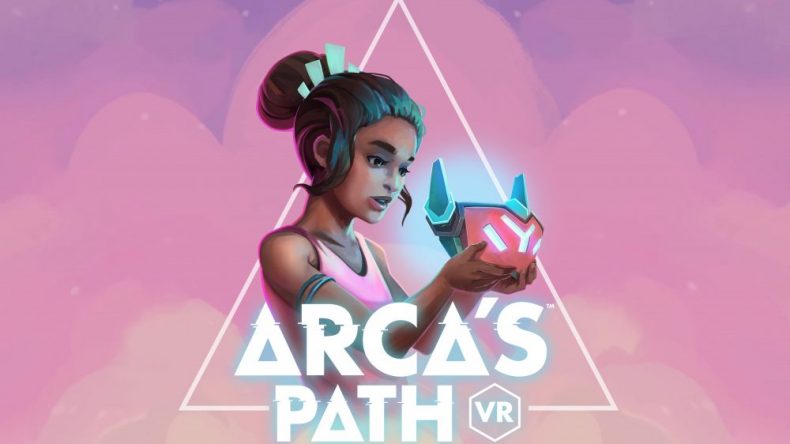 The versatility of VR continues to offer a plethora of experiences, and as someone relatively new to it, I’m pleasantly surprised at the variety out there. One thing I’m always happy to see when playing something new is a lack of reliance on Move controllers, solely because I’m a lazy bones and the less I need to set up, the better.

Arca’s Path strips back VR to its fundamentals, with your head as the only controller. It’s a simple yet effective approach to gaming, never requiring too much thought but offering a challenge nonetheless. The purpose of the game is to guide a ball around various courses and through checkpoints with your noggin, collecting crystals if you wish, eventually reaching the end and moving onto the next level. Its simplistic mechanics mean that it can all be done as you sit back in your armchair and get lost in a rather pretty world, listening to a soothing soundtrack at the same time.

There are 25 levels in total, and whilst none of them are irritatingly difficult, it does take a bit of time to discover the nuances of movement. A green triangle represents exactly where you’re looking; if you look well in front of the ball, it’ll roll at a faster pace than if the triangle appears only a few inches away from it. Many of the earlier levels can be navigated easily as some of the pathways have barriers up, but as you progress platforms need to be carefully crossed or you’ll fall into oblivion.

Platforms move up and down, bridges will need to be nudged in order to lower so you can cross, and weird pyramid-like pillars require you to hit them to bring up ledges and more. There’s other stuff like breakable walls and halfpipes that you’ll roll down, where speed will pick up and your movement will need to be controlled effectively or you’ll drop the ball and restart at the last checkpoint.

The environments never differ drastically, but their designs continue to provide new challenges. The art style of the worlds looks very much like Tearaway, which is welcoming to the eyes. The biggest issue that comes with trying to appreciate the visuals is that you can’t just look around because you’re constantly having to monitor the ball. There is an option for you to press the Touchpad, but that negates the promise of only needing to use your head as the controller.

You can play through each level with the goal of just getting to the end, but there are various paths that let you go back on yourself and explore a little, thanks to the collectible crystals scattered across the world. I really appreciated the more open sections as it allowed me to test the movement to its fullest when slaloming down steep ramps, but when having to slowly manoeuvre around tight corners with no barriers there’s still a challenge to undertake.

Outside of the main mode, there’s a Time Trial mode if little else. It’ll take about 2 to 3 hours to finish the whole game, and I found little reason to go and play again, but if you fall in love with the simplicity of Arca’s Path, these Time Trials will push you to the limit. It is a puzzle game that can be played across every VR device, and a wonderful entry game to those people who have never tried VR like your Gran or you cat (please don’t strap the VR unit to your pet – Ed).

Arca’s Path is a relaxing puzzler that uses head-tracking controls in an effective way whilst still providing a challenge. Its pretty world and calming soundtrack are soothing and enjoyable, and whilst it can become repetitive due to the similar style of level design, it’s still worth a go.

Arca's Path is a simple game with some nice challenges and some nice level designs, and never becomes too difficult to allow all ages a chance to enjoy.