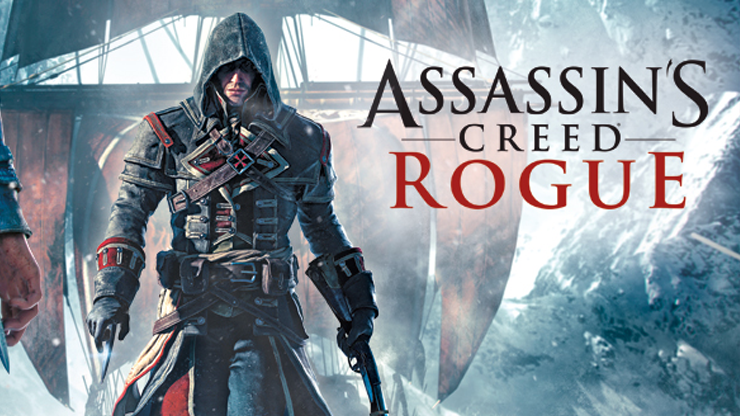 There are three F-words that sum up Assassin’s Creed Rogue: fiddly, frustrating, but most of all, fun. Like many, I originally dismissed Rogue as a shameless cash grab, milking the last generation of everything it’s got. Instead, what Ubisoft have delivered is one of the finest Assassin’s Creed titles to grace the PS3 and 360, and a fitting swansong for a series moving onto pastures new.

Things kick off back in colonial America, just prior to the Seven Years’ War. The Assassin’s dominance – which you helped build as Edward Kenway in Black Flag – extends over the continent, and you’re in the shoes of a new assassin, Shay Patrick Cormac, running missions for the order’s master, one Achilles Davenport of ACIII fame. If you played the woeful third – well, fifth – instalment, you’ll know that by the time of the American war for independence, the Assassins had been crushed, with how they went from strength to desolation left unexplained. The answer is Shay, who turns from the Creed after it causes him to kill thousands of innocent people. Seeking to right his wrongs, he defects to the Templars, chasing down those he once called brother. While not the best story in the series, it’s gripping enough, and it is interesting to see the story from the Templar’s perspective. Series veterans will appreciate the nods to past games and the various cameos, as well as how it fills in a blank space in the series narrative. Newcomers, however, may find themselves a bit lost.

Missions are better than before as well. Eavesdrop objectives are nowhere in sight, and while there are no real assassinations, there are a decent variety of sneaking, chases, and fights across both land and sea. Nothing massively stands out (aside from one massively unrealistic set piece early on that feels out of place in a series so steeped in history) but there’s plenty here to keep fans of the series happy.

Naval activities return: you’ll be attacking ships, boarding them for their cargo, and sending the vessels to the fleet missions meta-game. Like with the Jackdaw you can upgrade your ship, and you’ll need to do so for later missions. A nice twist in Rogue is that you can be boarded. Getting rammed by a bounty hunter ship deposits enemies on your deck, and clearing them giving you control of their ship. Forts return from last year’s instalment and work exactly the same, and they’re joined by gang hideouts on islands (and in the only explorable city, New York) where you must find and kill the hideout’s leader, as well as cutting down its flag. Doing so gives you control over the immediate area, providing an income and opening up shops.

Controls are largely the same as ever, with the refined freerunning saved for Unity, but there are some new gadgets to play with, including a grenade launcher. You’ll still get annoyed when Shay tries to climb a sheer wall, or plunges to his death when a haystack was right next to him, but it’s no worse than it’s ever been.
In a lot of ways Rogue is a better game mechanically than Black Flag, taking some of its rougher edges and rounding them out. Unfortunately, several other things hold it back.

To start with the setting is just not as inspiring as its predecessor. Black Flag had pirate-charm draped over the warm and inviting Caribbean, with a hero to match. Rogue is barely comparable, with the grey and cold North Atlantic, and a protagonist with the worst “Oirish” accent I have ever heard. It’s just not as enjoyable a world to be in and explore. In a similar vein, it’s grafted on quite a bit from the poorly received ACIII in terms of tone, further detracting from the excellent Black Flag. The most obvious example of this is New York, which, while better for freerunning than its previous incarnation, is still nowhere near the streets of Florence. It’s also barely used, and you can finish the game with barely half uncovered – making it feel like artificial padding. The modern world stuff has hit an all-time low as well. You play the same nameless tester as in Black Flag, and after a glitch you seem to be the only one capable of solving a series of ridiculously simple sphere puzzles to reboot the servers. Mercifully they’re kept to a minimum, but walking around a set of linear floors with no danger present while being call a numbskull isn’t fun on any level.

Ubisoft has also thrown in everything from previous games in the series. You can upgrade your ship, Shay, renovate buildings, craft items, and partake in the naval missions side game. It’s a lot to do; almost too much, with too many menus to go through to work it all out. You can ignore most of it, but some bits are forced. Crafting gear for Shay involves hunting the required animal for pelts. The latter part can be skipped by buying them from a store, but you still need to then go and craft each bit in a separate menu. Why you can’t simply buy the finished product for the total price I’ll never understand. Worst of all are some of the missions though, with two late game chases amongst the most frustrating things I’ve ever encountered in a game. Closing down on the target is next to impossible due them dropping smokebombs and shooting at you, and if you do manage to catch them, Rogue prevents you from initiating combat, meaning you have to wait for them to attack you or drop another smoke bomb before starting again. For one mission, I spent a few minutes watching the target’s pattern (running in a figure of eight around a small settlement) before climbing a building ahead and air assassinating them. The other, I died and took a shorter route to where I knew they were going. Both times felt like cheating the game, but there didn’t seem to be any other choice.

Rogue is fiddly and frustrating, then, and it will make you curse like a sailor at times, but it’s still great fun. Taking the base gameplay of Black Flag, Ubisoft have filled in a pretty glaring gap in the Assassin’s Creed mythos, with Rogue actually setting up Unity quite well. If you’ve already played the next-gen showpiece this is going to feel old-fashioned, and don’t expect any new ideas, but even if you thought you’d had enough of plundering on the open seas there’s enough here to draw you back.

Takes the best stuff from Black Flag.
Fills a gap in the series’ story
New gadgets are fun to play with.

Rogue doesn’t bring much new to the table, but there’s more to enjoy than simple fan service