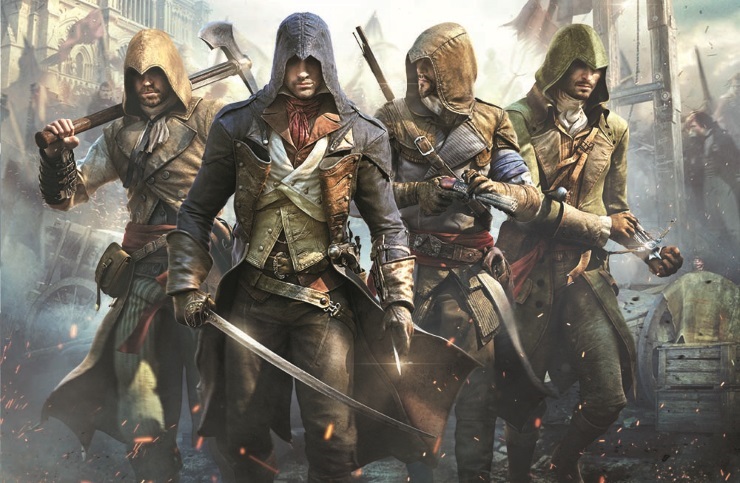 I’m walking along a Parisian street, crowds of hundreds surrounding me as I push my way through, then as I reach the end of the road the awe-inspiring Notre Dame de Paris engulfs the skyline in what is one of the most visually impressive moments I have ever experienced in any game on any system.

The first thing you notice in Assassins Creed Unity is just how beautiful it is. This is by far the best looking game I have ever played, whether it’s showing you a crowd of people in a small street or you’re standing on a viewpoint admiring the rooftops from across the city. The buildings are incredibly realistic, with Notre Dame looking almost identical to its real world counterpart. Paris as a whole is an amazing city to explore, with a lot of variety and events happening on every corner thanks to the unbelievable number of NPCs that can appear on screen at one time.

On the story front, the modern day content has been almost entirely side-lined in favour of spending more time in Revolutionary Paris. Arno’s basic motivation revolves around the murder of his adoptive father and his search for the culprit. It’s not massively original, but the characters involved and a couple of decent plot twists make the story an enjoyable one. Arno as a character isn’t quite as lovable as Ezio or Edward, but he’s still a damn sight more interesting than Connor and he does make a few good jokes. Easily the most interesting additions to the story campaign are the assassination missions themselves. Here you must search the large mission areas to find what you deem to be the best assassination spot and escape route from multiple options. Crucially, you must escape the area after you dispose of your victim, so running past guards and stabbing the target isn’t really an option any more. Perhaps the only assassination that isn’t particularly great is the final boss fight, but the story behind it makes it acceptable.

Assassination missions aren’t the only interesting ones on offer, though: a number of the side quests are genuinely diverting in their own right. The murder mysteries, while usually fairly obvious, are a great change of pace from killing people, while others have genuinely unexpected moments such as meeting Marie Tussaud and having to recover some heads. The wealth of side missions and collectibles will keep you entertained for hours. The Brotherhood management missions, where you build up a team of assassins and send them out on errands, have been moved across from the Unity companion app (which can also be used as an interactive map, and features puzzles wherein you use eagle vision on a building to find hidden symbols). The Brotherhood missions are the same as they have been for years, and the puzzles in the app are fairly uninteresting and quite difficult, meaning the best use is for the interactive map that will sync to your console to display Arno’s location. Any massive Assassin’s Creed fans looking for some on-the-go action will enjoy the missions, but anyone else can probably afford to give it a miss.

Controlling Arno feels much smoother than ever before. Not once did I die because the free running system decided I wanted to throw myself off a building, while jumping 180° off a wall by accidentally tapping A too many times has also been removed. Climbing feels a lot easier, quicker and importantly enjoyable, but Arno still manages to get stuck on some strange ledges such as the edge of a fountain or a chair. He also has the amazing ability to run up almost vertical roofs, apart from when climbing said roof takes more than a few seconds, which results in Arno magically teleporting back to the last stable location. Combat has also seen some improvements and is quite challenging if you get attacked by multiple enemies. Long gone are the days of spamming B to counter everyone, now you must think tactically and use every part of your arsenal. The extensive customization options also allow you to select from a range of weapons and armor to create a combat style that suits you. Personally, I focused on one handed sword combat with a lot of stealth skills to take out enemies one by one instead of instigating a massive fight. Impressively, the finishing moves look gruesome with blood splattering across nearby walls and spreading across the uniforms of your opponents.

Co-op finally makes an appearance in the Assassins Creed series and it works really well, if you and your group play it in the right way. If you plan your attacks, work together and communicate you really do feel like an amazing bunch of assassins that can pull off incredible heists and kill the most difficult of targets. However, if you are unable to communicate or one person decides to run in to fight everyone it becomes a lot less enjoyable. Co-op in Assassins Creed Unity is most certainly one to play with friends and not with random people. The co-op missions themselves have some narrative that is separate from the main story, meaning you don’t have to play them, but you are missing out if you don’t. Unfortunately, Assassins Creed Unity features a number of small niggling issues that when combined detract significantly from the game. Often animations, especially in combat and co-op, will trigger at strange times making them seem unnatural. Some crowds are weirdly difficult to push through and NPCs often get stuck or, in some cases, have the ability to hover. The enemy AI is still questionable and the line of sight they have makes you wonder if some of them could be legally blind. There are also frame rate drops that are noticeable and somewhat frequent, though some are worse than others. Hair in particular (especially beards) looks incredibly unrealistic compared to the rest of the models. Finally, and perhaps most hilariously, NPCs love to call you a “pillock” in the most un-French accent ever.

But Assassin’s Creed Unity is immensely good fun to play, even though an average story combined with a number of smaller issues let it down. That said, the improvements to free-running and combat make the experience very enjoyable. The best part of Unity is Paris itself, and just how good everything looks. The city is full of interesting things to do, and when you factor in some enjoyable co-op and the brilliantly overhauled assassinations, you’re left with a solid adventure that just isn’t quite as revolutionary as you might have hoped.

Review based on a Ubisoft hosted review event. Co-op further tested at home with the GodisaGeek editorial team via retail code.
Liked it? Take a second to support GodisaGeek.com on Patreon!

Lots of minor issues.
Mediocre story.
You will get called a Pillock. A lot.

A solid entry in the Assassins franchise that does a lot well but still has areas to improve.