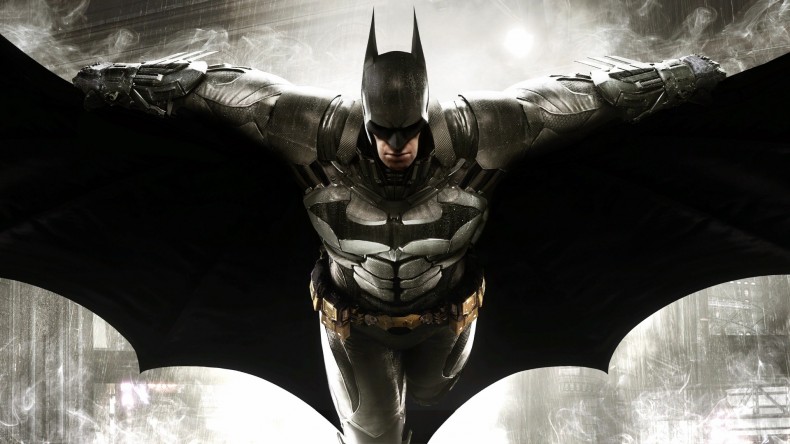 Editor’s Note: For those of you that skip right to the bottom of a review (it’s fine, we know you do it, you’re welcome here anyway) or are scared to death of having the game spoiled, know that there are no story spoilers here whatsoever. But just in case you’re about to click away: Arkham Knight is incredible. I mean, I’m sat here with a near-100% save file, and I rarely do that for a review. It’s that good.

Finishing Arkham Knight, I felt exhausted. Even now, I feel bereft, like something has left me and I’ll never be the same. This is one of the best Batman stories committed to paper in recent memory, and it’s ours to enjoy. But I can’t talk about the story. There are moments that will make you jump, and there are some that will make you drop the controller in shock. But I can’t talk to you about them. Such is the isolated life of a video game reviewer, trapped in a bubble.

But it’s also the life of Batman. Lonely, never allowed to let anyone get too close in case they become a target. More importantly, fear and isolation is the focus of Arkham Knight, comfortably the most personal of the Arkham trilogy, and easily the best told of the three Rocksteady developed games. And let’s not be too unkind to Warner Montreal, because Arkham Origins was a noble effort, but this is Rocksteady stamping their seal onto a franchise that came from nowhere, but ends on the ultimate high, quality wise. This is Batman: Arkham Knight, and I forgot that games could make me feel this good. It’s a pure distillation of every idea they’ve had, in one smooth, exceptional package, with added Batmobile – which, coming from someone who was cynical to its inclusion, is fucking cool, and don’t let anyone make you feel bad for thinking so. The combat that kick-started a thousand copycats is here again, honed to perfection, with new moves and new gadgets. They’ve been slowly including more and more villains, which I felt held City back a little, but Knight knows when to say stop and feels just right. Dual play means you can fight alongside AI controlled allies, who will match you blow-for-blow as you fight, and if the combo is maintained, a prompt appears: “L1 for dual takedown”.

Suddenly Batman has grabbed an enemy and thrown them into the air for one of his friends to smash down on their neck, taking them out. Then guess what? You’re controlling said friend, and you can continue battling away, switching back and forth whenever you fancy (L1), or every time you do a dual takedown. And did I mention that when you’re alone you can do Batmobile-assisted takedowns, too? They play out exactly as you think they do, only ten times better. The combat system is still the best in class, and with the addition of fear takedowns, you can surprise enemies and activate a slow-mo instant knockout attack on four enemies, which itself is upgradeable.

I keep falling upon a single word, because I genuinely cannot think of a better word to sum up Arkham Knight with. So at the risk of sounding like a fawning teenager: Arkham Knight is just so cool. It’s the game that I, a 34 year old man with kids of his own, dreamed of back in my youth. Like no other game before it, it makes you feel like the protagonist. Cheesy taglines be damned, but it really does make you become Batman in a way that is utterly commendable and badass. The Batmobile is a sublime inclusion. Not because it adds tools an ever growing arsenal, or because it’s yet another upgrade tree to evolve, and not even because it’s responsive and can switch from a nitrous fueled race-car to a tank at the press of a trigger. No, it’s brilliant because it makes Gotham a more believable place. The promise of this game being bigger than the last one is something constantly bandied about by developers, with no thought to how that actually scales to a real person. Here, the roads are widened to accommodate the Batmobile, and it really works wonders – if Gotham is a bigger place than Arkham City, you wouldn’t notice it, because it feels more alive, believable, real.

It’s arguably not even the quickest way to get around, and after a few upgrades, Batman can soar around the whole map without too much trouble. But (and here’s that word again) what it does do, is add yet more to the “it’s cool” feeling. Whether you’re on the ground or in the air, a tap of L1 will bring it screeching into view, and Bats will dive instantly down towards it, or jump into it. You’ll be tearing around, solving riddles by using the pulley on the front, or diffusing bombs by revving up and sending an electrical current to create a controlled explosion, before driving away and double tapping “X”, which propels you into the night sky, gliding around again. Even better, you can remote control it while on foot. You’ve played the Arkham games before, of course (if not, I’d suggest you at least play City, as this is a direct sequel), and you are familiar with those moments of stealth where you approach under a grate-system in detective mode. Now, with the new tools, you can emulate someone’s voice and tell a trooper to open a gate. When he does so, you’ve remote controlled the Batmobile to be there, waiting, and you can unleash hell on them. Christ, at one point I was driving up a wall in the thing. Not in a cut-scene, I was doing it myself. Although there are plenty of collectibles from Edward Nigma, now you can go underground and complete Riddler race tracks, too. The kitchen sink has been thrown in, but in a good way. Don’t worry about spending all your time outside, as you’ll constantly be going back to explore buildings, with no loading screens in sight. In fact, it only loads when you die, which is impressive when you consider how much traversal you’re doing.

Arkham Knight is a gorgeous looking game, as expected. The oppressive feel of Gotham being under attack is ever-present as the rain lashes down on our caped crusader. Neon lights blink in and out of the darkness, and the distant skylines feel within touching distance. It’s important that Gotham feels alive, as missions can be found simply by noticing something that isn’t right as you dive under bridges and grapple around the city, then explore these out of place situations. Almost more impressive is the voice acting. Exactly who you’d want to hear is present and on form. It’s also one of the most bug-free new-gen games I’ve seen on PS4. I think I saw two moments of slowdown during hectic chase-scenes, but even then I wasn’t certain they had even happened. In the twenty-plus hours I spent with it, there really was nothing of note. At some point, I guess we have to talk about the season pass, which feels so much more egregious given the quality of the on-disc product. Just know that you’re getting a lengthy, single player adventure for your money – and you don’t have to buy more content. When the main story is done, you can return to mop up the side quests (and there’s a new game plus, too). Though some of them are standard “take back the city” type missions, there are a good few that revolve around Gotham’s most wanted criminals. There are some surprises in store for ardent fans among them, but it doesn’t go overboard with the numbers, and (Riddler trophies aside) you can be done with everything else in the region of 22 or more hours. While you can attack the main story as quickly as you want, the side-missions are slower to unravel, which works well and gives you a chance to level up and acquire new skills.

If Aslyum showed us what was possible, and City was a good sequel that didn’t quite reach the same levels, then Knight is the crowning glory. It’s exciting, beautiful, haunting, dramatic, and compelling. It leaves you breathless, begging for more. This is the best game I’ve played this year so far, and it gets the mind racing as to what Rocksteady can do next. Occasional difficulty spikes near the end require a little patience, and although it’s often optional, there are lots of Batmobile combat encounters which you’ll either love or loathe. But if you give yourself to it, and if you love the characters, it’ll blow you away. And, Christ… I never thought I’d say this, but Arkham Asylum has just been bettered.

Incredible story, visuals, and voice acting.
Batmobile is fantastic.
Only ever loads when you die.
The ultimate in player agency.

At some point, it ends.
Batmobile might be a Marmite factor.

A fitting end to a phenomenal trilogy. Rocksteady have created one of the best comic-book games ever made.