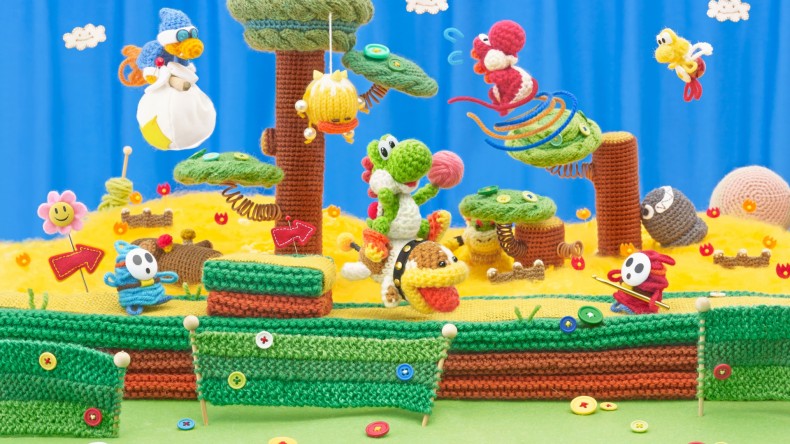 If Nintendo know how to do one thing, it is to take a previous game, make enough changes to make it a viable new game and at the same time make you want to give them your money without you feeling the slightest bit cheated. This is how Nintendo works its magic with every one of the much loved games series’, and it does it with every generation of console. The reason it works, though, is that while the graphical furniture has had an upgrade, the muscle memory shines through every time. This is no different when it comes to Yoshi’s Woolly World, where it seem to have taken the parts that worked from the original Yoshi’s Island and literally rebuilt the game using the contents of a wool and craft shop. Being someone who owned a SNES and played the original when it came out, the grin that stretched across my face started within the first twenty seconds of playing and continued all the way through to the cutesy conclusion. I instantly knew how to play. I also knew what to expect. And for some people, rehashed nostalgia is enough to justify adding this to the collection.

As you’d expect, the reason for the adventure usually pales into insignificance compared the journey itself. The mischievous Kamek has decided to kidnap an abundance of woolen Yoshis, reduce them to yarn and head off to various locations, hiding the stolen yarn as he goes. It is your task to head through the six worlds on offer – each containing eight levels with varying degrees of theme and challenges. Yoshi has a couple of abilities in his arsenal to help him through. He can eat enemies and turn them into balls of wool which he can then throw. He can flutter jump which allows him to jump that tiny bit further and higher to reach the more difficult platforms. His ground pound can squash enemies and flatten scenery to help you progress or find secrets. It’s nothing that you haven’t done before (even if you have never played before), and it’s all very intuitive.

The levels you play through are some of the most beautiful, colourful, and inventive you will see grace any console. For those looking for a break from the browns and greys and dullness of what the new machines offer, Wooly World is one full of vibrant life, with time spent on making sure the wool finish of Yoshi is outstanding. You will spend time looking at the levels themselves as you traverse through them, from how Nintendo has handled water effects using string, to lava monsters made out of red and orange scarfs. Every single area has had such a large amount of thought placed into not only what to base the theme around, but how to reproduce the areas using various materials. The obligatory ice level seems to be made out of blue silk, which you skid around on, while the Sky level has an abundance of cotton wool that you cloud hop. Every last enemy is made out of wool, which unravels when Yoshi takes his tongue to them. Yoshi himself displays his yarn DNA whenever he tries the floaty jump. His legs transform into little wheels when he picks up enough speed. To use the phrase ‘Nintendo charm’ is a bit off, as charm to me betrays the amount of work Nintendo must have put into each level in order to make it look like you are living in a material world. See a little bit of thread sticking out? Try grabbing it with your tongue and watch a secret area be revealed by the unraveling wool in front of you.

What elevates Wooly World above your normal platforming fair is that getting from a-to-be of a level is only the beginning. Yes, you can finish a level within ten minutes – and a world will fall in a hour with ease. But Yoshi has always been about hidden secrets and collecting everything within those levels. Finding five balls of wool will give you a new, different coloured Yoshi to play other levels with, though there are no advantages to playing with different ones. Finishing a level with all your health, collecting hidden stamps and finding all the daisies will give you level stars. When you reach the end of the level you have the chance of entering a mini-game to increase your overall jewel score. Complete some levels and you will be given a badge which grants you a power to be used on a whole level. The badges will let you run faster, give you constant watermelon seeds to spit, increase the power of your ground stomp, or let you see where hidden stamps can be found embedded in jewels within the level. These badges are designed to give you options on how you tackle later levels or how you revisit previous levels for that one missed item. Seeing the end of the game is just the beginning. On every world you will have two bosses to overcome, and for those who have played any of the previous Yoshi titles, these will be very familiar. Do not expect to be overly challenged by any of them; at most you’ll be figuring out the right timing in which to knock them down and stomp on their weak spot. There were only two in the whole game that caused me any real difficulty and even then they weren’t that tough. The intention is to be fun and accessible to everyone, so one of the key additions is a Mellow mode, which gives Yoshi wings in the level to allow you to simply soar around, reducing the challenge considerably and making the game open to some of the younger or less experienced gamers of the household.

A special mention should go to the music, which is sublime and different across every level. This game deserves to be played loud for the sound that Yoshi makes, and so much of the soundtrack is nothing short of outstanding. It is testament to the amount of work that has been put into Yoshi’s Woolly World in order to make sure it reaches the standard we have come to expect.

If you are the type of person who plays a game just to finish it and see the end credits, then there is a possibility that after six to eight hours of solid play, you will see the end credits, the smile will disappear from your face and you will feel slightly disappointed that it ends so soon. However, for those secret hunters, for those who boast a full roster of Pokémon on their 3DS, a complete collection of Amiibo on the shelf, or for those with young children they want to play games with, then Yoshi’s Woolly World promises to be a real treat.

A treat for the Ears and Eyes.
Suitable for all ages
Longevity is there for those who want it.

A bit easy.
A little too familiar.

A total audio and visual delight, Yoshi's Woolly World is a strong addition to the Yoshi game series, though only completionists might find they get the full value from the game.