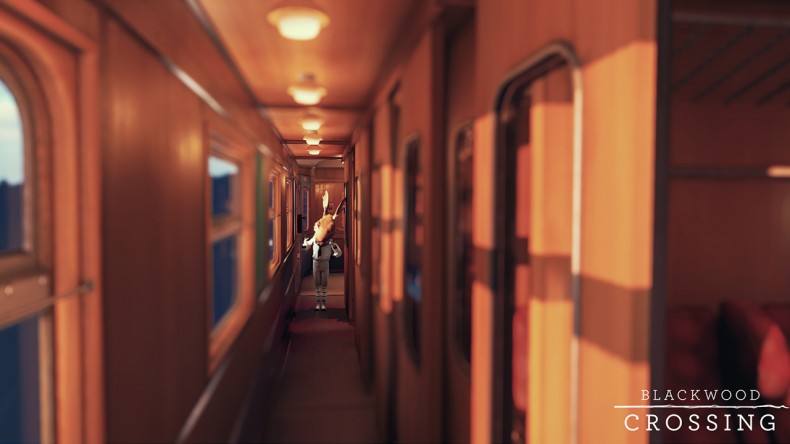 It has been a while since a game has moved me as much as Blackwood Crossing did in its final act. Brighton based Paper Seven’s narrative driven first person game explores themes of grief and guilt in a remarkably effective tale, told through the the perspective of Scarlett and her younger brother, Finn.

The siblings, we learn, are orphaned and have been brought up by their maternal grandparents. It is unclear of their ages; Finn appears to be around ten or so and the limited views of Scarlett suggest she is mid teens, no longer a child, but not quite an adult either. Their relationship is full of love, but strained at the same time as only that of siblings can be.

The tale takes place on a train with Scarlett waking up to hear Finn calling for her, he has wandered off and got himself stuck somewhere. There is a tone of exasperation in Scarlett’s voice, a feeling of someone who has grown too old for childish pranks now and one who is tired of having to constantly watch over her younger brother. She isn’t selfish, she has just grown up, and that is part of the problem. It is tough to talk about what happens in Blackwood Crossing, because to do so would spoil a lot of what makes it special. The cast is limited to mainly Finn and Scarlett with a few others all wearing bizarre paper masks lending a surreal touch to the tale. Although you play as Scarlett a lot of what occurs is from Finn’s perspective, or rather you are afforded the luxury of witnessing events with the added bonus of Finn’s take on key incidents. The scenes operate in a dream like state with creepy supernatural and fantastical elements at play, but it isn’t a horror game at all, it’s a game about love and loss.

Grief is an enormous part of the storytelling, the siblings are orphaned and are dealing with and have dealt with the loss of their parents in different ways, but there is also the grief of growing up. Finn, who is younger than Scarlett feels the pain of her leaving childhood far more acutely than she does. There are glimpses of relatively happy childhoods of long summers playing together, but those feelings of belonging and togetherness have turned to resentment and fear of abandonment as Scarlett grows and leaves her childhood behind. Growing up is, of course, an inevitability, but watching as Finn perceives he is losing his sister and his connection to their dead parents is heartbreaking to witness. I was particularly struck by the focus on leaving childhood, because as a parent that bittersweet pain of a child growing up is being acutely felt by me at the moment as my son approaches his teenage years, and to see that reflected in the eyes of a child was very affecting. The tale that Blackwood Crossing tells takes the form of a mystery. Why are these people here? Why are they wearing masks? What significance does the boy with a rabbit’s head have? Along the way you will be asked to solve small puzzles to remove obstacles in your path. None of them are particularly taxing, rather requiring you to listen to the dialogue or pay attention to your environment, and all serve to add a bit more texture and colour to the overarching story.

There are a few technical issues with the game, loading screens between scenes seem to take longer than you would expect for a game that isn’t particularly asset heavy, and at times the prompt window for interacting with objects is very narrow meaning it is easy to miss solutions to problems. Furthermore, despite the sincerity of the tale, at times the voice acting feels a little unnatural, but none of it detracts overly from the story, which is wonderfully and delicately told.

I had very little expectation of Blackwood Crossing going in, having only watched a trailer a day or so before, but what Paper Seven has produced is wonderful. It is fairly short, clocking in around three hours on my first playthrough, and around ninety minutes on my second. Although the ending reveal may come as a bit of a surprise and is a one time experience, the emotional beats of the story absolutely stand up to repeated playthroughs, in fact I was moved significantly more on the second run through than the first as the key moments had more resonance than the first time when armed with advanced knowledge of where the story is going.

Blackwood Crossing is a beautiful, moving game that takes you to places that are unexpected if you were to just casually glance at it. A few technical issues mar the experience slightly, but overall it is a superb study of grief and the guilt of lost time and opportunity that is associated with losing someone special to you.

Blackwood Crossing is a surprising release, a game that delicately explores the difficult emotions of grief, guilt and love told through the eyes of two orphaned siblings.

Blackwood Crossing announced for PlayStation 4, Xbox One, and PC