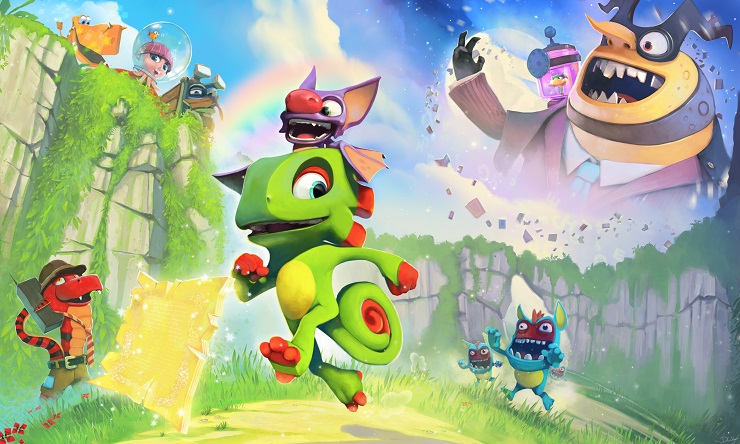 Remember the days of the N64 and PSOne, when 3D platformers were all the rage? Playtonic Games remembers. We had the likes of Crash Bandicoot, Banjo-Kazooie, Spyro the Dragon and even lesser known titles such as Croc, but obviously Mario 64 was the king of that particular castle. It was a good time.

Considering many at Playtonic worked on Banjo-Kazooie, it came as no surprise that its Kickstarter for Yooka-Laylee was funded in such a short time. Some of the best minds in the genre were together once more, ready to make a game that would be a worthy spiritual successor to their N64 classic. But does it deserve a place among the stars?

It certainly looks the part, that’s for sure. Its vibrant, cartoon characters are a real love letter to the N64 Rare days, with a palette that seems to use every colour in the known universe, a breath of fresh air in these days of brown shooters. It can be a little rough around the edges at times, where the animation is concerned, but Yooka-Laylee is mostly a treat for the eyes. That same level of colour variety is lavished upon every world in the game, from the hub of Hivory Towers, to the silvers and blues of Glitterglaze Glacier, and the bright greenery of the opening area’s Shipwreck Creek. The music does a great job of selling each location, with catchy tunes that will stick in your head for hours after you’ve switched off the game. We’re not talking Green Hill Zone or Mario’s original themes, but then, how many games’ musical scores can claim to be as memorable as those classics? Yooka-Laylee has some nice little details, too. For example, if you come up against a group of enemies that has a commander with them, things can go a couple of different ways. Take out the standard enemies and the commander will scream and run away, but take out the commander first and his underlings will stop attacking, instead they’ll cower in fear. Unfortunately, this attention to detail isn’t seen much, but that makes it all the nicer when it does happen.

So what is Yooka-Laylee about, then? Our friends are taking a break, but the dastardly Capital B (a bee that looks remarkably like Gru from Despicable Me) and his assistant Dr Quack have built a great machine that steals all the books in the world, including our heroic duo’s magical book, which drops its pages all over the galaxy of game worlds. A fairly simple premise, which annoyingly takes an age to introduce, thanks to the oddly drawn-out way in which Yooka-Laylee’s cutscenes play out. This would be okay if it had fun voice acting, but its voice sounds are similar to Animal Crossing’s incoherent jabbering, only a million times more grating. Seriously, it will make you want to stab yourself in the eardrums.

The game itself is one big collect-a-thon. Collectibles range from the essential Pagies, the currency used to unlock new worlds (held within Grand Tomes) and progress, and Quills, which are used to purchase new moves. Then there are five Ghost Writers hidden within each world, coins to play Rextro’s arcade games, and much, much more. This is great in the sense that it keeps fans playing for longer, but for anyone just wanting a fun platforming experience, it will soon become quite dull. Sure, the majority of collectibles are optional, but Pagies are needed to unlock and expand worlds, and buying new moves is required to complete many challenges to earn those Pagies, so Quills also become a necessity. This means that the game eventually becomes a grind, as you comb each world for challenges to complete in order to move on, and when you see how many Pagies are required to unlock the final boss encounter, you’ll just want to give up. And the less said about that encounter, the better. It does start off well, I must say. The first world is beautiful and full of fantastic quests, probably the best in the whole game, and it’s genuinely fun to run around. Once you expand it, it gets even better and even offers plenty of reasons to revisit the world later on. The second Grand Tome isn’t quite as good, but is still a great place to explore and it offers a very different experience to Tribalstack Tropics’ opening world. Unfortunately, that’s the best the game has to offer, before it nose dives from the third chapter onwards. The world designs soon lose their quality and charm, with one world in particular being the worst form of grinding, and it brings the fun screeching to a halt, never managing to recapture it.

The sad thing is, Yooka-Laylee is actually a good platformer, albeit with some awkward control issues and a camera that loves to point anywhere except where you want it to point. It has some great level design, with worlds full of quests and challenges, but therein lies its biggest problem: it doesn’t have set levels. Each world is massive once you’ve expanded them, but they really are just open expanses filled with side quests. There’s no real set route through the game and it becomes an issue later on, when you find yourself wandering around just trying to find another Pagie, which usually consists of completing various challenges dotted around the world.

Each world requires a certain number of Pagies to unlock, with another set number required to expand each world. Each world initially offers a medium-sized area, with a decent number of characters, quests and Pagies around to keep you occupied, certainly enough to allow you access to the next world or to expand the current one. Expanding does exactly what it says on the tin. It dramatically increases the size of each world, offering tonnes of new quests and challenges, in turn giving access to even more Pagies. Although this is a good idea in theory, the reality is too directionless and this is where the horrible grinding comes into play. By the time I had unlocked and expanded every world, I had gathered 75 Pagies, which was over ten hours of game time. But you know what irked me the most (if you don’t count the quiz sections)? The hub world of Hivory Towers. I like hub worlds, but when you have to physically search them in order to find your next Grand Tome, it just becomes an irritation. Worse still, you can’t fast travel to worlds you’ve discovered, you have to run to and from them. You can at least open shortcuts that allow quicker access between worlds, but a simple level select would save so much time. Perhaps this was meant to help you discover the secrets and Pagies hidden within Hivory Towers, but I really began to dislike the hub more and more as time went on. As for those quizzes I mentioned, that block your progress in the hub world, they can go straight to hell. It’s amazing that they made it into the game, as you’re literally forced to answer multiple choice questions in order to move on. If it was just the one, it might have been an amusing aside, but there are multiple quizzes and…just, wow. Baffling game design, right there.

It’s not all frustrating, though. The characters you meet are all entertaining, with their own brand of humour to inject into the game. There’s your friendly shopkeeper, Trowzer the snake, who sells all the moves you’ll need in your adventure, there’s the well-known cameo from Shovel Knight, his hunt for treasure spilling into the third dimension, the Knights of Hamalot, Kartos the minecart and more, all out to help or hinder the dynamic duo in every tome’s world. Their designs are spectacular, looking like they belong in an animated movie (not quite Pixar quality, but maybe a lower budget indie film) although they don’t actually have much animation in this game. They stand around and make jokes and take potshots at many of today’s games, often raising a smile, especially if you’re into your thirties or beyond. But again, this brings up another problem. In gleefully taking the piss out of today’s games, Playtonic seems to have forgotten that many of today’s gaming mechanics have actually improved things, but Yooka-Laylee is so stuck in the past, it makes mistakes that this generation of games just should not be making. Let’s face it, the idea of locking vital progression behind collectibles is about as archaic as it gets, and the complete lack of signposting is ridiculous. Nobody wants to be led by the hand, sure, but when the game doesn’t even hint at what you’re supposed to be doing, it will just lead to annoyed gamers that want to switch to a better game.

Sometimes its retro influences do work, however, as its gameplay often shows. The platforming is mostly spot-on, and it does change things up a bit now and then. Dr Puzz’s DNA-modifying machine is one such way. By finding a Mollycool in each world, Dr Puzz can fire up her machine and transform Yooka and Laylee into a world-specific creature or vehicle, allowing you to reach new challenges or even speak to those that previously told you to bugger off, in a manner of speaking. In the fourth Grand Tome, possibly the biggest grind of them all, the transformation genuinely injects a little fun into an otherwise boring world. It’s hardly revolutionary or anything, but it works.

Trowzer’s powers also help to keep things fresh and varied, allowing you to get to otherwise unreachable areas, or to find a way past that pesky area you were stuck on. These range from being able to roll up steep hills, all the way to being able to fly for a short time, and they all have their uses. Some aren’t entirely explained though (or they aren’t explained at all, in some cases) so experimenting with each new power is recommended, but you’ll get there in the end.

These powers are often the key to defeating the bosses of each world. Finding these bosses can be a challenge in itself, but once you do find them, they can be more of a challenge than you might expect. The classic “rule of three” applies to most of them, but not necessarily in the way you’re thinking, but every single one of them is really quite different. Their design is another example of the impressive visual flair displayed by Playtonic Games, but one or two feel a bit crudely put together as far as the actual fights are concerned.

I think that sums up Yooka-Laylee, really. The visual design is great, but the gameplay itself is often lacking. It does a wonderful job of instilling a sense of nostalgia in those of us who remember the golden ages of platform gaming, but as nice as that sounds, it isn’t enough. Rose-tinted glasses are often a curse, because going back to older games can sometimes highlight the problems and limits of that generation, especially when things have moved on so much in the years since. Playtonic Games seems to have worn those glasses, as the developers have forgotten to bring the game up to today’s standards, and the younger generation just won’t forgive its flaws. And neither can I.

No direction
Locks progress behind collectibles
Annoying speech sounds, some are unskippable
Quizzes...just...no

Yooka-Laylee could have been the start of a new generation of 3D platformers, but its design leaves it firmly stuck in the past.