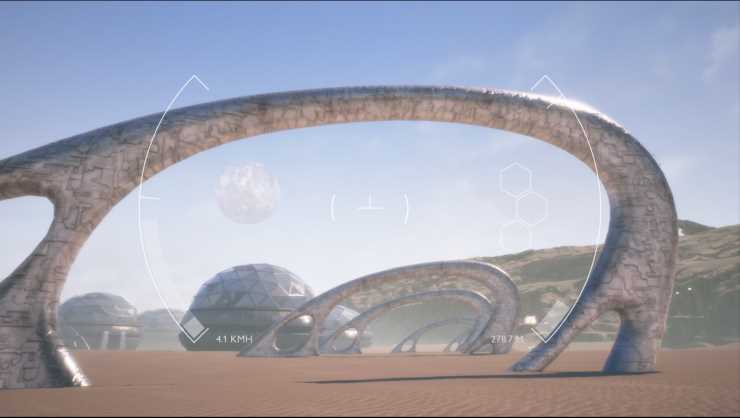 The idea of being lost and alone, far away from any sort of civilisation is a fear that everyone has. Being far away from your loved ones, with your life at stake on a daily basis was something that made the Matt Damon vehicle The Martian a much more satisfying tale to watch; Breached looks to tap into that idea. It’s a survival game that sees you having to locate resources on a hostile lonely planet so you can survive past the 7 day window lest you meet your end.

You play an unknown person by the name of Corvus Valott, you’ve been brought out of cryogenic sleep due to significant damage to your shelter, and need to repair it before all systems shut down and you die. To do this, you have to send scouting drones out to gather components to fix the air supply generator and minerals to synthesise fuel.

Your drones have a pretty simple control method, you use the left mouse button to accelerate, the right mouse button to break, and you move it around to, well, look around; what could be simpler? During exploration you have a bare minimum interface, detailing the speed you’re travelling, and the distance you are from a resource node. Your view crackles and distorts as you move around, freezing as you move out of range, and generating the kind of interference you would normally get from a security camera. The world around you looks like a terraforming experiment gone wrong, wind turbines rotate in the distance and enormous inactive structures dominate the skyline while the ground is littered with inactive drones – most likely from past failed missions to scavenge supplies. The locations aren’t devoid of threat either, dotted around are a selection of anomalies. When there’s one nearby your view starts to wash out and becomes distorted, the effect growing intensity as you get closer. Get too close and the magnetic force they produce will drag you in, cause your engines to fail and eventually kill your drone.

As bad as this seems, you’ll tend not to fear the anomalies at all, their presence is more an inconvenience than anything else. All these things seem to achieve is making your time darting around the environments a bit more interesting. As good as the locations look, they’re really bland in their feel, they’re large expanses but they feel really barren. With only four places to go to return visits are required, but rarely will you ever want to.

There is a danger element to Breached, but it comes in the form of what takes place between your time spent scouring the landscapes. All your actions consume Corvus’ energy, whether it’s scouting, hacking resource capsules for components, or synthesising fuel, and they all take differing amounts of it up. You’ll find that you only really have enough energy for around three actions per day before you need to rest for the next day’s expedition. As a mechanic it feels really arbitrary because it’s hardly the attitude to have when your life is on the line, if it were really me I’d be making much more of an effort to save my arse. During the game Corvus will make diary updates charting his diminishing mental state and his frustrations with what is going on around him, and what went on before. He finishes each one with hashtags to allow for easy future reference, and these allow you to see if there are past items that also relate.

As you read these entries, it becomes apparent that this isn’t the first time that Corvus has had to go through this, and this makes sense of all the inactive drones littering the landscape. How long has he been there? Decades? Centuries? That is unclear, but what is clear is how much he has deteriorated during this time, he laments his continued existence and questions the decisions of those that left him behind to die. Unlike the environments, the writing is quite absorbing and compels you to continue so you can find out how this situation came about.

A full playthrough is pretty short, lasting around two to three hours, and longevity is provided by repeat play to unlock all the diary entries. This in theory ties into the lore itself with Corvus obviously stuck in a cycle of Scavenge, rest, repeat. The question is, with the environments being too open and generally uninteresting to explore, would you really want to?

Breached is a game that wants you to play it again and again, but doesn’t provide enough reason to do so.