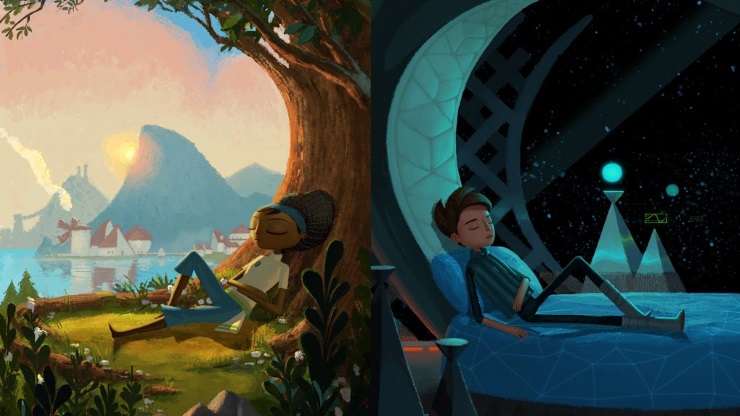 Cards on the table time: I’ve been against episodic games ever since finishing The Walking Dead’s first season. I’d rather just wait for the full thing to be out before getting engrossed in it and having a lengthy wait for the next part. But seeing it on the front page of Steam regularly, I decided to give Broken Age’s first act a go and it was jaw-droppingly good. Fast forward to nearly a year later and I’ve just experienced the complete Broken Age. It has been worth the wait and so much more. Act One feels like a mere appetizer now.

You play as Shay or Vella and experience each character’s take on the world they live in. Double Fine have managed to create two fantastic experiences that you juggle between, all in a single adventure game. The setting for both seems to be a silly fantasy world, but the themes are more serious than meets the eye. The worlds are filled with puzzles and riddles that often require switching between both protagonists, and this is where the puzzles really start to become taxing. It’s full of plot twists, and you can expect a cliffhanger or two before the satisfying conclusion. In the latter half, things get a little crazy thanks to the addition of Hexipals and wiring. So much so that I had to get a pencil and paper to start keeping track of things. But I never felt stupid, not even solving the hardest of puzzles – unlike Grim Fandango, where some things were too vague for their own good. I’m not going to ruin the any solutions here, but be prepared to test yourself when you reach puzzles that involve rewiring things.

Broken Age is full of memorable characters. The voice actings really brings them to life. Even having beaten the first act previously, I could still remember every character’s voice thanks to the care and polish that went into them during this full playthrough. The writing and vast amount of dialogue options in the conversation trees makes you spend a good amount of time getting to know everyone, which is a treat. There’s innuendo thrown around by some, while others just put a smile on your face. Minor characters are written better than most prime time TV show characters. It seems crazy to say my favourite character interactions in such a game happened with a talking tree and a man with birds in his beard, but there are characters that will resonate with everyone here, though things can get a little overwhelming at first with the amount of places and characters introduced during Vella’s side of the story. In a time where most games are going for photorealism or pixel art, Broken Age shines like a painting coming to life. Every area is a piece of art in its own right, and the character design is so well done. Animations have a distinct style and the only real problem is with the expressions during certain dialogue, as some of them don’t match the urgency or emotion in the script.

The world is filled with eclectic instrumentation that fits every scene perfectly, with the music that plays outside the cabin in the forest being a real highlight. I’ve actually been listening to it on loop all day while working. Given the high profile cast featuring the likes of Elijah Wood, Wil Wheaton, and Jennifer Hale, the end result shattered my expectations. I can’t think of a game with better voice acting in the last few years. Controls on console for a game made for PC are always a concern, but Broken Age has some interesting ways of controlling cursor movement on PS4 and on PS Vita. The left stick lets you scroll and the right one snaps the cursor to anything you can interact with. On the Vita, you get the best control scheme overall, with the option of using touch controls and physical controls. Speaking of the Vita, the loading times are a bit long. Having the screen remain black with no visuals or music is annoying, but that’s the only performance issue I experienced. Double Fine have even gone the extra mile with the the light bar on the DualShock 4 controller: it changes colour to match Shay or Vella depending on who you control.

Broken Age might be Double Fine’s best game, and topping it will require a Herculean effort. A more gradual puzzle difficulty increase would be nice, as it gets very hard, very suddenly, but Broken Age reminds me of why I love gaming. It’s not perfect, but you owe it to yourself to experience this wonderful, gorgeous game.

Load times on Vita version.
Difficulty spikes towards the close.

Incredibly polished, with gorgeous visuals and terrific voice acting, only some difficult late-game puzzles stop Broken Age from being the absolute pinnacle of the genre.