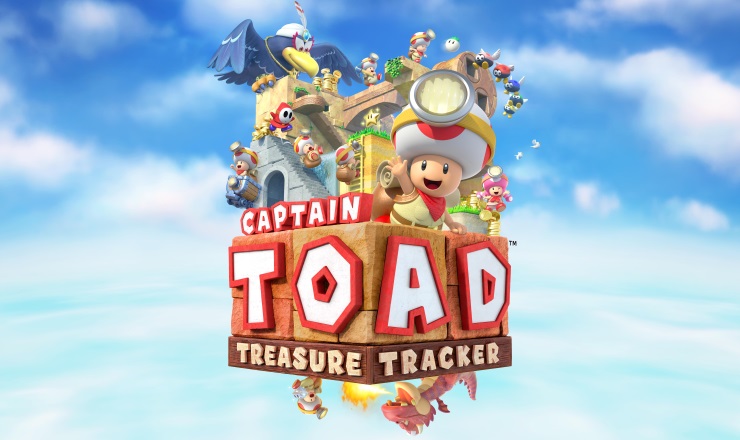 Super Mario 3D World was a majestic game, and one that boasted some incredibly high quality level design that, when combined with the HD-visuals we’ve now become accustomed to, was my personal game of year. Captain Toad: Treasure Tracker is exactly what you’d imagine: the wonderful Toad mini-games that were far too few in Mario World, with a few tweaks and changes – in fact, just enough to make a game of its own.

Now, that’s not to say that if you didn’t enjoy it in Mario World, suddenly you’ll fall head over heels in love. Essentially, Treasure Tracker is a puzzle-platformer that uses Captain Toad and Toadette as the playable characters, but employs camera controls to hide the solutions. You’ll have to use the motion controls built into the Wii U’s GamePad (or just the right analog stick, as I did) to move the camera around at length, revealing hidden gems secreted about the fifty-plus levels. Annoyingly, there’s no option to turn off the gyro controls, which causes minor frustration at times. Structurally, it’s slightly odd, as there are three books you play through, made up of individual levels and short playable vignettes that progress the story. Analogous to Mario’s non-stop tale of woe, Captain Toad and Toadette are adventuring to find stars, whereupon Toadette is captured by a humongous bird that nabs the star, and her with it. Book two switches the tale on its head, with Toad being the captive, and the third book is a more expansive set of levels, where the difficulty raises and you share equal time playing as either character.

“Treasure Tracker does
enough to justify
its existence”

As it borrows so heavily from the game it was born from, power-ups from said forefather also appear. Cherries to double, triple, or quadruple up Toad for certain levels and required puzzle solving, are one notable inclusion. Thankfully, the fabled Nintendo level design is in action again, and while Treasure Track has a very slow start, there are enough clever moments spaced out through the three books that make up the story to maintain forward momentum, and thoroughly compel you to complete the game. In fact, several of the boss levels are (design wise) some of the best on offer. Although they repeat, and follow the rule of three, each time you face any of the bosses, it’s highly entertaining. How Nintendo manage to make the same cut-scene make me smile three times, well, only they know. In fact, it’s not that long a game, really. You’ll comfortably barrel through the core levels in under six hours, going back in to complete additional objectives and gather the gems you missed the first time around in order to unlock further bonus levels. That said, it’s not a difficult campaign, either. As you progress there will be levels gated-off that require you to unlock them after collecting a set amount of gems. Only the final few levels required me to go back and grab a few, though – and I’d say about three levels posed a real difficulty. Instead, the completionist appears to be at the forefront of the developer’s minds.

Each single level has the same guidelines laid out in order to finish it: find your way to the end of the level and grab the star. Along the way you’ll also collect up to three hidden gems (and of course, you can grab coins for extra lives), but there’s also a secondary objective on every level. These vary from simply finding a golden mushroom, to grabbing a set amount of coins. But there are also level-specific challenges. For example, you might be running through a level where Shy Guys are your main foe, and the bonus objective will be to get through that course without alerting one of them. These bonus objectives only really serve to unlock more bonus levels, adding longevity to the game itself. Outside of the three story book campaigns, there’s a bonus book which offers up some levels from Super Mario 3D World that you can play through as Toad. It’s an odd choice, because Toad (and Toadette) can’t jump, so there are ladders added to the levels. Removing the element of Mario World that is fundamental to the game (the platforming) means that you are just walking carefully (and slowly) through them, and honestly, it’s just not much fun to do so. There are other bonus levels, of course, but I won’t spoil them here.

Treasure Tracker does enough to justify its existence, offering up a short campaign that, once finished, offers scant reason to come back again unless you’re in love with it. It’s a gorgeous game, as you’d expect, and for the entire run-time it’s fun, delivering that visual flair and level design that it seems only Nintendo are truly capable of providing.

A little too easy and not very long.
Can't turn off the gyro controls.
Only one save file.

The usual high quality Nintendo level design and charm makes up for the lack of challenge and longevity.