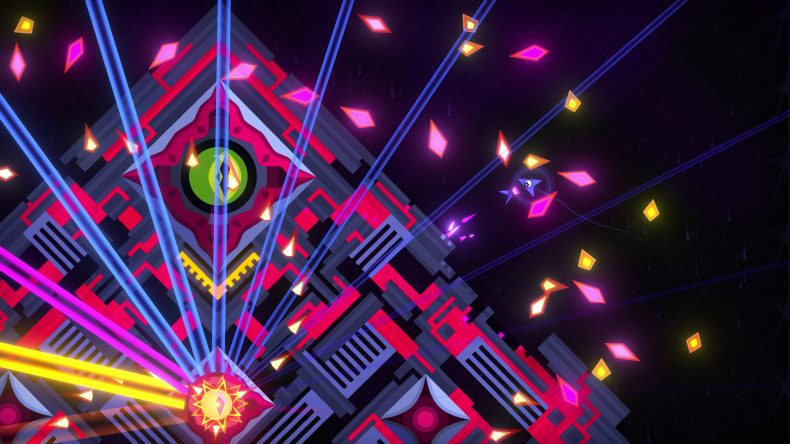 Sadly, despite what the title of this article suggests, this is not an evaluation of my local fish and chip restaurant. There’s not a battered sausage in sight, but don’t let that ruin the mood, because what’s on the menu is actually a pretty fun and addictive little twin-stick shooter.

Chippy in this instance has nothing to do with deep-fried potatoes but instead focuses on how you must chip away at the gargantuan enemies on screen. But this isn’t just a case of firing at a pixelated behemoth until their life bar is reduced to zero. No, by shooting at your foe, you’ll literally chip away at their angular carapace, which protects their core. When destroyed, an explosion will indicate success, and you will beat the level. But while just having levels that simply contain a big boss enemy to take down might feel a bit shallow, Chippy actually has a few tricks up its sleeve to keep things interesting. Firstly, as you chip away at the enemy, any parts which become detached from the main body of the boss will fall away and disappear permanently. This not only gives you a bit of breathing space to move around in but will likely open up a new angle to begin your next assault to chip away further. There are also certain rules in place to make things trickier. Individual turrets around the enemy need to be taken out first, either by destroying them outright or breaking the connection they have to the main body of the boss. There’s also only certain parts of the enemy which can take damage, so more often than not your shooting has to be pretty accurate to break off the right parts in order to wear your enemy down.

While all of this sounds simple, what I’ve failed to mention up to now is the sheer barrage of attacks the gargantuan monsters will throw at you. More often than not the screen will be filled with enemy fire, meaning you’ll forever be trying to dodge orbs, rockets, and other distractions whilst trying to keep your weapon fire on track to continuously damage their source. As the levels progress, what you’re required to deal with definitely ramps up, with direct laser beams firing from across the screen at you and even energy blasts that will follow your ship around for a period of time before disappearing. And that’s before you consider you need to keep an eye on the edges of the screen for incoming walls of more dangerous orbs you need to dodge. Oh, and did I mention that a single hit to your ship means it’s Game Over and you need to start again? Thankfully you do have a few things at your disposal to help balance up the odds a little bit. Upon doing successful amounts of damage to your enemy or wiping out turrets, you are rewarded with items that can give you the edge. These range from those that simply increase the damage you do with your weapon, to a shield which acts as an extra life should you get hit. Other items aim to get you out of a tight spot if dodging enemy fire becomes a bit tricky. You could have a Freeze item which pauses all moving obstacles giving you a few valuable seconds to navigate your escape or the Repel item which bounces enemy fire away from you, hopefully creating an opening. You can rotate which item you want ready to use at any point and they work really well against the fast-paced frantic action on-screen. More often than not, they serve as a last-ditch attempt at survival but work well to give you an opportunity to carry on, but are scarce enough so as to keep each level challenging.

Behind all the ducking, diving and shooting, there’s actually a pretty decent, upbeat soundtrack to accompany things. Its simple but quite infectious beats do a great job of marrying the high tempo, often hectic on-screen action and fuel your desire to keep going and overcome the sprawling adversary in front of you. Sporadically, little text boxes will also appear, your gigantic foe often mocking your attempts to succeed and overpower them, or commanding your imminent demise as they unleash their next flurry of attacks. It’s nothing ground-breaking but it serves to give your enemies a semblance of a personality, and it’s done so with a welcome edge of humour. Chippy feels incredibly familiar and intuitive and has enough of its own identity to make it worth a look. The challenge on offer is high and will require persistence and practice to master. But the leaderboard that tracks your progress (either as a % of each boss’s health you’ve managed to take down or based on the time taken to finish completely) works well to spur you on to improve your performance and beat others who have also taken up the challenge. There’s also an option to filter by friend performance for ultimate bragging rights. The controls are tight and responsive, and they need to be due to how much is going on at any one point. But the bosses always feels beatable, even if the odds aren’t stacked in your favour.

On paper, this is a twin-stick shooter and literally nothing more. This is just boss fight after boss fight. Rinse and repeat. But you get a sense that Chippy is fully aware of what it wants to be and sticks to its guns (pun intended) and as such delivers quite a tight and enjoyable experience. You’ll need to rely on your instincts, have eyes everywhere, and quite possibly a bit of luck to get through the challenges, but you’ll have a fun time doing so, over and over again.

Limited in scope
Too difficult for some

Chippy feels incredibly familiar and intuitive and has enough of its own identity to make it worth a look. The challenge on offer is high and will require persistence and practice to master.